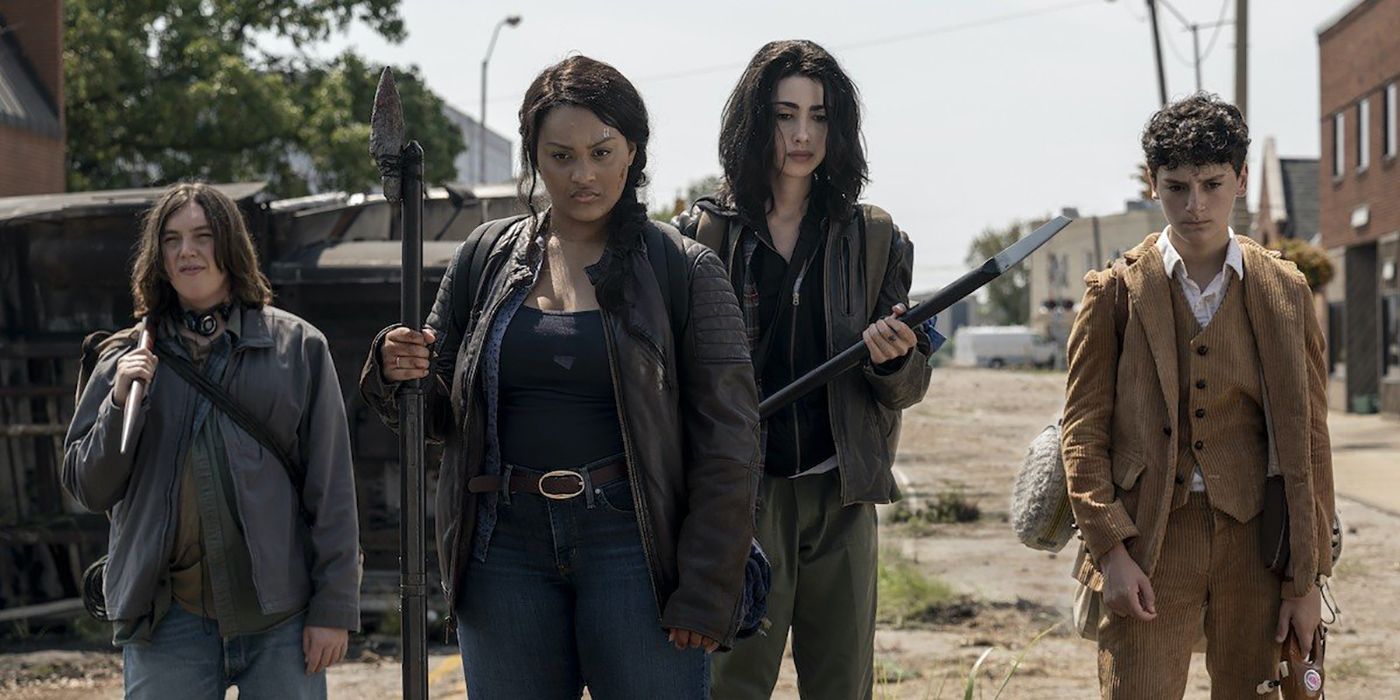 The group discusses Silas and Elton’s departure in Screen Rant’s exclusive clip from episode 109 of The Walking Dead: World Beyond. Set ten years after the zombie apocalypse outbreak, World Beyond is the second spin-off series to spawn from AMC’s The Walking Dead. The series focuses on a group of teenage survivors who have grown up in a sheltered community during the apocalypse. Unlike the other shows in the franchise, World Beyond tells more of a coming-of-age story, as the young survivors must quickly gain experience in the dangerous world of zombies, or “Empties.” The series premiered in October and was announced to only consist of two seasons, with season 1 set to conclude Sunday night with two back-to-back episodes.

The start of season 1 saw sisters Iris (Aliyah Royale) and Hope (Alexa Mansour) receive a message from their scientist father who may be in danger at a facility led by the mysterious Civic Republic Military, or CRM. With the help of friends Silas (Hal Cumpston), Elton (Nicolas Cantu), Felix (Nico Tortorella) and Huck (Annet Mahendru), the sisters set out on a journey beyond the walls to try to save their father. Over the course of the season, the characters have learned shocking truths about the world beyond their sheltered community, and each other. In episode 108 “The Sky Is a Graveyard,” the group contemplates the fate of Silas, who they believe may be a murderer. However, Silas, struggling with past traumas, decided to venture out on his own. Believing Silas to be innocent, Elton set off behind him to search for answers in hopes of clearing Silas’ name – just after Hope has revealed to him the truth about what really happened to his mother and sister.

In this exclusive clip from upcoming episode “The Deepest Cut,” Iris and Hope talk about their concern for Silas and Elton being out on their own. Meanwhile, Felix believes it’s “karma” that the group is moving on without Silas and Elton. You can watch the clip below:

In the penultimate episode, “The Deepest Cut,“a series of setbacks causes a member of the group to reevaluate their role in the mission. Someone makes a surprising discovery. A startling revelation casts everything in a new light.” The synopsis for the season finale “In This Life” reads, “A divided group struggles to reunite; others set their sights on the greater good.”

How Hope, Iris, Huck and Felix will deal with two members of their group now missing will likely be a big part of the upcoming episode. Many truths came to light in 108, including Hope’s darkest secret to Elton, meaning 109 will likely deal with the characters facing issues about themselves and each other. Based on the descriptions for the two final episodes, fans can expect even more big discoveries about members of the group.