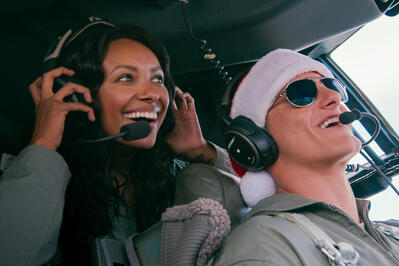 The Netflix Top 10 list won’t tell you how many people are watching a show, but it will tell you which shows people are watching the most. The Netflix Top 10 list for Friday, Nov. 6 is still topped by excellent limited series The Queen’s Gambit, but we have a brand new No. 2: a holiday-themed movie with Kat Graham and Alexander Ludwig called Operation Christmas Drop. There are some good titles a little further down the list, too, including the classic sketch comedy show Chappelle’s Show at No. 6 and the 2010 Emma Stone comedy Easy A at No. 7.

In this rom-com, a beautiful congressional aide is tasked with shutting down a tradition at a remote military base where pilots, led by a hunky Air Force officer, drop Christmas presents and other necessary supplies to the locals. It’s a real military tradition that no congressperson would ever actually try to stop, but a movie needs a premise. The movie was filmed on location in Guam at an actual functioning Air Force base, so that makes it unique. (Yesterday’s rank: n/a)

Mark Wahlberg loves to make movies with director Peter Berg. This is one of their five collaborations. It’s an action thriller about covert CIA operatives transporting a whistleblower through 22 miles of hostile terrain. It’s kinda confusing and dumb. (Yesterday’s rank: 3)

The title makes this seem like a Christmas rom-com, but it’s not. It’s every holiday. Emma Roberts and Luke Bracey play single people who make a deal to be each other’s dates to holiday parties, therefore avoiding awkward conversations about why they’re still single. Guess what happens. It’s a raunchy and retrograde bummer. (Yesterday’s rank: 4)

The legendary comedy show is now on Netflix. It’s still screamingly funny after all these years. What’s your favorite Chappelle’s Show quote? Mine is “He’s a habitual line-stepper.” (Yesterday’s rank: 8)

For fans of: Emma Stone, Clueless | Is it good?: Yeah, it’s pretty good

Like Clueless and 10 Things I Hate About You, this comedy takes a piece of classic literature — in this case The Scarlet Letter — and adapts it for a high school setting. It was Emma Stone’s first starring role, and it helped make her the Oscar-winning star she is today. The movie itself is just OK, but she’s terrific. (Yesterday’s rank: 5)

Joseph Gordon-Levitt plays NSA whistleblower Edward Snowden in Oliver Stone’s biographical drama about Snowden’s life and his leak of classified information about government surveillance to journalists. It’s not a great movie, and if you’re really interested in learning more about Snowden and the information he liberated, the documentary Citizenfour, footage of which gets incorporated into Snowden, is a better bet. (Yesterday’s rank: 6)

Ewan McGregor, Naomi Watts (who was nominated for an Oscar for her performance), and young Tom Holland star as a family who gets separated during the devastating 2004 Indian Ocean tsunami and have to struggle to survive and find each other again. It’s a powerful true story. (Yesterday’s rank: n/a)