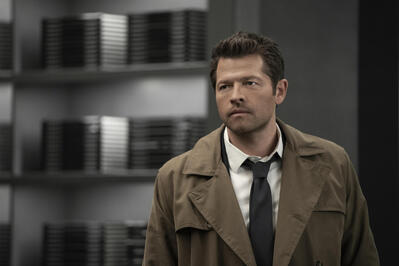 [Warning: The following contains spoilers for Thursday’s episode of Supernatural, “Despair.” Read at your own risk!]

To say that a lot happened in Thursday’s episode of Supernatural is a gross understatement. Jack (Alexander Calvert) nearly died (well, he exploded in the Empty but walked away virtually unscathed), everybody from Apocalypse World went poof, a la Avengers: Infinity War, while Sam (Jared Padalecki) and Jack helplessly watched (raise your hand if Donna’s terrified “Sam?!” delivered the same gut punch as Peter Parker’s “Mr. Stark, I don’t feel so good”), and Castiel (Misha Collins) made the ultimate sacrifice for Dean (Jensen Ackles) after finally realizing that true happiness comes from within.

Castiel’s sacrifice completes the deal he made in Season 14 to save Jack’s life. Rather than leave the young Nephilim condemned to the Empty forever, Cas agreed to take Jack’s place — bargaining a soul for a soul. However, the deal didn’t go into effect immediately. It was only when Cas finally achieved true happiness that he’d be yanked to the Empty and rest there for eternity. That bittersweet moment came at the end of Thursday’s episode, with Death (Lisa Berry) literally banging on the door, and Cas and Dean bracing for the end.

The moment led Cas to tell Dean what he had learned over the years. “Happiness isn’t in the having, it’s in just being. It’s in just saying it,” Castiel said. “Everything you have ever done — the good and the bad — you have done for love. You fought for this whole world for love. That is who you are. You’re the most caring man on Earth. You are the most selfless human being I will ever know. Ever since we met, ever since I pulled you out of hell, knowing you has changed me. Because you cared, I cared. I cared about you, I cared about Sam, I cared about Jack. I cared about the whole world because of you. You changed me, Dean.”

Then, in a heartbreaking goodbye, Cas told Dean, “I love you,” and allowed the Empty to claim him — along with Death — leaving a devastated Dean behind.

Cas’ symbolic death marks a full-circle journey for the beloved character, who evolved from a callous celestial being to someone who finally understood what it means to be human. Speaking to TV Guide weeks before the episode aired, Collins reflected on Castiel’s remarkable journey across 12 seasons.

“One of the interesting things about working on a character for so long is that the character naturally just evolved. Castiel is different now than he was when the show started,” Collins told TV Guide. “It was really interesting as an actor to experience the subtle transitions that happened over time with Castiel that were not even necessarily conscious choices. It was just like, he’s now more familiar with humans and how they interact with one another, so he’s not quite as much of a fish out of water as he used to be.”

Collins continued, “Castiel has downloaded all pop cultural references, and so he understands the nuance of a culture now in a way that he didn’t before. All of these strata of different experiences layered on top of each other to gradually alter the character of Castiel and the relationships that he had with Sam, and Dean, and Jack, and all the other important characters on the show over time. Being able to experience the subtlety of that evolution over time was really interesting and not something that I imagine that I’ll ever have again in my career.”

The next episode of Supernatural airs Thursday at 8/7c on The CW.

The Supernatural series finale is set to air on Thursday, Nov. 19 at 9/8 on The CW, preceded by the hour-long special, “Supernatural: The Long Road Home” at 8/7c.