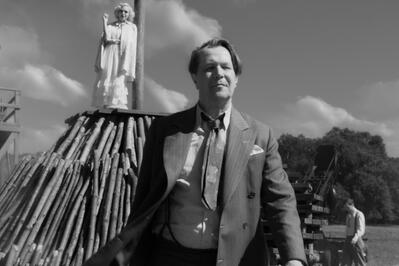 To a successful film director, Orson Welles looms like Shakespeare to a playwright, Mozart to a composer, Frank Lloyd Wright to an architect. Welles’s 1941 film Citizen Kane (perhaps you’ve heard of it?) is a lodestar for technical and creative innovation in mainstream cinema, and the guy did it at the age of 25. Not too shabby.

Welles’s thinly veiled and highly unauthorized biography of William Randolph Hearst, a media titan the likes of which there is no parallel for today, was immediately controversial. Hearst’s fruitless battle to keep Kane out of cinemas is a well-known story; indeed, the 1999 making-of-Kane film RKO 281 focuses primarily on this. But “true heads” know of a second struggle, the argument over who deserves credit for writing the screenplay. Kane‘s sole Oscar win was a shared writing award to both Welles and one Herman J. Mankewicz.

Mank, David Fincher’s extremely Awards Season feature for Netflix, tells the Mankewicz tale. The fight over authorship, what some classic Hollywood buffs might be looking for, doesn’t really come into it until the end. Indeed, Mank is a film with a very loose focus. Like Citizen Kane, which it mimics in its lighting, sound design, and some crafty shots, it jumps back and forth in time. What it does not share, to its detriment, is a specific mystery. It has no “Rosebud.” It is a portrait of a guy who observes life in Hollywood at the dawn of World War II, has some vague anti-establishment sentiments, then, after an auto accident lays him up, accepts Welles’ assignment to draft a vituperative screenplay.

Mank isn’t boring. It looks great (high contrast black & white is always welcome!) and the zings, care of Jack Fincher, David Fincher’s late father, run fast and fierce. Gary Oldman is quite good as the somewhat saggy, mopey, seen-it-all drunkard with just enough gas in the tank for one last good one. In early scenes he pals around with his brother (Joseph L. Mankewicz, who would grow into a writer-producer-director of great importance) and writers like Ben Hecht, George S. Kaufman, and S.J. Perelman, all working for greedy studio mogul Louis B. Mayer and his lackey, producer Irving J. Thalberg.

Fincher shows the poisonous side of capitalism, and can even divide a group that should be working together. You might need your radar tuned to the right wavelength to pick up on this, but all the major characters in the flashback Hollywood scenes are Jewish. (It’s barely mentioned, but the signifiers are there.) But Mayer and Thalberg, the bosses, are quick to throw workers, even their co-religionists at the dawn of near-genocidal anti-Semitism, under the bus in pursuit of power.

This realization opens Mankewicz’s eyes to corruption and, paired with his observations when he is “called to court” by Hearst and attends dinner parties in San Simeon, he is further driven to take his shot for the good of his colleagues and working people everywhere.

The problem, from a cinematic side, is it concludes with a big fat “so what.” So he wrote a movie with a fictional portrait of William Randolf Hearst growing from bright-eyed and bushy-tailed to a lumbering, sad fool. Great movie, don’t get me wrong (especially the way Welles filmed it) but if it was in fact a tremendous moral victory, Mank collapses before crossing the finish line and never shows us this.

Best New Shows and Movies on Netflix This Week: Dash & Lily, The Liberator

It also takes a really long time to get moving. At about the 70-minute mark of Mank, despite digging its look and enjoying its mellifluent dialogue, I turned to my wife and asked “any idea when this movie is going to start?!?” It just felt like an engine revving and revving but never turning over. (For what it’s worth, my wife, who had no obligation to keep watching, eventually went in the other room to speak with a friend, calling back “you can keep watching without me.” Later that night, she did not ask “how did Mank end?”)

There are a lot of great movies about Old Hollywood. Go watch Barton Fink or Hail, Caesar! or Sullivan’s Travels for something funny, or The Bad and the Beautiful for something a little more melodramatic. Beyond people who are really committed to Turner Classic Movies or listening to the “You Must Remember This” podcast, I’m not quite sure who is going to be all that interested in Mank. It is surprisingly lacking in tension for the director who brought us Zodiac and The Social Network.

The first thing they tell you in any screenwriting class is that drama demands relatable stakes. Yet this story about a screenwriter seems eager to just shamble along without much real conflict. In my opinion, it could have used a rewrite.

Mank premieres in theaters on Friday, Nov. 13 and on Netflix on Friday, Dec. 4.