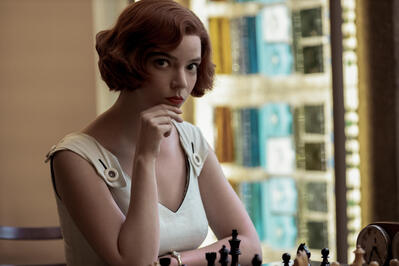 The Netflix Top 10 list won’t tell you how many people are watching a show, but it will tell you which shows people are watching the most. The Netflix Top 10 list for Thursday, Nov. 5 is still topped by excellent limited series The Queen’s Gambit, but there are some interesting new titles a little further down the list: the 2010 Emma Stone comedy Easy A at No. 5, and at No. 8, the classic sketch comedy show Chappelle’s Show.

Based on Netflix’s Top 10 from Wednesday, Nov. 5

Mark Wahlberg loves to make movies with director Peter Berg. This is one of their five collaborations. It’s an action thriller about covert CIA operatives transporting a whistleblower through 22 miles of hostile terrain. It’s kinda confusing and dumb. (Yesterday’s rank: 7)

The title makes this seem like a Christmas rom-com, but it’s not. It’s every holiday. Emma Roberts and Luke Bracey play single people who make a deal to be each other’s dates to holiday parties, therefore avoiding awkward conversations about why they’re still single. Guess what happens. It’s a raunchy and retrograde bummer. (Yesterday’s rank: 2)

For fans of: Emma Stone, Clueless | Is it good?: Yeah, it’s pretty good

Like Clueless and 10 Things I Hate About You, this comedy takes a piece of classic literature — in this case The Scarlet Letter — and adapts it for a high school setting. It was Emma Stone’s first starring role, and it helped make her the Oscar-winning star she is today. The movie itself is just OK, but she’s terrific. (Yesterday’s rank: n/a)

Joseph Gordon-Levitt plays NSA whistleblower Edward Snowden in Oliver Stone’s biographical drama about Snowden’s life and his leak of classified information about government surveillance to journalists. It’s not a great movie, and if you’re really interested in learning more about Snowden and the information he liberated, the documentary Citizenfour, footage of which gets incorporated into Snowden, is a better bet. (Yesterday’s rank: 8)

Colorful objects, preschool songs, and big-headed babies make this catnip for toddlers and younger kids who get screentime. (Yesterday’s rank: 5)

One of the most surprising entries into the Top 10 is this French film about corrupt cops and violent gangs in Marseilles, France. If you want guns, guns, guns and don’t really care about plot and character arcs, it will do the trick. (Yesterday’s rank: 4)