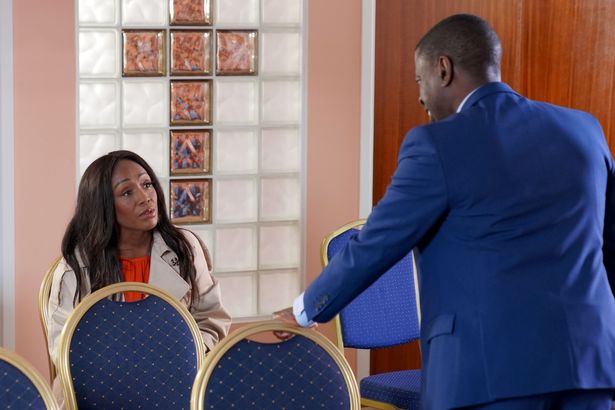 EastEnders’ Denise Fox struggles to bond with her baby son Raymond in upcoming scenes after taking him back from his adoptive parents.

She tells a concerned Jack Branning (Scott Maslen) bout her battle, and he offers to help pay for a specialist for her son.

He also suggests to Denise (Diane Parish) that she contact someone from Raymond’s past to help.

Denise remembers that Raymond’s adoptive father was a pastor at a Pentecostal church so she decides to start there.

Sharon Watts (Letitia Dean) is keen to get Ian Beale (Adam Woodyatt) out of her place but Ian is yet to tell her about his falling out with Kathy Beale.

He was supposed to be taking care of Max Branning’s money during his divorce to Rainie Highway (Tanya Frank).

But when Max demanded it back and with interest – he used his mum’s cafe without her permission.

Will this be the final straw to make Sharon kick Ian out for good?