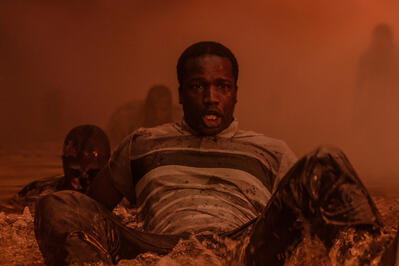 Netflix’s Top 10 list is like a never-ending horse race with shows jockeying for position, fading, then ultimately being sent to the glue factory at alarming rates (we miss you, GLOW!). But because Netflix never reveals proper ratings, it’s pretty much the only way we know whether or not a series or movie is doing well. The first week of November sees two new movies crack the Top 4: the French action-thriller Rogue City and the British horror movie His House. And, for some reason, Adam Sandler’s Hubie Halloween returned to the Top 10… after Halloween.

The title makes this seem like a Christmas rom-com, but it’s not. It’s every holiday. Emma Roberts and Luke Bracey play single people who make a deal to be each other’s dates to holiday parties, therefore avoiding awkward conversations about why they’re still single. Guess what happens. It’s a raunchy and retrograde bummer. (Friday’s rank: 1)

Future superstar Anya Taylor-Joy (she’s been cast as young Furiosa in the next Mad Max movie) stars in this literary adaptation as Beth Harmon, a brilliant but troubled chess champion in 1950s Kentucky. She was an orphan who, in her youth, developed an incredible skill for the game but also a debilitating addiction to pills, which quiet her obsessive mind. It’s a detailed character study of brilliance and madness that’s usually reserved for male characters. It comes from one of Netflix’s go-to limited series producers, Godless‘ Scott Frank. (Friday’s rank: 2)

One of the most surprising entries into the Top 10 is this French film about corrupt cops and violent gangs in Marseilles, France. If you want guns, guns, guns and don’t really care about plot and character arcs, it will do the trick. (Friday’s rank: n/a)

For fans of: Get Out, The Haunting of Hill House/Bly Manor | Is it good?: Heck yeah!

This haunted house movie adds a spin to set itself apart from the others: It follows a pair of Sudanese refugees who get asylum in London, but the government housing they are put in is riddled with spirits. His House isn’t just scary, but a terrifying look at what refugees go through to escape the countries and dictators they are fleeing from. (Friday’s rank: n/a)

5. Secrets of the Saqqara Tomb

For fans of: Ancient Egypt | Is it good?: Yes

This docuseries follows a team of Egyptian archaeologists as they explore a previously undiscovered tomb that had been miraculously untouched for over 4000 years. It’s a fascinating look at an extraordinary historical find. (Friday’s rank: 6)

This moving animated family musical is inspired by a Chinese folktale about the moon goddess Chang’e. A girl whose mother died builds a rocket ship to the moon to prove that the moon goddess is real. Oscar winner Glen Keane directs, and the voice cast includes Philippa Soo, John Cho, Margaret Cho, and Ken Jeong. (Friday’s rank: 5)

7. The Haunting of Bly Manor

Season 2 of the moody, emotionally heavy horror anthology (the first was The Haunting of Hill House) is loosely based on Henry James’ The Turn of the Screw. If you don’t go into it expecting a Hill House redux, you won’t be disappointed, because Bly Manor is really good, but it’s different. [TV Guide review] (Friday’s rank: 8)

A Germanic tribe battles the Romans in 9 A.D. in this German-language historical epic. It should hold you over until Vikings: Valhalla comes to Netflix, as it’s definitely a show you’d recommend to Vikings fan. (Friday’s rank: 4)

For fans of: The video game Hades, the anime Castlevania | Is it good?: It’s ambrosia for fans of anime

The newest original anime from Netflix is this violent new take on Greek mythology following a young man who learns he’s the son of Zeus and must fight off an army of demons. It’s a cartoon, but it ain’t for kiddos! (Friday’s rank: 3)

For fans of: Sandler at his silliest | Is it good?: Honestly, yes

Adam Sandler’s latest Netflix comedy finds itself back on the list a few days after Halloween? I couldn’t tell you why. Did you see anyone dressed up as Hubie Halloween for Halloween? (Friday’s rank: n/a)