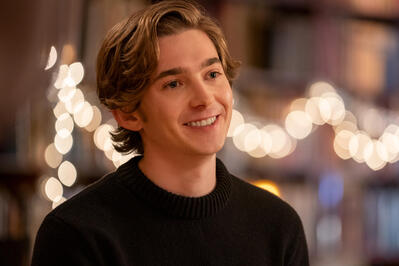 The Netflix Top 10 list won’t tell you how many people are watching a show, but it will tell you which shows people are watching the most. The Top 10 list for Thursday, Nov. 12 finds Christmas rom-com series Dash & Lily rising from No. 5 to No. 2, but it’s still behind the excellent limited series The Queen’s Gambit, which is at No. 1 for the tenth day in a row. The only new title on the list is true crime limited series Trial 4, which has debuted at No. 6.

Dash (Austin Abrams) and Lily (Midori Francis) court each other by leaving notes to each other with comfort zone-expanding dares in a secret book at Manhattan’s famous Strand bookstore. It’s cute and will put you in a cheerful mood. [TV Guide review] (Yesterday’s rank: 5)

Ewan McGregor, Naomi Watts (who was nominated for an Oscar for her performance), and young Tom Holland star as a family who gets separated during the devastating 2004 Indian Ocean tsunami and have to struggle to survive and find each other again. It’s a powerful true story. (Yesterday’s rank: 2)

The legendary comedy show is now on Netflix. It’s still screamingly funny after all these years. What’s your favorite Chappelle’s Show quote? Mine is “He’s a habitual line-stepper.” (Yesterday’s rank: 3)

Mark Wahlberg loves to make movies with director Peter Berg. This is one of their five collaborations. It’s an action thriller about covert CIA operatives transporting a whistleblower through 22 miles of hostile terrain. It’s kinda confusing and dumb. (Yesterday’s rank: 4)

For fans of: Justice | Is it good?: Yes, and it’s infuriating, too.

This limited docuseries tells the story of Sean Ellis, a Black man who was wrongfully convicted for the murder of a white Boston police officer. The timely documentary explores issues of police corruption and racism in the judicial system, and if you care about injustice, it will make you sick. (Yesterday’s rank: n/a)

In this rom-com, a beautiful congressional aide is tasked with shutting down a tradition at a remote military base where pilots, led by a hunky Air Force officer, drop Christmas presents and other necessary supplies to the locals. It’s a real military tradition that no congressperson would ever actually try to stop, but a movie needs a premise. The movie was filmed on location in Guam at an actual functioning Air Force base, so that makes it unique. (Yesterday’s rank: 6)

A&E’s docuseries follows undercover volunteers as they get incarcerated for 60 days to expose illegal activity inside the jail (among the inmates, not the corrections officers). The season currently available on Netflix is set in Arizona’s Pinal County Jail. It’s a harrowing look at life on the inside, with extremely high stakes. You worry for the participants’ safety. (Yesterday’s rank: 10)