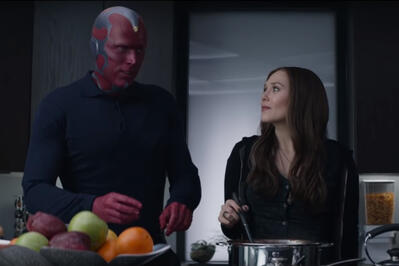 We are getting closer and closer to the debut of the first Disney+ MCU TV show. WandaVision finds Elizabeth Olsen and Paul Bettany reprising their roles of Wanda Maximoff, aka Scarlet Witch, and Vision, an artificial intelligence brought to life by the Mind Stone embedded in his forehead. Although Disney+ and Marvel have managed to keep a lot of details about the show under wraps, we’re finally starting to learn more about what to expect from the series. Here’s everything you need to know.

It’s set to premiere in January. In November, Marvel Studios announced on Twitter that WandaVision will debut on Disney+ on Friday, Jan. 15.

The coronavirus pandemic has delayed a lot of Marvel shows and movies, including Marvel’s The Falcon and the Winter Soldier, but production on WandaVision was closest to being completed at the time of the shutdown. (The Falcon and the Winter Soldier has resumed production, but it is unclear when the series will debut after the COVID-19 delay. Marvel has also not announced updates for two other Disney+ series: Loki, which was originally set for spring 2021, and Hawkeye, which was set for fall 2021.)

We have the first footage. Disney+ released a spoiler-tastic trailer for WandaVision, which you can watch above, during the 72nd Primetime Emmy Awards, and we’ve clocked a few major reveals. We already knew that the show would be a blend of popular sitcoms and the Marvel Cinematic Universe, but this new trailer gave us our first look at Teyonah Parris as Monica Rambeau. The trailer also happened to suggest that Vision is, in fact, dead just as he was in the final Avengers film. Glitches in the trailer also imply that Wanda might be in a simulation of some sort, which would explain all the wonky TV references.

It’s an homage to classic television. As revealed at Disney’s D23 Expo in August 2019, WandaVision is part classic sitcom, a la The Dick Van Dyke Show, and part Marvel blockbuster. “The show is a love letter to the golden age of television,” Jac Schaeffer, the show’s head writer, told Entertainment Weekly. “We’re paying tribute and honoring all of these incredible shows and people who came before us, [but] we’re also trying to blaze new territory.”

As a nod to the classic sitcoms WandaVision is inspired by, the premiere episode was filmed in front of a live studio audience and shot in black and white, with crew members coming to set dressed in ’50s clothings and using period lenses and lighting. When Vision’s typical maroon skin didn’t show up well in grayscale, the makeup artists painted Bettany blue instead.

Dick Van Dyke himself even acted as something of a consultant, as Marvel Studios president Kevin Feige and director Matt Shakman revealed to Entertainment Weekly. Feige and Shakman took Van Dyke to lunch in 2019 to get his take on, among other things, how his classic sitcom made silly physical comedy feel so grounded. “His answer was really simple: He basically said that if it couldn’t happen in real life, it couldn’t happen on the show,” Shakman said.

We still don’t know how or if Vision is alive. Vision was killed by Thanos (Josh Brolin) in Avengers: Infinity War when the latter removed the Mind Stone from Vision’s forehead to complete his Infinity Gauntlet. Because of that, unlike Wanda and everyone else who disappeared after the Snap, Vision didn’t return when Hulk (Mark Ruffalo) brought them back in Avengers: Endgame. The series is set post-Endgame, and as far as we know, Vision remains dead — so how is he in the show?

We’ll see a more intimate side of Wanda and Vision. The series begins with Wanda and Vision happily married and living in an idyllic town called Westview. “We find Wanda and Vision living a blissful suburban existence, trying to keep their powers under wraps,” Schaeffer explained to Entertainment Weekly. But as they begin to cycle through the decades, they realize their life may not be as perfect as it seems.

The show will be borrowing characters from other corners of the MCU. Kat Dennings, who appeared in the first two Thor films as Darcy Lewis, and who might actually best be remembered for always mispronouncing Mjolnir, will appear in the show. Meanwhile, Randall Park will reprise his role as Jimmy Woo from Ant-Man and the Wasp.

We know of at least two new cast members. Teyonah Parris was announced at San Diego Comic-Con in 2019 to be playing the grown-up version of Monica Rambeau, the little girl from Captain Marvel. It’s unclear how Monica will factor into the show, but in the comics, she takes up the title of Captain Marvel along with the moniker Photon. Meanwhile, Kathryn Hahn is joining the MCU in what has been described as a nosy neighbor type of character. (Fun fact: Hahn previously voiced Doc Ock in Sony’s Spider-Man: Into the Spider-Verse, which is not part of the MCU.)

Based on what happens in the series, a second season probably isn’t in the cards. When asked if they’d return for a second season while promoting the series at Disney’s D23 Expo, Olsen told TV Guide that she “didn’t think it would make sense.” Despite this, both actors said they’d love to return for more if that is possible in the future. “I agree with what she said, but we’re always ready to come back,” said Bettany.

It will lead directly into the Doctor Strange sequel. Previously, MCU movies have existed separately from Marvel’s television shows, even those that existed within the interconnected universe. But the Disney+ limited series are part of Phase Four of the Marvel Cinematic Universe, which means they exist at the same level as the films and will play into everything as the MCU moves forward. The best example of this is how this series will lead directly into Doctor Strange‘s sequel, Doctor Strange in the Multiverse of Madness, as Olsen is set to co-star in the movie alongside Benedict Cumberbatch.

WandaVision is coming to Disney+ in late 2020.