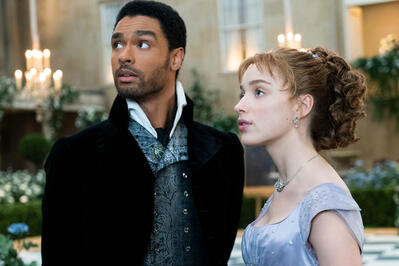 The Netflix Top 10 list won’t tell you how many people are watching a show, but it will tell you which shows people are watching the most. The Top 10 list for Thursday, Jan. 7 sees the Karate Kid continuation series Cobra Kai and Shonda Rhimes’ period piece Bridgerton continuing to hold the top two spots, as they have all week. The Nicolas Cage-hosted series History of Swear Words, the Adventures of Sharkboy and Lavagirl in 3-D sequel We Can Be Heroes, and the Zac Efron comedy 17 Again round out the top 5.

Based on Netflix’s Top 10 from Thursday, Jan. 7

Nicolas Cage hosts this educational series that tells you where all your favorite expletives came from. Learn something, and delight in the joy of hearing Cage say the F-word a bunch of times. (Yesterday’s rank: 3)

Zac Efron gives one of his funniest (and earliest) performances in this comedy about a man (Matthew Perry) who wakes up as his 17-year-old self (Efron) after an accident. What else is there to say? It’s still a great movie! (Yesterday’s rank: 7)

Liam Neeson stars as a man who awakens from a coma to discover that someone has stolen his identity, his wife doesn’t recognize him, and also he’s being chased by assassins. He teams up with a mysterious woman (Diane Kruger) in effort to prove who he is. (Yesterday’s rank: 5)

Remember the era of stoner action comedies that were always about a bunch of dudes getting themselves into trouble? This is very much that. Jesse Eisenberg stars as a pizza delivery driver who, through a series of unfortunate events, finds himself with a bomb strapped to his chest that will detonate unless he robs a bank in 10 hours. He drags his best friend (Aziz Ansari) into the whole mess, and as you can imagine, hijinks ensue. Danny McBride and Nick Swardson co-star. (Yesterday’s rank: 8)

A girl and her cat sidekick go on a series of adventures inside a dollhouse, and kids are almost guaranteed to enjoy watching them do so. (Yesterday’s rank: n/a)