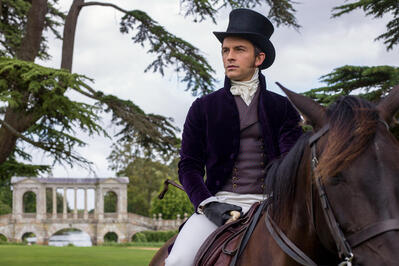 Mercy, me! You just finished watching the first season of Netflix’s Bridgerton and now you’re ready for more steamy romance between dapper dudes and gowned gals, preferably with charming accents that will stir your insides. Shonda Rhimes’ new series showed that period pieces don’t have to be stuffy melodrama for your grandmama, but can be titillating tales of sins and secrets among attractive aristocrats. So what should you watch after bingeing Bridgerton?

We’ve come up with a list of shows that feature many of the elements also featured in Bridgerton, whether it be the sexiness of lustful hookups, copious amounts of scandal and gossip, or the surprisingly modern tone of historical dramas reworked for today’s audiences.

Bridgerton is full of sex, scandal, and ladder-climbing, but what keeps it all chugging along is the voiceover from the anonymous Lady Whistledown (Julie Andrews), who ramps up the pearl-clutching by feeding the town gossip in the form of a newsletter that tracks all the lasciviousness and comings and goings of high society. Her ability to influence the actions of the characters on screen is reminiscent of the Nosy Parker of The CW’s Gossip Girl, a tittle-tattle who ran a blog that recounted the ins and outs of wealthy high school socialites in Manhattan. Bridgerton was wise to mimic the Gossip Girl device, as it constantly puts pressure on its characters to impress, or fail spectacularly trying to do so, while also providing a sip of mystery in determining who the narrator is. Gossip Girl is also worth a watch as it catapulted its young cast — Blake Lively, Leighton Meester, Penn Badgley, Chace Crawford, Ed Westwick, and more — to stardom.

Where to watch: Amazon Prime Video

Jane Austen isn’t the only author whose influence is plainly seen in Bridgerton. William Makepeace Thackeray took shots at British high society in his 1847 serial Vanity Fair, which was adapted by Amazon Prime Video in 2018’s delightful seven-episode series of the same name. Less about the sex and more about the efforts of advancing among the elite, Vanity Fair stars Olivia Cooke as Becky Sharp, an extremely cunning and charming young woman who upends every idea of what a lady should be at the time as she elbows her way to the top, and Cooke is an absolute treasure in the role. Of course, Becky’s plans get complicated when her heart gets in the way, thanks to leading man Tom Bateman.

Where to watch: Apple TV+

If Bridgerton was your first binge of a period piece that’s been unstuffed from the rigid stuffiness of the typical old-timey drama, then Apple TV+’s Dickinson is like a direct wormhole between today’s millennials and 19th century author Emily Dickinson. Emily, played by the wonderful up-and-comer Hailee Steinfeld, has aspirations to become a famous writer, while her traditional parents (Toby Huss and Jane Krakowski) prefer she settle down and be a housewife. The timeless story and era-appropriate clothing and sets are injected with modernity through present-day music (full on blasting tracks, not the undercover string quartet covers that Bridgerton did) and dialogue (pretty sure they didn’t say “stoked” back then), adding a fresh coat of paint to a genre otherwise reserved for the olds. Also of extreme importance, Wiz Khalifa appears as Emily’s obsession, Death.

Another period drama about love in 1800s England, HBO’s Gentleman Jack thankfully shows an alternative to the heteronormative romance and sexuality that dominates many of the other shows on this list. In a stirring performance, Suranne Jones portrays Anne Lister, a real historical figure who was a prominent landowner and industrialist. She also happened to be a lesbian, and courts her fellow landowner Ann Walker (Sophie Rundle) while recording the courtship through a series of cryptic messages that only she can decode. The first season premiered in 2019 on HBO, with a second season coming soon.

Where to watch: Amazon Prime Video

If it’s sweeping romance with British accents that you’re looking for, PBS’s Poldark, with its endless sunsets, waves crashing on many rocky shores, and horseback rides along countless beaches, fits the bill. If it’s a ridiculously handsome man with ripped abs walking shirtless out of the ocean that you also want, well, Poldark has that too. The series, now five seasons in, stars Aidan Quinn as Captain Ross Poldark, a Revolutionary War veteran who, after he was believed to have perished in the fight, returns home to Cornwall to find his girlfriend engaged to his cousin (oops) and his father dead. The series, based on Winston Graham’s novels, moves at a blistering pace as Poldark rebuilds his life and finds new love and more reasons to take his shirt off.

Obviously Bridgerton isn’t Shonda Rhimes’ first shot at television, but instead of checking into Grey’s Anatomy, Private Practice, or How to Get Away With Murder, get embroiled in some Scandal. Scandal was Shonda’s sexiest broadcast show, starring Kerry Washington as a fixer with her own crisis-management firm whose affair with a governor (Tony Goldwyn) gets even more heated and scandalous when he becomes president of the United States. It’s got all the shocks and twists you’re looking for, but a little bit more murder and political machinations.

Bridgerton is now available on Netflix.