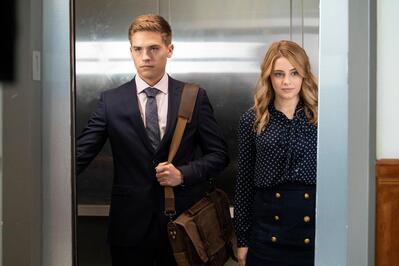 The Netflix Top 10 list won’t tell you how many people are watching a show, but it will tell you which shows people are watching the most. The Top 10 list for Wednesday, Dec. 23 sees After We Collided, the romantic sequel to 2019’s After, taking the No. 1 spot, bumping How the Grinch Stole Christmas to No. 2. Kids’ cartoon Cocomelon, ballet drama Tiny Pretty Things, and the Ariana Grande concert doc Excuse Me, I Love You round out the top 5 today.

For fans of: Romance, Dylan Sprouse | Is it good?: Not really, but if you’re already a fan of the series you’ll probably at least appreciate it

The sequel to 2019’s romantic drama After — which, for everyone keeping track, is the movie inspired by Harry Styles fanfiction — is about as cringeworthy as its predecessor, but with this time 100% more Dylan Sprouse. After We Collided catches us up with Tessa (Josephine Langford) and Hardin (Hero Fiennes-Tiffin), who are going through a fraught breakup that is disrupted by the arrival of Trevor (Sprouse), Tessa’s new coworker. (Yesterday’s rank: n/a)

2. How the Grinch Stole Christmas

Jim Carrey’s 2000 adaptation of the Dr. Seuss book has become a holiday classic for plenty of people. If you’re a fan, you’ve probably already made a plan to revisit it for the holidays. (Yesterday’s rank: 1)

Colorful objects, preschool songs, and big-headed babies make this catnip for toddlers and younger kids who get screentime. (Yesterday’s rank: 4)

After the star student at an elite ballet academy suffers an accident, her replacement is thrown into a cutthroat world where almost all the students seem to be in vicious competition with each other. It’s pretty over the top in its soapiness. (Yesterday’s rank: 3)

5. Ariana Grande: Excuse Me, I Love You

For fans of: Pop music, concerts, talent | Is it good?: It’ll make you an Arianator if you’re not already

Ariana Grande is one of our greatest pop stars, so it’s a pleasure to be able to see her perform in this concert doc that centers on her 2019 Sweetener World Tour. She plays all the hits and, as a bonus, tells a very ridiculous story about the time her dogs got diarrhea while she was on the phone with Kristin Chenoweth. It’s fun! (Yesterday’s rank: 2)

In the sequel to 2018’s The Christmas Chronicles, Kurt Russell and Goldie Hawn return as Santa and Mrs. Claus, which is pretty delightful all on its own. There’s also a plot here, though, with Kate Pierce (Darby Camp), who has grown into a cynical teen, reuniting with the Clauses to help save Christmas after it’s threatened by an elf gone bad. (Yesterday’s rank: n/a)

For fans of: Korean dramas, zombie apocalypses | Is it good?: Yes, especially if you love monster movies and shows

Adapted from Kim Carnby and Hwang Young-chan’s comic of the same name, Sweet Home centers on a teenage boy and the neighbors in his rundown apartment building, all of whom are forced to band together when humans begin turning into bloodthirsty monsters. (Yesterday’s rank: n/a)

For fans of: The story of the Ripper, but not that Ripper | Is it good?: It’s a must if you’re into true crime

If you already know everything about Jack the Ripper, brush up on a less famous creep. This four-part British true crime docuseries dives into the serial killer known as the Yorkshire Ripper, who murdered 13 women in northern England between 1975 and 1980. The killing spree eventually set off a massive manhunt that left the country on edge. Beyond the terrifying subject matter, what makes The Ripper so compelling is how well it explores the social and economic issues that put the Ripper’s victims — many of whom were sex workers — in his path. The cops don’t come off well either. It’s chilling stuff. (Yesterday’s rank: 9)