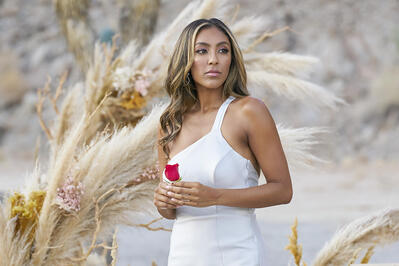 [Warning: The following contains spoilers for the Season 16 finale of The Bachelorette. Read at your own risk!]

We just got over the loss of our Turtleneck King when Brendan self-eliminated during Fantasy Suites (his speech about being broken and Tayshia deserving someone who is whole, well it broke me, okay?), and now we face this twist. Ivan and Zac are definitely not thrilled when Ben comes strolling into the rose ceremony. Haven’t these men been through enough? Do you guys remember that this was also the season in which Clare and Dale got engaged? That was not 10 years ago, it was mere weeks ago! At the very same La Quinta Resort and Club! And now they have to wait to see what Ben’s big return means. Well, Ivan’s wearing a mock turtleneck, so you know that’s not a great sign for him.

Tayshia doesn’t waste any time in asking Ivan for a private chat. No one ever comes back from a pre-rose ceremony private chat. She’s sending Ivan home. And now we know for sure: Tayshia hates turtlenecks. It seems as though during their Fantasy Suite, er, Airstream date, Tayshia and Ivan discussed religion and didn’t exactly align on the subject — we get no details, just vague sentences about how religion is so important to her and how he wished he brought it up sooner (we had to sit through like 20 minutes of Bennett summarizing that emotional intelligence book to us, but for this we’ll keep the details a secret, OK, sure) — and that’s a dealbreaker for Tayshia. She sends this sweet engineer — who, may I remind you, suffered through a date that took place in an ice bath — packing. And she doesn’t even cry as she puts him into his rejection-mobile. She was sobbing for Blake M, but Ivan gets nothing. Justice for this man! Ivan for Bachelor!

It was not to be. Tayshia is very clearly in love with Zac, and she has enough feelings for Ben that she wants to give him a second chance and see what’s there. It’s Zac and Ben who move forward and get to meet Tayshia’s family.

There’s not much drama during either of these family get-togethers. Both Ben and Zac are sincere and upfront about how much they love Tayshia, and both tell her parents that they want to marry her. Tayshia’s family, especially her dad, is understandably worried about watching her go through heartbreak again. At one point, Ben races all the Adams family members on scooters. You know, typical meet-the-parents type stuff.

Tayshia’s family thinks highly of both her final guys. Even so, her dad comes by for one last talk before she heads into her final dates. It is, um, unhelpful. He tells her he’s scared she’ll get hurt again and doesn’t want to see her “move backwards.” He tells her not to make “the biggest mistake of [her] life.” He drops that devastating thought and then pretty much just hugs his daughter and leaves. It’s all very unsettling. You can tell Tayshia is rattled by the conversation and is letting her fears get the best of her even when she meets up with Zac for their final date. Zac, who is 100% sure about marrying this woman, heads into the date wanting to make a lasting impression on Tayshia, knowing he is still vying for her heart against one last guy. “I can only control what I can control,” he says. And that’s just good advice for everyone.

Tayshia and Zac go to a dance class to learn some choreo for a “first dance,” and I gave up on these “dates” weeks ago so who even cares? Zac can tell something is bugging Tayshia and tries his best to cheer her up on the dance floor. It’s very sweet! No one is sweating too badly, so that’s also nice.

The meaty part of the date takes place later that night when Tayshia stops by Zac’s…La Quinta Home, I guess, for a casual hang. You know it’s casual because she wears a crop top. She opens up to him about her fears and reservations over getting married again. She’s scared that they’re falling for each other so hard and so fast that she doesn’t fully trust it. If she changes or he changes or their relationship changes, will Zac just run? She’s looking for loyalty. That hits Zac hard, who informs us that it’s his nine year sober anniversary and through his recovery he’s learned all about the importance of honesty, commitment, and loyalty. He doesn’t take those things lightly and he would never say he commits to Tayshia if he didn’t mean it. His sobriety is so important to him because it means he can’t just run, he has to “actually face life,” he tells her. He also assures her that changing and growing is a part of life and he’ll be there for her and he doesn’t love her for what her five year goals are. It all feels very sincere and authentic and what is happening right now? Who doesn’t want to marry this man at the moment? This show is so much better with older contestants. Zac and Tayshia say “I love you” over and over and they call each other by their first and last names and I’ve watched enough teen soaps to know that means you’re really in love.

Next, Tayshia wakes up on the morning of her final date with Ben — who knows the true order of these things, because Tayshia is wearing the same outfit she has on from when she had that talk with her dad — and she’s been thinking about what she really wants. It is not Ben. It is not Ben! Can you believe it? She brought him back just to kick him to the curb one last time! She goes to his hotel room ahead of their scheduled date. Her heart belongs to another, she says. Ben looks like he’s in the same state of shock as he was after Hometowns. He thought he “was going to be her husband,” he says to the camera, but in the end, he wants her to be happy. Ben had it bad for Tayshia and he got dumped twice. At least he put himself out there, right? I’m trying to find a silver lining!

It doesn’t matter anymore: There is only Tayshia and Zac. On one hand, Tayshia is still worried about getting married for a second time, on the other hand She! Loves! Zac! Clark! She arrives at the proposal location out in the desert. As far as I can tell, the remains of Clare’s burnt Juan Pablo gown are not still there, but I could be wrong. I hope I’m wrong! When she meets Chris Harrison she pretty much bursts into tears, but tells him it’s because she thinks maybe she’s never been in love until this moment and she’s excited. She does not look excited. She looks like she might run into the desert and never look back.

But then Zac arrives and tells Tayshia that he chooses her today and he’ll choose her every day and that she makes everyone around her better and he loves her. I mean, is this man writing romantic comedies yet? Because he should be. Tayshia tells Zac that she loves his kindness and sense of gratitude and his perseverance. Then she says “I told you that I love you, but…” and pauses for an insane amount of time. We did not come to this platform in the middle of the desert to play games! You humped in some paint the other day! You better love this man! She finally finishes the sentence with “…it’s more than that.” Of course it is, Tayshia! Zac proposes and Tayshia says yes and Zac chokes up talking about the gift she’s given his parents in allowing them to see him so happy, and honestly a grown man crying over making his parents happy is the kind of content we need in 2020.

A giddy — and happily engaged — Tayshia and Zac ride off into the desert in their cardboard NYC taxi from their Hometown date, and Tayshia reminds us all that we too could one day be sitting in bed, shoving donuts in our tear stained face and the next, off to meet our soulmate. Whether your dreams are the eating all the donuts part or the finding your soulmate part, they can come true. There’s no After the Final Rose to fill us in on Tayshia and Zac’s relationship status at the moment, and as always, Bachelor Nation odds are stacked against them, but these two seem very sincere and in love, and we’re rooting for them.

The Bachelorette is available on Hulu.