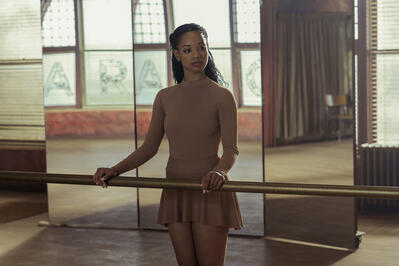 The Netflix Top 10 list won’t tell you how many people are watching a show, but it will tell you which shows people are watching the most. The Top 10 list for Thursday, Dec. 17 finds the Netflix holiday movie A California Christmas still at No. 1, while Manhunt: Deadly Games ranks at No. 2, and ballet drama Tiny Pretty Things holds strong in third position. The only new addition to the ranking is British true crime docuseries The Ripper, which debuts at No. 10.

‘Tis the season for lovably ridiculous rom-coms! A wealthy businessman poses as a ranch hand in the hopes of convincing a hardworking farmer to sell away her family’s property before Christmas. You can probably guess where this is going. (Yesterday’s rank: 1)

After the star student at an elite ballet academy suffers an accident, her replacement is thrown into a cutthroat world where almost all the students seem to be in vicious competition with each other. It’s pretty over the top in its soapiness. (Yesterday’s rank: 3)

Three very talented actors — Jessica Chastain, Colin Farrell, and John Malkovich — are all pretty under-utilized in this generic thriller about an assassin (Chastain) who is targeted by her own black ops after a hit goes wrong. (Yesterday’s rank: 4)

5. How the Grinch Stole Christmas

Jim Carrey’s 2000 adaptation of the Dr. Seuss book has become a holiday classic for plenty of people. If you’re a fan, you’ve probably already made a plan to revisit it for the holidays. (Yesterday’s rank: 7)

Adapted from the Virgin River novels by author Robyn Carr, the romantic drama stars Alexandra Breckenridge as Melinda “Mel” Monroe, a midwife and nurse practitioner from Los Angeles who moves to a beautiful but remote Northern California town following a series of traumatic heartbreaks. It all has a very Hallmark vibe to it, but in a good way! (Yesterday’s rank: 5)

Do you remember how awful puberty was? If you don’t, Big Mouth wants to make sure you can’t walk away from an episode without doing so. Now in its fourth season, the Netflix animated series tackles a host of new issues, including race, growing up as a young transgender person, and summer camp. (Yesterday’s rank: 6)

Budding superstar Anya Taylor-Joy (she’s been cast as young Furiosa in the next Mad Max movie) stars in this literary adaptation as Beth Harmon, a brilliant but troubled chess champion in 1950s Kentucky. She was an orphan who, in her youth, developed an incredible skill for the game but also a debilitating addiction to pills, which quiet her obsessive mind. It’s a detailed character study of brilliance and madness that’s usually reserved for male characters. It comes from one of Netflix’s go-to limited series producers, Godless‘ Scott Frank. (Yesterday’s rank: 9)

For fans of: The story of the Ripper, but not that Ripper | Is it good?: It’s great if you’re into true crime

If you already know everything about Jack the Ripper, brush up on a less famous creep. This four-part British true crime docuseries dives into the serial killer known as the Yorkshire Ripper, who murdered 13 women in northern England between 1975 and 1980. The killing spree eventually set off a massive manhunt that left the country on edge. Beyond the terrifying subject matter, what makes The Ripper so compelling is how well it explores the social and economic issues that put the Ripper’s victims — many of whom were sex workers — in his path. The cops don’t come off well either. It’s chilling stuff. (Yesterday’s rank: n/a)