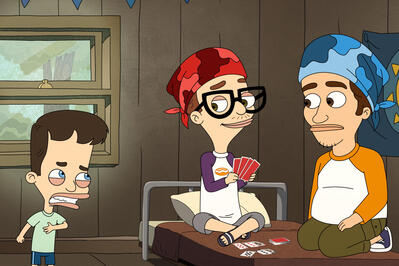 The Netflix Top 10 list won’t tell you how many people are watching a show, but it will tell you which shows people are watching the most. The Top 10 list for Tuesday, Dec. 15 finds the Netflix holiday movie A California Christmas swooping in to claim the top spot, while Manhunt: Deadly Games comes in at No. 2. The Jessica Chastain thriller Ava has been bumped down to No. 3, while Big Mouth Season 2 moves back into the top 5, coming in at No. 4 today.

‘Tis the season for lovably ridiculous rom-coms! A wealthy businessman poses as a ranch hand in the hopes of convincing a hardworking farmer to sell away her family’s property before Christmas. You can probably guess where this is going. (Yesterday’s rank: n/a)

Three very talented actors — Jessica Chastain, Colin Farrell, and John Malkovich — are all pretty under-utilized in this generic thriller about an assassin (Chastain) who is targeted by her own black ops after a hit goes wrong. (Yesterday’s rank: 1)

Do you remember how awful puberty was? If you don’t, Big Mouth wants to make sure you can’t walk away from an episode without doing so. Now in its fourth season, the Netflix animated series tackles a host of new issues, including race, growing up as a young transgender person, and summer camp. (Yesterday’s rank: 6)

Adapted from the Virgin River novels by author Robyn Carr, the romantic drama stars Alexandra Breckenridge as Melinda “Mel” Monroe, a midwife and nurse practitioner from Los Angeles who moves to a beautiful but remote Northern California town following a series of traumatic heartbreaks. It all has a very Hallmark vibe to it, but in a good way! (Yesterday’s rank: 5)

For fans of: Broadway musicals, proms | Is it good?: It’s big, flashy, and filled with celebrities, if that’s your kind of thing

Ryan Murphy does his Ryan Murphy thing — casts very famous actors and goes larger than large with the material — in this adaptation of the Broadway musical of the same name about washed up theater actors who shake up a small town when they advocate for a teen who wants to go to prom with her girlfriend. You know everyone in it, from Meryl Streep to Nicole Kidman to James Corden, and it’s pretty faithful to the original material. At the very least, it’s definitely going to make you miss live performances. (Yesterday’s rank: 2)

7. How the Grinch Stole Christmas

Jim Carrey’s 2000 adaptation of the Dr. Seuss book has become a holiday classic for plenty of people. If you’re a fan, you’ve probably already made a plan to revisit it for the holidays. (Yesterday’s rank: 4)

Budding superstar Anya Taylor-Joy (she’s been cast as young Furiosa in the next Mad Max movie) stars in this literary adaptation as Beth Harmon, a brilliant but troubled chess champion in 1950s Kentucky. She was an orphan who, in her youth, developed an incredible skill for the game but also a debilitating addiction to pills, which quiet her obsessive mind. It’s a detailed character study of brilliance and madness that’s usually reserved for male characters. It comes from one of Netflix’s go-to limited series producers, Godless‘ Scott Frank. (Yesterday’s rank: 8)

Selena Quintanilla, the iconic Queen of Tejano music who was tragically killed at 23, gets her origin story told in this Netflix series. Unfortunately, it really doesn’t give Selena (played by Christian Serratos) very much depth at all. Honestly, you’d probably just be better off watching the 1997 Jennifer Lopez film, Selena. (Yesterday’s rank: 7)