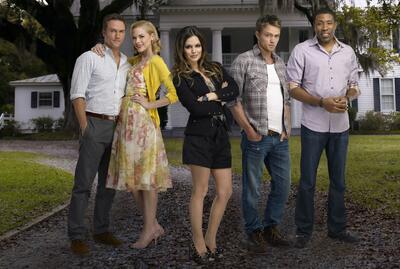 The sentimental and sometimes downright wacky CW series Hart of Dixie sadly left Netflix on Dec. 14 — most CW shows have a five-year streaming deal with Netflix, and Hart of Dixie‘s ended that day — leaving a Bluebell-sized hole in our hearts, at least when it comes to watching the show commercial free. Hart of Dixie started streaming on IMDB on Dec. 15, which means you can watch for free, but you will have to deal with ads.

The series starred Rachel Bilson as Zoe Hart, a New York City doctor who moved to the small Southern town of Bluebell, Alabama, to take over her father’s medical practice after he passed away. The fish-out-of-water story was fueled by strange local traditions, small-town drama, and a swoon-worthy love triangle involving the hunky town lawyer (Scott Porter) and the equally hunky bartender (Wilson Bethel). The show was just as likely to make you tear up as it was to make you laugh, so even if it sometimes felt like we were all experiencing a collective fever dream, there are fond memories all around.

If you’re looking for something like Hart of Dixie to watch, the list of shows below will all scratch that itch. You’ll find heartwarming shows featuring eccentric small towns, plenty of romance, and medical professionals who’ve relocated and started over. Who knew that was such a popular storyline? If you like Hart of Dixie, these are the shows you should watch next.

Eagle-eyed viewers will notice that the WB-turned-CW series Gilmore Girls and Hart of Dixie were both filmed on the Warner Bros. backlot in Burbank, California, but the same town square is not all the two shows have in common. Both are light-hearted dramedies set in charming small towns with annual festivals and strange traditions. So, if you’re looking for a show that will make you want to pack up and move to a new town that has long-standing feuds with neighboring towns, wacky townsfolk, and pets named after famous people, Gilmore Girls is the show for you.

Watch it on: Hulu, Freeform app

After you’ve finished Gilmore Girls, check out Bunheads, another heartwarming and quirky series created by Amy Sherman-Palladino that is set in a small town and also stars Kelly Bishop. The show follows Michelle (Tony Award winner Sutton Foster), a former ballerina turned Las Vegas showgirl who marries her admirer on a whim only to have him die shortly after she moves to his small coastal hometown. Like Zoe on Hart of Dixie, Michelle struggles to adjust to her new life in a strange place, but she eventually finds purpose when she begins teaching ballet to young teens alongside her new mother-in-law (Bishop). The series only ran for one season before being canceled, but it was a memorable one, especially if you enjoy dance.

Based on a series of books, Netflix’s Virgin River is more serious than Hart of Dixie ever was, but the two shows have a number of things in common, including a central character who is a medical professional, a hot bartender as a love interest, a small town setting, plenty of romance, and Tim Matheson playing a doctor. You couldn’t come up with a more similar show if you tried. The series stars Alexandra Breckenridge as Mel, a nurse practitioner who packs up her life in L.A. and moves to a remote but picturesque small town in Northern California to start over after a series of traumatic heartbreaks. Like Zoe, Mel also struggles to fit in at first — her new boss (Matheson) also doesn’t make it too easy. However, she forms a fast friendship with a hunky local bartender/restaurant owner (Martin Henderson), and it eventually turns romantic, opening up a new chapter for Mel, and a chance to move on.

Watch it on: Amazon Prime (to buy)

Playing House is for those fans who want to experience the comedy, hijinks, and heartfelt emotion that drove Hart of Dixie, but who also want to watch a TV show featuring strong female friendships that exist without catty drama. Playing House stars real life best friends Jessica St. Clair and Lennon Parham, who also created the show, as lifelong friends Emma and Maggie. When the latter leaves her husband while she’s pregnant with his child, Emma returns to their small hometown and moves in with Maggie to help her prepare for and then care for the baby. The series, which ran for three seasons on USA, effortlessly mixes the pair’s wildly funny escapades with heart-stopping romance, but never loses sight of the importance of the show’s central friendship, thus producing a rich and rewarding viewing experience.

Watch it on: CW Seed (with ads)

Before there was Hart of Dixie, there was Privileged, a lighthearted dramedy starring JoAnna Garcia Swisher (who was just JoAnna Garcia then) as Megan, a Yale-educated aspiring journalist who, after being fired from a tabloid, trades New York City for Palm Beach to become a private, live-in tutor for two teens played by Lucy Hale and Ashley Newbrough. If she could get the twins into Duke, their wealthy grandmother (Anne Archer) would pay off the rest of Megan’s student loans. The heartwarming series, which featured some good-looking eye candy as well, lasted just one season on The CW, though it might have just been ahead of its time. The show debuted shortly after 90210 and Gossip Girl and didn’t quite fit in with the audience The CW had at the time — it was sweeter and more good-natured than the other shows, capturing the warmth that was prevalent on The WB and would eventually make Hart of Dixie a success. In fact, Privileged creator Rina Mimoun would eventually go on to write for Hart of Dixie. It’s a shame the show didn’t get the chance to blossom, but that first season is still worth watching.

I am going to be honest here, the main reason I am suggesting fans of Hart of Dixie watch the critically acclaimed CW telenovela Jane the Virgin, about a young woman (Gina Rodriguez) who is accidentally artificially inseminated, is because one of the show’s lead characters, Petra Solano (Yael Grobglas), wears a lot of formal shorts throughout the show’s five seasons. And not once does anyone make fun of her for it! Petra and Zoe would be fast friends, I think. But the two shows also blend comedy and drama together well and both also feature love triangles that amassed passionate followings as well as leading ladies who start off as enemies but eventually become close friends. There’s a lot more to like than just formal shorts.

If the Southern charm and hospitality of Hart of Dixie is what you’re looking for, they also ooze from every corner of Netflix’s Sweet Magnolias, which is based on a series of books and swept many viewers off their feet earlier this year. The show stars Joanna Garcia Swisher as Maddie, a soon-to-be divorced mom of three attempting to pick up the pieces after her husband (Chris Klein) leaves her for a younger woman (Jamie Lynn Spears). As Maddie struggles to deal with the fallout of her husband’s public affair and the fact his new fiancée is pregnant, she’s also raising her kids and managing a new business with her best friends, Helen (Heather Headley) and Dana Sue (Brooke Elliott). Things finally start to look up when she begins dating her son’s sexy new baseball coach, a former Major Leaguer (Justin Bruening), leading to plenty of the romance that fans of Hart of Dixie love.

Watch it on: IMDb TV (with ads)

Like Hart of Dixie, Everwood is centered around a doctor who moves to a charming small town. But instead of needing experience as a general practitioner, renowned surgeon Andy Brown (Treat Williams) needs to figure out how to be a better father. Following the sudden death of his wife (Brenda Strong), Andy packs up his teenage son, Ephram (Gregory Smith), and pre-teen daughter, Delia (Vivien Cardone), and moves to Everwood, Colorado, in an attempt to rebuild his life and reconnect with his family. The heartfelt WB series, created by Greg Berlanti, is infused with small town charm, loads of family drama, and the ups and downs of love, both young and old.

Hart of Dixie derived a lot of drama from Zoe being a medical professional out of her comfort zone. While the medical storylines were sometimes the weakest aspect of the show, Starz’s romantic time travel series Outlander handles them much better, if that’s something you’re looking for. The show stars Caitriona Balfe as Claire Randall, a married former WWII nurse who travels back in time from 1945 to 1743 while on vacation with her husband (Tobias Menzies) and ends up falling in love with a rugged Highlander named Jamie Fraser (Sam Heughan). Claire uses her medical knowledge and training to help those in need in various ways throughout the show, and she does it in much more believable fashion. You won’t find Hart of Dixie‘s signature comedy here, but there’s plenty of romance to draw you in.

Watch it on: Netflix, CW Seed (with ads)

Like Bluebell, the town of Schitt’s Creek is a special place populated by some very out-there people, but you’ll come to love them and their quirks just like the characters at the heart of the show. The heartwarming comedy follows the formerly wealthy Rose family — Eugene Levy’s Johnny, Catherine O’Hara’s Moira, Dan Levy’s David, and Annie Murphy’s Alexis — who lost their fortune and are forced to relocate at the start of the show. Across six seasons, the characters evolve, find happiness, fall in love, begin new adventures, and otherwise come to understand that what matters in life is not what you own, but how you live that life and the people you choose to spend it with. It’ll make you laugh. It’ll make you cry. But most importantly, it’ll make you wonder why you didn’t watch it sooner.