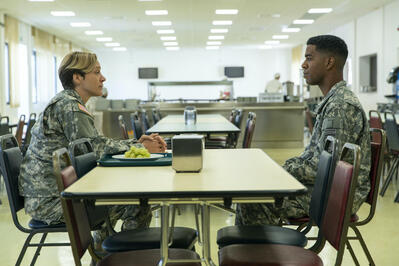 [Warning: The following contains spoilers for Monday’s episode of We Are Who We Are, “Right Here, Right Now VI.” Read at your own risk!]

I’ll admit that when I started watching We Are Who We Are I couldn’t figure out the significance of the series being set in 2016, at the height of Donald Trump’s presidential campaign against Hillary Clinton. As a fan of Luca Guadagnino, the Italian director behind films like 2017’s dreamy coming-of-age romance Call Me by Your Name and 2018’s witchy Suspiria remake, I wasn’t necessarily looking forward to the potential of Trump-related commentary from his first foray into television. Plenty of shows have already taken on the Trump era to varying degrees of success, and reliving his unexpected win, yet again, wasn’t exactly something I was excited about. But as of Monday night’s episode, titled “Right Here, Right Now VI,” setting the show in the recent past is starting to make sense.

Throughout the season so far, Trump has served as something of a specter in the world of We Are Who We Are, a ghost lurking in the background, looming over a group of characters who didn’t pay him much mind. The show’s 14-year-old protagonists, Fraser (Jack Dylan Grazer) and Caitlin (Jordan Kristine Seamón), are more concerned with the state of their own inner lives than they are with the president, and despite the show’s inherently political setting — a U.S. military base in Italy — Trump has only appeared in brief flashes. In one episode, a tense conversation between Sarah (Chloë Sevingy) and Richard (Kid Cudi) is underscored by the sound of Trump and Clinton’s first debate playing on TVs behind them. In another, Richard and Caitlin’s father-daughter screening of a baseball game is interrupted by a Trump ad in which he promises, if he’s elected, to enact a Muslim ban. Later in the same episode, Richard buys two Make America Great Again hats for himself and Caitlin, though hers notably won’t fit over her hair.

But in the show’s sixth episode, Trump’s presence takes on new meaning. “Right Here, Right Now VI” doesn’t fall into the same traps as a lot of media that bends over backwards to comment on his time in office, and that’s largely because it’s not really about him — until its Trump-focused ending blindsides you.

Kid Cudi and Jordan Kristine Seamón, We Are Who We ArePhoto: HBO

The episode is filled with moments of sincere, uninhibited joy — Fraser and Caitlin’s recreation of the music video for the show’s unofficial theme song, Blood Orange’s “Time Will Tell,” is easily one of my favorite TV scenes of the year — and moments of harrowing teenage confusion as Fraser goes on a day trip with his much older crush, Jonathan (Tom Mercier). There’s also indescribable sadness in this hour, as Richard realizes he’s losing Caitlin as she grows up. Unlike previous episodes, Trump is totally absent from the majority of “Right Here, Right Now VI.” He doesn’t appear until the final minutes, when Sarah is sitting in the dark, blankly watching the news in the hours after Trump became president-elect.

The broadcast is a bleak blast from the past, filled with shots of jubilant Trump supporters, a Kellyanne Conway interview, and one man who declares he came to Trump Tower to “witness history.” Sarah changes the channel, but she can’t escape it: On NBC, Lester Holt’s voiceover calls the victory “improbable and incredible.” As Holt begins to discuss Clinton conceding the election, the scene is disrupted when Sarah gets a phone call from an unlisted number. We don’t know who she’s speaking to, and she doesn’t say much, but the distress on her face is evident. When she rushes out of the house, she gives no indication where she’s going. It feels appropriately foreboding, though instead of following her, the camera lingers on the TV as the credits begin to roll.

Guadagnino, who directed and co-wrote each episode, was obviously careful about choosing which parts of the election night broadcast made it into the series. As the camera watches Clinton’s concession speech, the show zeroes in on her urging young people to “never stop believing that fighting for what’s right is worth it.” When trying to crack open what went wrong, commentators speak about Clinton’s failure to gain the enthusiasm of Black and millennial voters the way Barack Obama had. As the episode dissolves into the HBO logo, the last thing we hear is a reporter saying, “For Trump, the hard part is just beginning.” This is all intentional.

It’s easy to look back years later at events of the past and air out informed opinions on those events. (This was actually a crucial element of another HBO show, The Newsroom!) But that’s not the tactic Guadagnino seems to be taking with “Right Here, Right Now VI.” The episode isn’t admonishing the audience or telling viewers, from an outsider’s perspective, what could have been done better. Instead, the ending functions as something of a cautionary tale for the future, and it seems like no accident that it’s airing 15 days before the 2020 election. This is Guadagnino’s reminder of how the shock of Trump’s electoral victory has had an enormous impact on the world young people have grown up in, while also reaffirming his belief in the power of the next generation. “We are dealing with a kind of populism that springs from the plutocrats,” the filmmaker told Variety back in July. “It is shaping the world while at the same time a phalanx of youth is shaking the world as well and not taking that bitter medicine.”

We Are Who We Are is about the many, sometimes simultaneous, highs and lows of growing up. The show’s teenage characters feel trapped and displaced in an America that’s so far from the America on the map, and they are trying to establish their identities and form their own opinions while stuck in a restrictive environment. Guadagnino treats those years of self-discovery with empathy and compassion, portraying it as a crucial period in a person’s life that can go on to have an impact on not just their own future, but the futures of countless others, too.

Of course, an episode of an artsy HBO drama isn’t going to change the outcome of an entire election. But by shining a spotlight on the concerns of young people, the show sends a powerful message during an election cycle that has seemed more focused on catering to older and more moderate voters. In this period of uncertainty, I’m reflecting on We Are Who We Are‘s use of a clip urging young people to be politically active, and how the show is at once speaking to that younger demographic and warning the older generation not to rule them out.