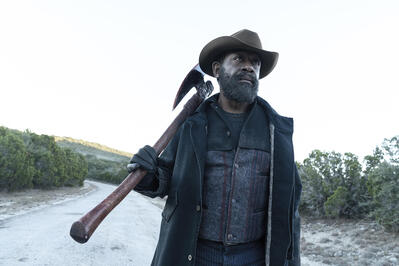 A few weeks before the pandemic hit, TV Guide visited the Texas set of AMC’s horror drama Fear the Walking Dead, where cast and crew were hard at work on the second episode of Season 6, “Welcome to the Club,” which ultimately aired Sunday night. The special thing about the episode is that was the directorial debut of Lennie James, who stars on the show as Morgan Jones, though he only appeared briefly in this episode. And it was his overall directorial debut, not just on Fear the Walking Dead. Now that the episode has aired, we can see that James did a bang-up job, but while it was in production, he had no idea how it was going.

“It’s all such a massive learning curve,” James said. “The amazing thing about it is for as long as I’ve been doing what I’ve been doing, I haven’t had many days where I’m doing stuff that I’ve never done before. And every single day since I was in prep and directing has been a day where I’m not knowing how the day’s gonna go. I’ve had no expectation of it, and every day’s been new.”

Asked how his co-stars — this episode focused on Colman Domingo as Victor Strand, Alycia Debnam-Carey as Alicia Clark, and Ruben Blades as Daniel Salazar — were responding to him giving direction, he joked “I think I’m going to pay for it further down the line.” (Domingo directed Episode 3 of the season). Seriously, though, Domingo said that the whole cast and crew was generous and supportive, which he appreciated. “This crew is amazing,” he said. “I said to someone earlier, I’m not sure the acting department would be so generous if one of the lighting guys went ‘I’m going to be an actor.’ I’m not sure we’d be as generous and as open and as helpful as this crew has been.”

The Walking Dead: World Beyond Is Perfectly Cast, and Other Things We Learned from Visiting the Set

James had been talking on and off with the producers for a while about directing, but he hadn’t been feeling up to the challenge until now. He didn’t know what changed, but something did, so he went for it. “For whatever reason, at the beginning of this season I phoned up the boys [executive producers Ian Goldberg and Andrew Chambliss] and said ‘I might take you up on that offer.'”

After he took the job, he sought out advice from Domingo, who has directed three episodes of the show so far, and Michael E. Satrazemis, Fear the Walking Dead‘s primary director. He went out for coffee with each of them — Domingo rode to his meeting on one of the rental scooters that are all over Austin — and asked them every question he could think of. “They’ve been incredible mentors,” James said.

Domingo said that he was very excited that James was finally directing, because James was nervous to do it. “I sat down with him and talked to him and gave him some hints of what I’ve learned. But I think because, again, and I told him to lean into the fact that this is your show and that people are very supportive and we all want you to win. And so, you know what you know, and what you don’t know, that’s okay too. That we’re here to help you out. And so I think he’s leaned into that as well. And he’s a master actor and a great communicator. And I think those are… Especially being a great communicator, is a great skill to have. And I think he understands actors. So I think, actors always love when other actors direct them. So I think he’s great. I think he’s going to lean into this in such a great way that we’ll be seeing him do more of this.”

Fear the Walking Dead airs Sundays at 9/8c on AMC.