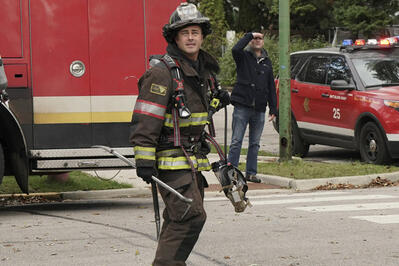 Chicago Fire has halted filming after multiple members of the production team tested positive for COVID-19, Deadline reports. The drama, which is currently shooting its ninth season, reportedly shut down production on Nov. 8 and will remain paused for two weeks.

The individuals who tested positive reportedly perform duties that require them to be in close proximity to other cast and crew members, meaning that NBC has taken the extra precaution of shutting the show down.

This news comes over a month after another One Chicago series, Chicago Med, was forced to suspend production after a crew member tested positive for COVID-19. In recent weeks, the U.S. has seen a major spike in COVID-19 cases all over the country.

Chicago Fire Season 9: Everything We Know

Chicago Fire‘s Miranda Rae Mayo has previously opened up about how filming on Dick Wolf’s Chicago-based procedurals has changed in the age of coronavirus. “It’s a big shift in the way that we have operated on set, but I welcome the challenge to be a more mindful community member,” she told Us Weekly. “We’re getting tested every day. So, even if we’re not scheduled to work, we’ve gotta go in and get tested. We’ve gotta think about the whole and how it’s beneficial to everyone in keeping everybody safe.”