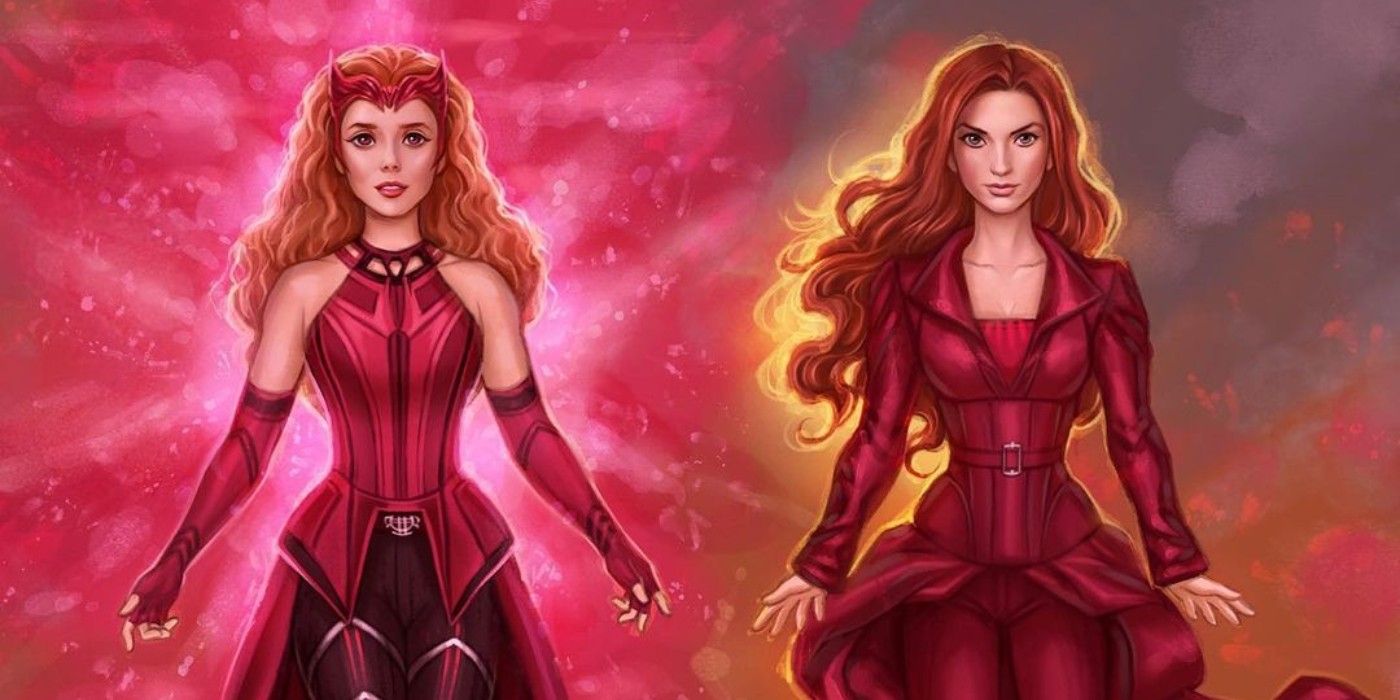 WandaVision fan art perfectly unites Scarlet Witch with X-Men‘s Dark Phoenix, making for an awesome visual. Though The Falcon and the Winter Soldier is currently dominating the streaming conversation, WandaVision was the one to usher in a new era for the Marvel Cinematic Universe. The series, which starred Elizabeth Olsen and Paul Bettany in the title roles, ran from January to the very start of March. In telling a sitcom-inspired story centered on the unlikely couple, WandaVision earned praise for its faithful television recreations and Scarlet Witch’s arc, which finally explored her deep-seated grief.

Undoubtedly, Olsen’s Wanda Maximoff is among the characters who has suffered the most in the MCU, and WandaVision put a spotlight on that. The sitcom world she and Vision first inhabited was born from her immense grief over losing all her loved ones, and a trip back through her past in WandaVision episode 8 delved into how all those losses shaped her. In the end, Wanda made the final transition into her Scarlet Witch persona, which might have lasting consequences for the MCU.

Back when fans were speculating about WandaVision‘s true villain, many wondered if Scarlet Witch would go full bad guy in her attempt to rewrite reality. That’s not quite what happened, but the concept stuck. A new piece of fan art from Daniel Kordek pairs Wanda with X-Men‘s Jean Grey, another gifted being who, in the famous Dark Phoenix storyline, goes bad when she is exposed to solar radiation and becomes even more powerful. Fans wondered if Wanda would go the Dark Phoenix route in WandaVision, and after looking at this art, one rather wishes she had. Check it out down below.

According to WandaVision big bad Agatha Harkness (Kathryn Hahn), the Scarlet Witch is a mythical being with the power to destroy the world and, by accepting her role as the Scarlet Witch, Wanda has unleashed something unthinkable. Exactly what that is remains to be seen, but a Dark Phoenix-esque storyline could be on the way for her. After all, Wanda was last seen poring over the Darkhold, aka the book of the damned. Her forthcoming role in Doctor Strange in the Multiverse of Madness could put her in a far darker position than before.

WandaVision was the best showcase Scarlet Witch has received so far in the MCU, and hopefully Doctor Strange 2 will continue her storyline in a satisfying way. Her transformation into the Scarlet Witch could resemble Jean Grey’s turn into the Dark Phoenix, or it could go in a completely different direction. Either way, audiences can’t wait to see what will come next for her.