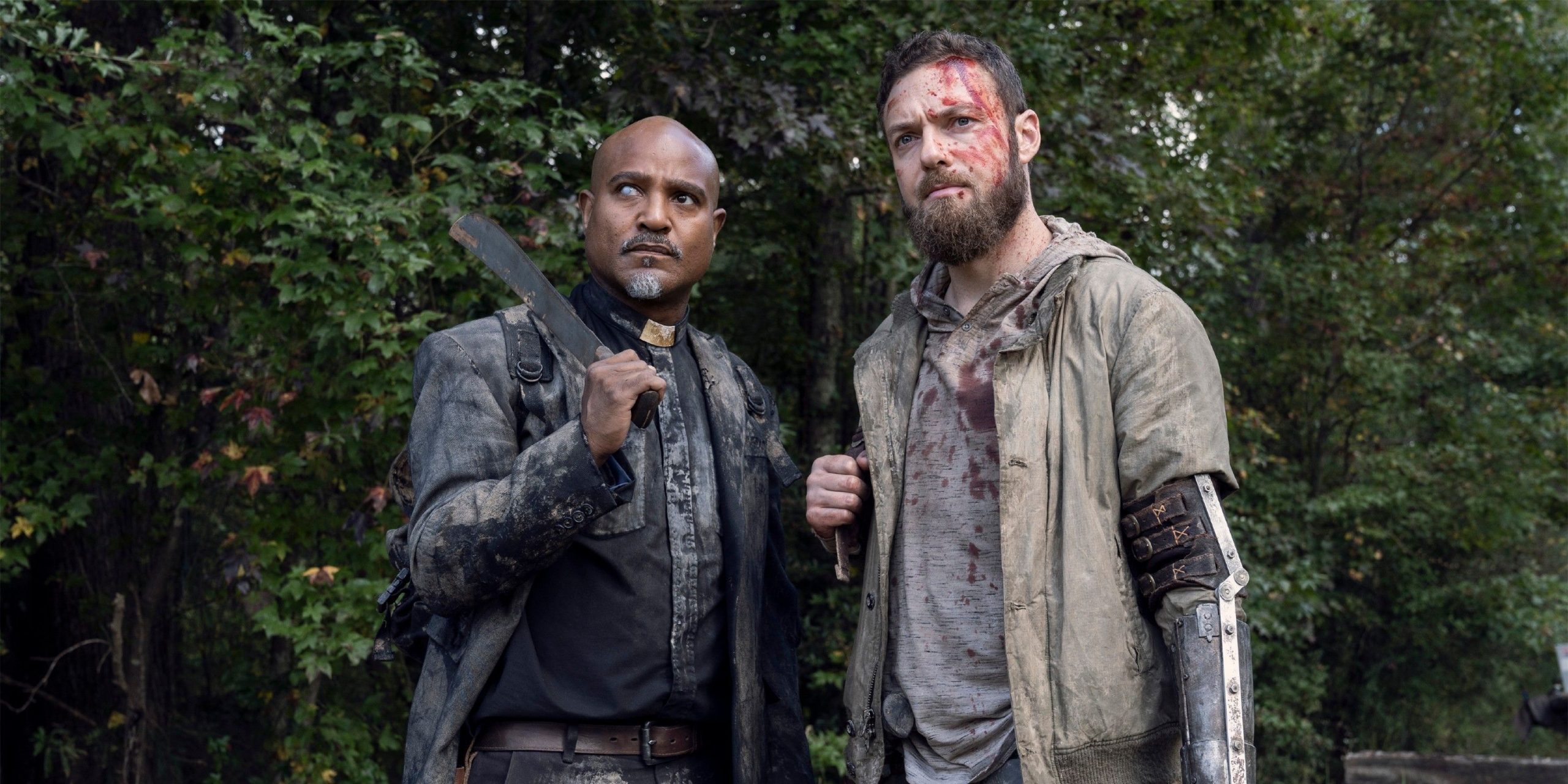 The opening minutes of The Walking Dead season 10, episode 19, “One More,” show Gabriel (Seth Gilliam) and Aaron (Ross Marquand) making use of Maggie’s map to look for food and supplies to bring back to Alexandria. “One More” is part of six bonus episodes that were tacked onto the end of season 10, which was originally scheduled to end with episode 16. As with many other shows, the pandemic severely disrupted The Walking Dead‘s filming schedule. AMC initially planned The Walking Dead season 11, which will be the show’s last, to begin airing in October 2020. Then, the pandemic hit, and production was delayed. To help tide fans over and bridge the gap between seasons, six extra episodes, which focus on smaller, more personal stories, were added to season 10.

The Walking Dead season 10 centers largely on the growing tension with the Whisperers. Though the survivors try to make peace, it becomes clear that a war is coming. It culminates with the leaders of the Whisperers, Alpha and Beta, dead, their walker horde demolished. Episode 16 also brought the return of fan-favorite Maggie, who had been absent from the show for much of seasons 9 and 10. The first of the bonus episodes focuses on Maggie, showing her tense reunion with Negan and catching up with the other survivors. The second bonus episode is mostly told in flashbacks, giving viewers a chance to see how Daryl got his dog. Now, the third, which airs on Sunday, March 14, will focus on Gabriel and Aaron.

In this Screen Rant exclusive clip, Gabriel and Aaron are out looking for supplies with the aid of a map given to them by Maggie. It seems to have been a fruitless journey so far, though, as they’re exasperated when another possible supply cache has been destroyed by fire. Gabriel pulls a neat trick with an egg timer to draw out walkers hidden in an overgrown field, but it’s Aaron’s discovery that sets the tone for the episode.

Behind the burned-out structure, Aaron finds three charred skeletons huddled together. It seems to be two adults with a child between them, flowers growing haphazardly over the bones. “What happened here?” Aaron asks. “We’ll never know,” Gabriel responds. It’s a powerful moment, reminding the audience of the human cost in the larger battle with the constant onslaught of walkers.

The episode’s description reads, in part, “Small tragedies lead to bigger tragedies as faith is broken and optimism is fragmented when they are put to the ultimate test.” It’s pretty safe to say that Aaron’s discovery is the first sad moment in the episode – and if a dead family is a small tragedy, The Walking Dead season 10, episode 19, is clearly building up to a devastating final reveal.