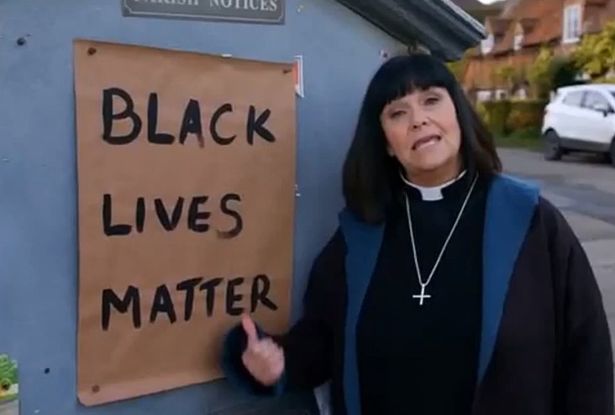 Vicar of Dibley was back last night, airing a Black Lives Matter tribute that viewers have praised as “lovely”, “heartwarming” and “beautiful.”

And despite show’s comedic roots, Dawn – as Geraldine – took a moment to share a serious message.

Taking a knee, Geraldine explained the importance of the Black Lives Matter movement in a move that viewers loved.

The BBC has already been forced to defend the segment after the news broke that it would be making it into the final script.

“Listen, I’m aware that all lives matter, obviously. But until all lives matter the same, we’re doing something very wrong. So I think we need to focus on justice for a huge chunk of our country men and women who seem to have a very bad, weird deal, from the day they’re born.”

Geraldine walked over to the parish board, removing old posters and replacing them with one reading “BLACK LIVES MATTER” in bold text.

“I think that in Dibley, perhaps we should be thinking about taking down some of our old notices, like this, and perhaps, we put up one like this instead,” the beloved character concluded.

*The Vicar Of Dibley In Lockdown continues Monday at 8.20pm on BBC One.