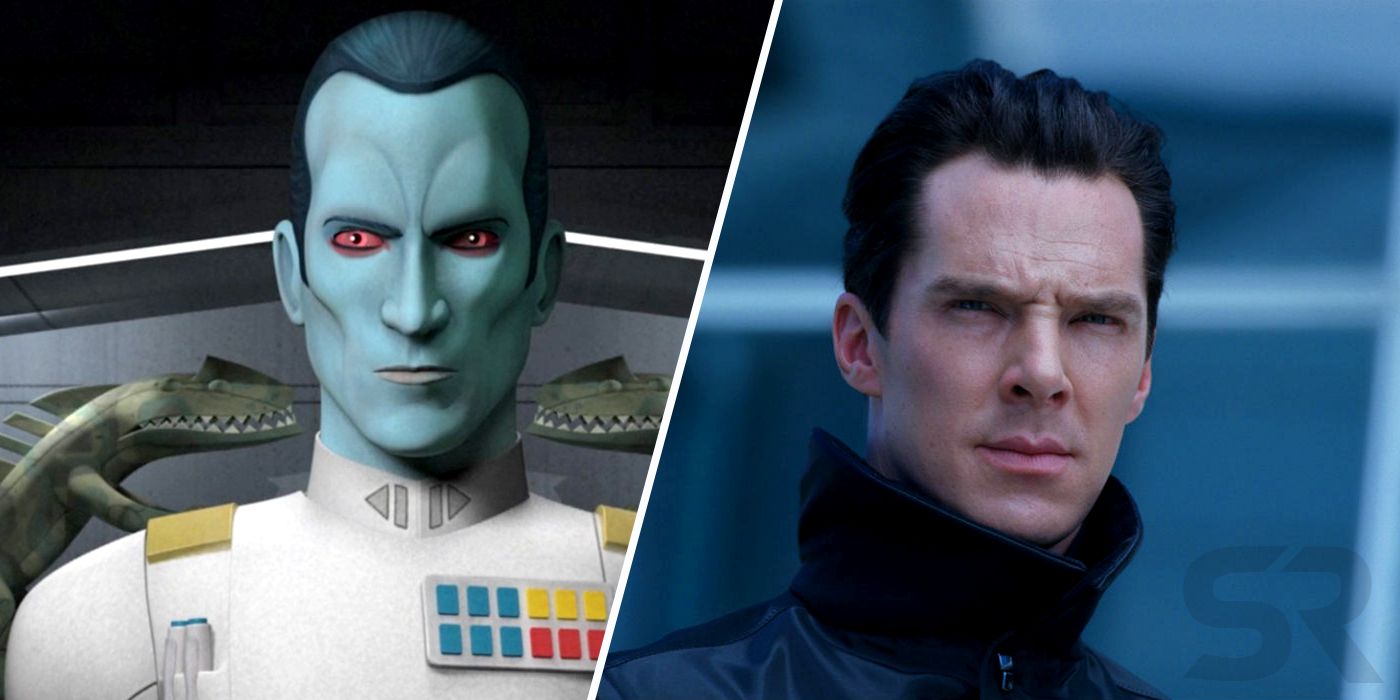 Benedict Cumberbatch has won a recent fan vote for who should play Grand Admiral Thrawn in The Mandalorian and other live-action Star Wars shows. Thrawn was a major player and fan-favorite character in the Star Wars Legends timeline, and he was reintroduced to the canon through Star Wars: Rebels. Though he’s yet to debut in proper live-action, references to the Chiss strategist in The Mandalorian season 2 suggest he will soon.

Originally introduced in Timothy Zahn’s acclaimed Heir to the Empire book series, Thrawn quickly became a central piece of the Star Wars Extended Universe through the 1990s and early 2000s. His role as a cold, calculated, villainous leader created a compelling new villain outside the story of the films. When his stories were deemed no long canon after the Disney acquisition, fans called for Thrawn to be brought back, and eventually, he made his return in Star Wars: Rebels. In The Mandalorian season 2, Ahsoka Tano is searching the galaxy for Thrawn – a search that is likely to continue into her recently-announced spinoff show.

With overwhelming evidence of Thrawn’s impending live-action arrival, fans have been buzzing with theories of who could play the Grand Admiral. And in a new poll conducted by Fandom, a clear favorite has emerged – Sherlock and Avengers: Endgame star Benedict Cumberbatch. Michael Fassbender finished second in the fan voting, and Lars Mikkelsen, who voiced Thrawn in Star Wars: Rebels, finished third. While one bout of voting surely isn’t fully comprehensive of the fan base, it does give some interesting insight into who could be a good fit for the role.

Could Cumberbatch be the one to lead Thrawn into live-action? It’s possible, but it also could be a longshot. The Mandalorian’s budget is substantial to be sure, and that budget looks to only be expanding for its coming spinoffs, but Cumberbatch still feels like a bit too big of a name for Disney+. Up until now, The Mandalorian has primarily built its cast around seasoned veterans like Nick Nolte and Carl Weathers, and contemporary TV stars like Pedro Pascal, Rosario Dawson, and Giancarlo Esposito. Those are all stars with great talent and substantial cultural presence, but not on the scale of blockbuster movie stars like Cumberbatch and Fassbender.

Since The Mandalorian has already brought back one former voice actor into the realm of live-action with Katee Sackhoff’s Bo-Katan Kryze, Lars Mikkelsen might be a more likely choice to play Thrawn. Fans are already familiar with and supportive of his take on the character, and he’d only have more room to build Thrawn on a show like Ahsoka. Until official casting news comes out though, nothing is off the table. Whoever takes up the mantle of Thrawn, it should be exciting to see him make his debut in the world of The Mandalorian.