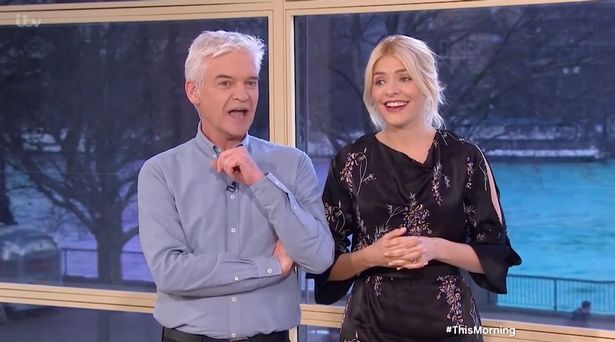 This Morning producers are reportedly going to ensure that the more risqué element from the daytime show is removed – at least for the next few weeks.

Hosts Holly Willoughby and Phillip Schofield have been known to have a giggle at lewd suggestions and innuendos while presenting the show but this will be turned off while children are being homeschooled and could be listening in.

There will also be a cull of ‘saucy segments’ in the show, when Holly and Phil get to grips with stories and features that might have a more sexual nature to them.

In the past, they have discussed sex positions for the over-60s and life-size sex dolls.

The source continued to say that “important subjects” were not going to be ignored but “explicit” items will be off the menu.

Having said that, show bosses recognise that being a live show, there may be times when Holly and Phil are “in fits” if a “slip of the tongue or a saucy innuendo” happens.

It could be a while for the daytime hosts to keep themselves in check as it is expected that schools will be closed for more pupils until the end of February as the spread of coronavirus is brought under control.