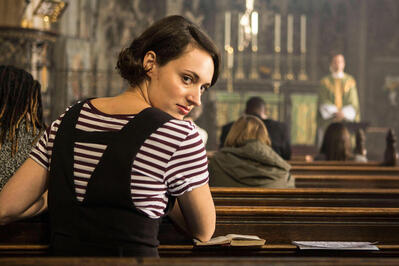 Despite the fact that Fleabag, Phoebe Waller-Bridge’s opus, ended after two seasons in 2019, I still find myself thinking about (and revisiting) it pretty frequently. If you’re anything like me, you’ve found it hard to fill the void left behind by a beautiful show that had everything from hot priests to penis walls to a deliciously rude Olivia Colman.

While you could always deal with it by invoking the aforementioned Priest (Andrew Scott) and trying to convince yourself “it’ll pass,” you could also just take a look at some of TV Guide’s recommendations for the best shows that might remind you of Fleabag, from another of Waller-Bridge’s television ventures to tragicomedies starring complicated protagonists to more shows featuring unique romances.

This one’s a gimme, but the first thing you should do if you’re looking for more of Waller-Bridge’s singular voice is check out Crashing. Predating Fleabag, the six-episode series centers around the relationships and romantic entanglements of a group of twenty-somethings living together in an abandoned hospital. In addition to creating the series and writing every episode, Waller-Bridge also plays Lulu, the flighty childhood friend of another resident who disrupts everything with her arrival, and Bridgerton‘s Jonathan Bailey co-starring as the sex-obsessed Sam, who begins to explore the complexities of his sexuality as the episodes progress. It’s definitely less polished than Waller-Bridge’s later work, but it’s a fun, easy watch where you can clearly see glimmers of what would make Fleabag so special.

Stephen Falk’s FX series follows the triumphantly messy evolution of the relationship between Gretchen (Aya Cash) and Jimmy (Chris Geere), two generally unhappy, distrustful people who find themselves falling in love despite their reservations, emotional constipation, and separate personal demons. There are so many things to love about You’re the Worst: It’s exceptionally funny and clever, it takes on the realities of clinical depression thoughtfully and carefully, and its supporting characters, Kether Donohue’s Lindsay and Desmin Borges’ Edgar, are written just as lovingly as Gretchen and Jimmy, but the thing most likely to hook any Fleabag fan is Gretchen herself. Much like Fleabag, Gretchen is bitingly sarcastic and makes almost infuriatingly bad decisions, attracting trouble like it’s her job, but Cash’s committed, empathetic performance is reminiscent of Waller-Bridge’s in that even in her lowest moments, it’s hard not to root for her, or at least see yourself in her. Her recklessness is part of what makes her lovable, and her arc over the course of the show’s five seasons is stunningly human. There’s probably an alternate version of this universe where You’re the Worst and Fleabag did a ’90s-style crossover episode that saw Fleabag and Gretchen realizing they were long lost cousins and subsequently causing a lot of problems together. That’s the utopia I choose to transport myself to in lieu of meditation, anyway.

Where to watch: Amazon

The love story between Fleabag and the Hot Priest(™) will undoubtedly go down in TV history as one of the most affecting and memorable of all time, and if it’s more of that you’re looking for, Catastrophe should be your next watch. Co-creators and co-writers Rob Delaney and Sharon Horgan star, respectively, as the affable Rob and the sardonic, disillusioned Sharon, two single people who find themselves falling into a relationship after a short fling leaves Sharon pregnant. Reminiscent of Fleabag‘s second season, which found Fleabag and the priest tentatively, fleetingly exploring their remarkable connection, Catastrophe is the kind of show that celebrates the joys and frustrations of unexpected romance. Catastrophe tells us that love isn’t easy, but it’s worth having if you can find it. If all that wasn’t enough, the late, great Carrie Fisher is the show’s answer to Olivia Colman’s godmother character, making recurring appearances as Rob’s eccentric, judgmental mother.

I May Destroy You

If much of Fleabag is about the rocky path that comes along with healing after trauma, I May Destroy You took that concept and ran away with it. Michaela Coel’s dark and deeply personal masterpiece mines from her real life experience to tell a story about the aftermath of sexual assault. Similar to Fleabag, Coel’s protagonist Arabella is strong-willed but totally lost in the world. Episodes see her experiencing the full, difficult spectrum of emotions and reactions as she flails to stay afloat while struggling to piece the night of her rape back together. In some episodes, she presents herself as hardened and wise; in others, she completely breaks down. After just one episode of I May Destroy You, it becomes immediately clear that Waller-Bridge and Coel have very similar creative styles. They both flourish in the cerebral, and they share a talent for writing (as well as portraying) difficult women, and presenting them to the audience, warts and all.

Billie Piper pulls double duty as co-creator and star of I Hate Suzie, a brutally funny series that follows the unravelling of Piper’s Suzie Pickles, an actress whose personal and professional life spirals out of her control after her phone is hacked and compromising photos are leaked for the world to gaze upon. The show is so reminiscent of Fleabag in how it doesn’t shy away from its protagonist’s darker qualities, and the desperation she often feels as she struggles to gain back some semblance of normalcy while dealing with such an astounding invasion of privacy. It’s not always an easy watch, though I’m willing to bet that if you like Fleabag, you’re not someone who shies away from the more cringeworthy aspects of life.

Not many shows can pull off breaking the fourth wall as expertly as Fleabag managed to, but High Fidelity is one of them. A televised adaptation of the 2000 film of the same name, Zoë Kravitz steps into the role of disaffected record store owner Rob, previously played by John Cusack, and it’s not long into the first episode before she’s looking right into the camera to begin telling us about her Top Five greatest heartbreaks of all time. She slowly begins to spin out as the show progresses, her carefully constructed walls beginning to crack, and in the spirit of Fleabag, she invites the audience in to share in her pain (and, sometimes, the comedy born out of her pain) by addressing us directly.

If you finished Fleabag and thought, “That is good, but I’d like even more sex,” look no further than Mrs. Fletcher. Based on the Tom Perrotta novel of the same name, Kathryn Hahn stars as the titular Mrs. Fletcher, a divorced woman who tries to get her groove back, so to speak, when her son goes off to college. Part of what made Fleabag so alluring to so many people was the way it portrayed desire in all of its many forms: desire for love, desire for self-actualization, desire for a good relationship with your sister, and that’s ultimately what Mrs. Fletcher is all about. It’s about the ways humans want things, and how that want can come to change the course of your entire life.

Donald Glover once said that, after spending an entire night bingeing Fleabag, he walked into work on his FX series Atlanta the next day and instructed his entire writing staff to do the same. It makes sense: Atlanta is just as original as Fleabag, if not weirder and more experimental, and these two shows share all kinds of DNA. On Atlanta, Glover stars as Earn, an aimless, cynical college dropout turned music manager working overtime to get his cousin’s (Brian Tyree Henry) rap career off the ground. Earn hustles constantly, and often fruitlessly, rising up briefly only to be kicked right back down to where he started. Like Fleabag, Atlanta is about trying to find a place for yourself in a cruel, unforgiving world; unlike Fleabag, there’s an episode set at a Juneteenth party.

Does anything sound worse than being stuck in a time loop, forced to experience the same day over and over again? I sincerely don’t think so. That very Groundhog Day effect is the premise of Russian Doll, which was co-created by and stars Natasha Lyonne as Nadia, a woman doomed to repeat the day of her 36th birthday party over and over, dying at the end of the night only to wake up the next morning, completely unharmed. Lyonne and Waller-Bridge’s anti-heroines share an acerbic wit, and though the worlds they’re in are very different, Fleabag fans will instantly see hints of Fleabag in Nadia as she struggles to figure out why the universe has seemingly turned against her.