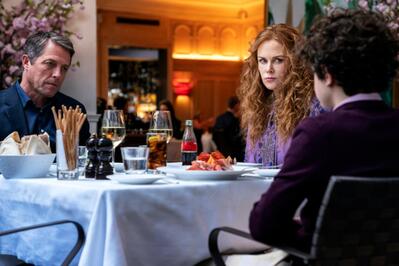 [Warning: The following contains spoilers for the latest episode of The Undoing, “Trial By Fury.” Read at your own risk!]

In its penultimate episode, HBO’s The Undoing just shook up everything we thought we knew about the murder of Elena Alves (Matilda de Angelis). Again.

Not only did the episode reveal that Henry (Noah Jupe) had previously seen Jonathan (Hugh Grant) and Elena together before and helped hide the affair from Grace (Nicole Kidman), but it looks like he might have even stashed away the murder weapon in his violin case. Now that her son has also kept these gutting secrets from her, Grace is officially three for three on the men in her life being long-time liars.

The episode, titled “Trial By Fury,” centered on Jonathan’s trial for Elena’s murder, with his pricey defense attorney Haley Fitzgerald (Noma Dumezweni) doing exactly what she said she would do by poking holes in the state’s case by way of her stinging cross-examinations. Haley is convincing enough that Detective Joe Mendoza (Edgar Ramirez) didn’t sufficiently rule out other suspects, including Grace, who appeared on the security footage outside of Elena’s studio the night of the murder, and Elena’s husband Fernando (Ismael Cruz Cordova), who knew about the affair and the fact that Elena’s baby’s father is Jonathan, not him.

However, the prosecution had some effective arguments to make to the jury as well, including showing a brutally gory shot of the murder scene and staging a chilling reenactment of just how many times Elena’s head must’ve been smashed with her own sculpting hammer. Grace’s best friend Sylvia (Lily Rabe) remains convinced that Jonathan is guilty, and Grace might, too, after hearing what Jonathan’s mother has to say about him.

Grace contacts her estranged mother-in-law to follow up on Jonathan’s new story about carrying guilt for the accidental death of his little sister Katie, who ran into the road when he was supposed to be watching her when they were children. The way he tells it, this incident has been his secret shame for decades and is why he went into pediatric oncology to save kids’ lives; his mother’s version of the story is much grimmer, though, casting him as a downright sociopath who wasn’t bothered by little Katie’s death for a single second of his childhood.

Heading into the finale, then, there are a series of mysteries to be solved: Why does Henry have that hammer hidden away? Who did Jonathan mean when he said on his TV interview he knew who killed Elena? Is he an actual sociopath? Did Jonathan kill Elena, and will justice be served?

TV Guide spoke with director Susanne Bier about where we are at after Episode 5, and what’s ahead on The Undoing finale.

In this episode, Grace has just been shocked by all three men in her life. Her husband, father, and son all kept enormous secrets from her. What does it say about her that even though her profession is to see through people’s presentations of self that they were all able to lie to her, and conceal this information about themselves?
Susanne Bier: I think that’s often the case. When I went to school there were a lot of kids that their parents were therapists and most [of those] kids were the most messed-up kids. I think oftentimes it’s like; I think you know you can be a great therapist and not necessarily be able to quite comprehend what’s going on in your own life. And it doesn’t mean that you’re shallow or silly. It’s in the nature of the distance that a real analysis takes. And I think it’s very real and truthful.

Can you talk about the dilemma that Grace is facing now? It’s hard to believe that she still thinks Jonathan is innocent after learning what she has from his mother, but she does still want to protect her family.
Bier: I mean she’s facing a number of dilemmas. I think her biggest dilemma is making up her own mind because she’s been torn between her love for him or her increasing insecurity about his truthfulness, her confusion about her father, and her confusion about her son. So I think her biggest challenge is figuring out who she is, what she wants, and where she’s going to go with whatever she knows.

Do you think the police are right, that she knows something that we have yet to discover?
Bier: It’s very interesting because when you talk about the police and you talk about Edgar Ramirez’s part, you touch into the haves and have-nots [dynamic]. And I think what he represents is an incredible detective who is fed up with … the advantage of being white and privileged. And I think he has a strong sense that she’s hiding something. It doesn’t necessarily have to be a lie, but she’s not being collaborative, and we’re dealing with a really horrible crime. He’s obviously frustrated by it. So, you know, she might not be lying, but she’s not necessarily delivering old pictures.

Can you give us a teaser of what we’re about to find out about the weapon?
Bier: Well, nothing is exactly what it seems.