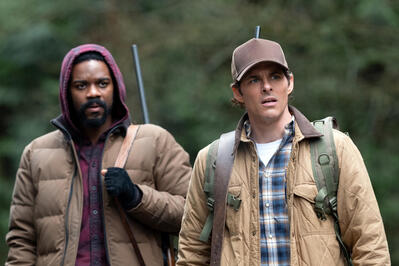 When The Stand arrived in bookstores in 1978, few reviewers hailed it as a modern classic. A widely circulated Associated Press review predicted it might “merely make some readers sleep,” rather than prompt them to sleep with the lights on. UPI was kinder, but condescending, saying it “ain’t art — but it’s fun.” One of the few unabashedly glowing notices came from Jim Ridley in the Murfeesboro, Tenn. Morning Press who called it a “new American classic.” Later an acclaimed film critic and editor for the Nashville Scene, Ridley was all of 12 when he wrote the review, but it’s safe to say popular opinion has swung his way in the 40+ years since The Stand‘s publication. It may not be every King fan’s favorite book, but it’s clearly one of the author’s landmark novels, marking a point when his ambitions started to stretch beyond scary stories and into the realm of myth.

That ambition has also made it tough to adapt. The Stand begins as a story following a couple dozen characters after a global pandemic wipes out much of the human population. It ends as nothing less than a battle between good and evil that plays out in the American Southwest. Mick Garris directed a solid four-part miniseries that aired in 1994, but periodic talk of a feature film version still flared up over the years and this new, nine-part miniseries can be directly traced to a failed attempt to make a Stand movie in the early ’10s, an attempt that evolved into four movies then a miniseries followed by a movie before sputtering out.

A new miniseries might have been inevitable. It’s tough to squeeze a story of this scale into a shorter running time and we’re in the midst of a season of book-to-miniseries adaptations, so why not The Stand? Developed by Josh Boone (The Fault in Our Stars, New Mutants) and Benjamin Cavell with a writing staff that includes Stephen King’s son Owen King (and King himself for the finale), the first four episodes of the miniseries largely bear out the wisdom of that approach. For all its apocalyptic sweep, The Stand is also a slow-boiling story that needs time to unfold, and miniseries do slow boil well.

This new version’s model is less Big Little Lies than Lost, however. Rather than proceed straight through from the narrative’s beginning to its end, this version of The Stand flashes forward and back, sometimes introducing characters before we learn their backstory then filling it in at a dramatically appropriate moment. (And borrowing from Lost is hardly a crime given how much that series, by its creators’ admission, owes to King in general and The Stand in particular.) There’s a lot to fill in, too, given how many of The Stand‘s characters make it to the screen here.

James Marsden stars as Stu Redman, an everyday Texan who discovers he’s immune to a weaponized superflu called “Captain Trips” that’s unwittingly been unleashed on the world by the American military. Redman’s the closest the series has to a central character but he’s more the still center around which the rest of the characters revolve. Those include Odessa Young as Frannie, a pregnant Maine resident who, following a dream vision, makes her way to Boulder, Colo., with the help of Harold (Owen Teague), an antisocial would-be science fiction writer whose crush on his companion threatens to tip over into obsession. Also on hand, Larry (Jovan Adepo), a drugged-out low-level pop star forced to sober up by the end of the world; Glen (Greg Kinnear), a frequently stoned professor; Henry (Nick Andros), a deaf drifter; Ezra Miller as a criminal who comes to be known as Trashcan Man; Amber Heard as the seemingly pleasant schoolteacher Nadine; and many more. And, occupying the poles of good and evil, Whoopi Goldberg plays the stately centenarian Mother Abigail opposite Alexander Skarsgård as the demonic Randall Flagg.

It takes three episodes for The Stand to introduce most of its major players, but it largely feels like time well spent. Boone and Cavell slowly draw everyone together while depicting the drama they encounter along the way, from a rat-filled journey through the New York sewer system to a terrifying encounter with a self-described “Alpha” on a barren highway. The series’ generous budget keeps its post-apocalyptic America convincing and its tense moments deliver the scares. If these first four episodes offer little in the way of unforgettable moments, they’re always intriguing enough to keep curiosity burning about what will happen next (or, for those who know the book, how the series will stage or reshape it).

It’s smartly cast, too. Goldberg brings humanity and humor to a character who can read as a bit of a cliché on the page and Skarsgård’s appropriately creepy in his initially fleeting appearances. If there’s a standout here it’s Teague, who plays Harold as an incel sociopath who can just pass as an ordinary, happy citizen. In one of his best moments he fakes his way through the rebuilding utopia with a smile that tries to look winning but mostly looks like Jim Carrey in full manic mode.

Whether or not the adaptation will remain compelling to the end remains to be seen, but it has all the elements to pull it off, including a respect for the material that isn’t afraid to streamline when necessary. It also, however accidentally, speaks to our current moment with its devastating disease and its depiction of a nation deeply divided and struggling to define the future. But the divide, if not the disease, has long been with us. Maybe that’s why The Stand has endured, why there have been so many attempts to adapt it — and why this will likely not be the last adaptation it will see. It’s a sometimes overstuffed, sometimes overly simple book, but also one whose vision of a fantastic America whose potential for greatness and moral clarity is always at war with its self-destructive impulses. Even if many missed it at the time, King found a way to express an underlying truth about the place he calls home. The best parts of this adaptation channel that well.

The Stand premieres Thursday, Dec. 18 on CBS All Access. New episodes will air weekly on Thursdays.