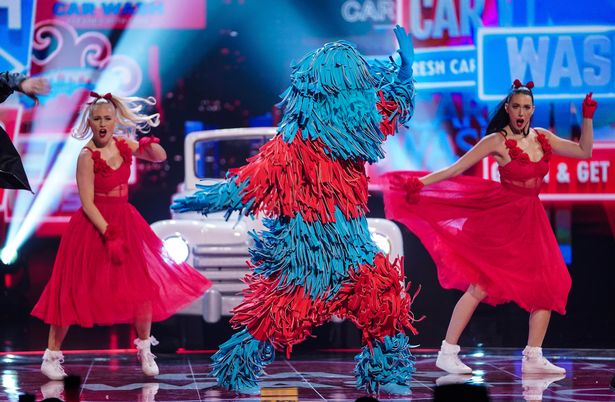 The Masked Dancer has been replaced by the football on Wednesday night – and fans of the show are far from happy.

The spin-off series to The Masked Singer has been a daily present on ITV since it first aired on Saturday.

So far, four celebrities have been unveiled, with the latest – Eddie ‘the Eagle’ Edwards as Rubber Chicken – baffling fans being revealed on Tuesday night’s episode.

But the show’s viewers will have to have an enforced break from the dancing on Wednesday to make room for England’s friendly clash with Austria.

And fans are not impressed with the decision as they eagerly await the unmasking of the remaining dancers, including Car Wash, Frog and Scarecrow.

Presenter Joel Dommett asked the star, who famously finished last in his chosen field in 1988, how he’d liked his time on the show.

The skier-turned-dancer replied: “It has been the most amazing time, I loved it, I could just play, I had so much fun.”

And fans seemingly loved his appearance too. One tweeted: “2020 was crazy enough but if someone told me in 2021 Eddie The Eagle would be dressed as a chicken on TV dancing to Mambo No 5 I would have thought they were tripping #MaskedDancer#MaskedDancerUK “.

So far in the series Jordan Banjo is been revealed as Viper, Flamingo turned out to be Louise Redknapp, and Dita Von Teese was Beetroot.

The Masked Dancer continues on Thursday, June 3 at 7.30pm on ITV.