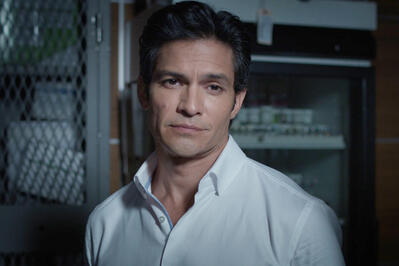 [Warning: The following contains spoilers for Season 4, Episode 2 of The Good Doctor. Read at your own risk!]

The Good Doctor’s two-part premiere concluded Monday night after a second hour saw the doctors of St. Bonaventure bring the COVID-19 pandemic to manageable levels. The second episode also allowed fans to spend a little more time with Dr. Melendez (Nicholas Gonzalez), as Claire (Antonia Thomas) imagined her former mentor and almost-boyfriend helping her track down an Army veteran whose dog tags were found in the emporium of personal belongings the hospital had acquired in the pandemic. Claire’s journey throughout the premiere dealt with the overwhelming grief and loss the COVID pandemic has caused the world amidst the chaos and fear.

Having Melendez, who died in the Season 3 finale, return, even if only in Claire’s mind, allowed The Good Doctor to show how Claire’s own journey with grief parallels those of her patients and their families. It also reinforced for fans that while Melendez might be “gone,” he is definitely not forgotten within the heart of the show.

“It was lovely to see [Nicholas] and lovely to have him back,” series star and executive producer Freddie Highmore told TV Guide. “At the end of Season 3, we’re all hoping that this isn’t the last that we’ll have seen of Dr. Melendez. Certainly, I wanted more of that story. And I feel like more people did. This is a lovely way to bring him back that’s in keeping with the emotional — the sort of character development and understanding in a deeper way, what Claire is going through from her loss.”

Claire is not the only one who had a strong connection with Melendez, and several members of the team didn’t get a chance to say goodbye to him as they dealt with the fallout of Season 3’s season ending earthquake. So are there more people who could use a spiritual visit from Melendez in Season 4?

“You never know,” Highmore teased. “At least these first two episodes show that there’s a definite possibility [for him] to remain a part of the show in certain ways, so absolutely. As we would have said at the end of Season 3, I think that still stands today… hopefully, he will continue to be a part of [the show] in whatever ways possible.”

For now, the doctors and residents at St. Bonaventure are going to try and move on. While they can’t ignore COVID completely, it won’t be the central focus moving forward in the season and the next big obstacle will be the residents taking on interns and showing them the ropes. Get ready for Shaun, the mentor.

“That’s certainly going to be the big challenge for him this season — learning to be responsible and take responsibility for other people,” Highmore confirmed. “We’ve seen him grow and learn as a surgeon, and get better at his job as all the other residents do. But it’s a completely different level of challenge to have to now be responsible for others and to teach other people the things that he himself has learned. I think we are all aware of the fact that Shaun would be very good at you know, he has an amazing level of medical insight, and I think he’ll be a wonderful teacher in those ways. Perhaps where he will struggle is the more you know, personal pastoral care that he will need to give to these young recruits. That will certainly be interesting. It is really exciting to have new people come in to the show with a with a fresh sense of energy, and they’re all wonderful people. And also the characters are really interesting, so I’m excited for everyone to get to meet them.”

Good luck to the newbies and Shaun, because we know that’s going to be a ride.

The Good Doctor airs Mondays at 10/9c on ABC.