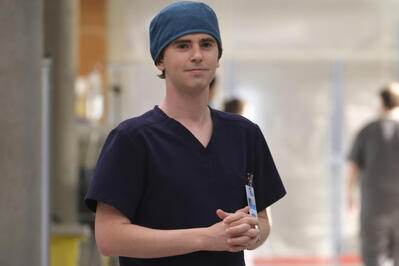 [The following contains spoilers for the Season 4 premiere of The Good Doctor. Read at your own risk!]

The Good Doctor is back! And while we are happy to see Dr. Shaun Murphy back to treating patients and the doctors of St. Bonaventure Hospital making us feel safe on a weekly basis, the premiere was an anxiety-fueled look at what real-life doctors have been dealing with for the majority of 2020 as they work on the front lines of the coronavirus pandemic. Starting the season by addressing the biggest health crisis of the modern age was very intentional on the part of the creative team behind the show.

“The world has changed dramatically since since we last saw The Good Doctor, since the last episode aired. Of course, we felt and David [Shore, executive producer] felt like he wanted to reflect that reality on the show,” series star and executive producer Freddie Highmore said of the season’s opening episodes. “I think for all of us, and certainly for me, the most important thing that we are doing by having the coronavirus be a part of these first two episodes is paying tribute to the real doctors. I think we’d be doing a disservice to them and the reality that they’ve lived over the last few months if we were to just somehow ignore it and continue on in a different world. It really is put into perspective, the fact that we only are pretending to be real doctors, but the people who are genuinely putting their lives at risk every single day deserve that tribute and deserve to be recognized for this huge undertaking that they’ve been forced to deal with over the last few months.”

Each doctor on the show faces different difficulties due to the virus. Lim (Christina Chang) as Chief of Surgery is in a constant battle to get medical supplies for testing and treating patients. Claire (Antonia Thomas) struggles with all of the death around her, reminding her of losing Melendez (Nick Gonzalez) mere weeks before the pandemic really set in. Glassman (Richard Schiff) has to act as president of a hospital in crisis while unable to leave his house because he’s part of an at-risk age group. Morgan (Fiona Gubelmann) adjusting to life as an internist instead of a surgeon. Andrews (Hill Harper) returns home every night to sleep in the garage to avoid the risk of passing the virus to his wife. Shaun, too, deals with trying to balance a new relationship where he’s not allowed to see his girlfriend due to his risk of exposure.

Even though the virus is affecting every aspect of the lives of the doctors at the hospital and the people closest to them, Highmore says the pandemic will not be the central storyline for Season 4.

“It won’t be the focus of the entire season. I like to think to this is a hopeful show. It’s a show that has always been that way and tried to find the positives in whatever negative situation arises, and I think we’ll continue to do that this season. Even in the first two episodes that deal with this huge traumatic event, especially for the doctors on the show — there’s still this attempt to mine those little moments of hope,” he explained, adding that the show will try to highlight these lighter moments.

“All of us over the last few months have come to appreciate and celebrate those little moments in life that we might have taken for granted,” he added. “You know, just a simple hug between someone that you love or getting to spend, you know, a certain amount of time with a small group of friends —  stuff that we just that we just thought was normal and didn’t really think about, and I think The Good Doctor will, as it’s always done, kind of seek to celebrate those those little tiny moments and find hope and positivity and celebration in that.”

For Shaun, a big priority this season will be trying to make his new relationship with Lea (Paige Spara) work. In the season premiere, we saw him struggle with the physical distance between them, even though Shaun was adamant about not risking Lea’s health in order to be closer to her. A disastrous attempt at phone sex proved that the physical barrier between them would not be a simple hurdle for Shaun to overcome, but even once the show moves past the pandemic-centric episodes, he and Lea are going to have their work cut out for them.

“I think Shaun and Lea this season will have another level of dealing with — I hesitate to call it kind of ‘relationship drama’ because it feels like that trivializes it a little bit too much — but I think this season is is certainly seeing a more mature show,” Highmore teased. “It’s less about dating. It’s less about those kind of early, you know, romances and going on dates and all that sort of thing. It’s more now that he and Lea are in a relationship and have chosen to be together, what are the more mature things that that each of them will have to deal with and learn to grow with and navigate.”

The Good Doctor airs Mondays at 10/9c on ABC.