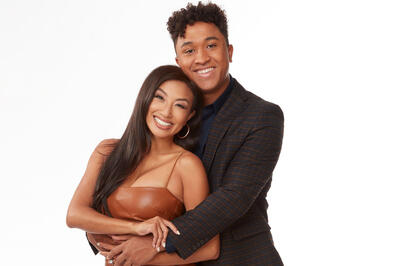 This week on Dancing with the Stars was supposed to be a double elimination, but Jeannie Mai had to drop out of the competition due to being diagnosed with epiglottitis, an inflammation of the throat. Because of that, only one dancer was sent home tonight. The show also debuted Relay Dances, which involve splitting the pairs into three groups, dancing a relay of either the Cha Cha, the Samba, or the Viennese Waltz. After each couple dances, one judge ranks the couples within each group, and bonus points are awarded based on the rankings. Those bonus points are combined with the individual scores and live voting to determine who gets sent home.

Kaitlyn Bristowe and Artem Chigvintsev
Dance/Song: Jive / “Don’t Stop Me Now” by Queen
How They Did: The jive is such a tricky dance because the tempo is super quick, but Kaitlyn does a great job. She’s got high energy, she doesn’t miss a step and her smile never falters — however, she is not as crisp as she could have been and the judges ding her for it. This girl just cannot win with them.
Score: 25/30

Nev Schulman and Jenna Johnson
Dance/Song: Viennese Waltz / “Stuck with You” by Ariana Grande and Justin Bieber
How They Did: Nev has definitely established himself as a frontrunner. He is so light on his feet and he is definitely not one of those celebs where the pro just dances around them. He dances with Jenna — they also have great chemistry on the floor. This was not the most exciting routine, but it was lovely, despite a few slip-ups here and there. But Bruno Tonioli says Nev is “oozing charm and charisma” and he’s great at leading, which is all true.
Score: 27/30

Justina Machado and Sasha Farber
Dance/Song: Samba / “Magalenha” by Sergio Mendes
How They Did: This was a lot of fun because Justina is so adorable, but the dance just doesn’t flow at all. You can tell she’s trying so hard, but her concentration is almost making the dance stiff. The judges are very kind to her, but Justina might be in danger of going home this week. Still, she’s having a ton of fun and that’s a lot of what matters. But then… whoa. They give her all 9s for a 27. Wow. There’s no way that dance was better than Kaitlyn Bristowe’s dance.
Score: 27/30

Nelly and Daniella Karagach
Dance/Song: Rumba / “Nobody Knows” by the Tony Rich Project
How They Did: Nelly dedicates his dance to his late sister, Jackie, who died of leukemia in 2005, which is a heartstring-tugging intro. However, Nelly is still one of the weaker dancers. He does his best with the rumba, but it’s an incredibly slow dance and that makes it hard to hide imperfections. Daniella does the lion’s share of the work this week again.
Score: 21/30

Chrishell Stause and Gleb Savchenko
Dance/Song: Viennese Waltz / “Love on the Brain” by Rihanna
How They Did:  It’s always cool when DWTS gets an actor or actress who can really sell the story of the dance. This routine would have you think Chrishell and Gleb are fiery lovers. It’s so sexy that the dancing is almost beside the point — though the dancing is pretty good! But the Viennese waltz is not typically a sexy dance, it’s more of a floaty dance, but this one was super hot. Chrishell could be a frontrunner if she keeps this up.
Score: 24/30

Skai Jackson and Alan Bersten
Dance/Song: Salsa / “Work It” by Missy Elliott
How They Did: This one lets Skai show off some of her bubbly, youthful personality, so it works for me a lot better than last week’s dance, even if last week’s dance was technically better. This one is just so much fun, even if it was a little loose at times.
Score: 25/30

Johnny Weir and Britt Stewart
Dance/Song: Foxtrot / “Wonder” by Shawn Mendes
How They Did: Weir builds on his great dance from last week with this. He is so light on his feet and so graceful. Two weeks in a row his figure skating background has really helped him shine.
Score: 27/30

Jeannie Mai and Brandon Armstrong
In lieu of dancing, Jeannie talks to her fans from the hospital where she just underwent emergency throat surgery. She has an abscess that became so infected that it started spreading to the rest of her throat and sinus areas. Brandon says, “I couldn’t have asked for a better partner this season, she’s made this journey so special.”

AJ McLean and Cheryl Burke
Dance/Song: Rumba / “Way Down We Go” by Kaleo
How They Did: This might be AJ’s best dance so far. He is sexy and emotional and really giving it his all, and the rumba is a hard dance. If you aren’t into it, it shows in spades because it’s such a slow dance. But AJ and Cheryl kill this number. Unfortunately, the judges wanted more rumba content, but they liked the passion, so it’s hard for them to judge.
Score: 24/30

Relay Dance No. 1, Cha Cha judged by Carrie Ann Inaba
The first relay dance includes Nev, Nelly, and Chrishell. Nev kicks things off really well, with lots of fancy footwork and crisp moves. Chrishell takes over and acquits herself pretty well, even if she could have been a little sharper and she gets out of sync at one point. Then Nelly comes out and he actually does OK, certainly better than his earlier rumba. Carrie Ann does say he improved the most over his first cha cha. Nev gets three bonus points, and Chrishell and Nelly each get two.

Relay Dance No. 2, Viennese Waltz judged by Derek Hough
This dance was supposed to include Jeannie, but she is obviously not dancing, so now it’s just Johnny and Justina. Justina goes first, which is good because while she is lovely, she cannot compete with Johnny on this dance. He is so lyrical and flowing, it’s just beautiful. Derek actually calls Johnny “phenomenal,” so obviously, he gives Johnny three bonus points and he gives Justina two extra points.

Relay Dance No. 3, Samba judged by Bruno Tonioli
The final relay dance is AJ, Kaitlyn, and Skai. AJ and Cheryl are so adorable during their segment that I didn’t want them to stop dancing. Kaitlyn also does a great job and so does Skai. Really all three of them could get three bonus points, but Bruno decides to give Skai two and AJ and Kaitlyn three bonus points each.

Elimination: The bottom two are revealed to be Skai & Alan and Chrishell & Gleb, which is shocking. Neither one of them should be going home. The judges choose to save Skai and Alan, so Chrishell Stause is heading home.