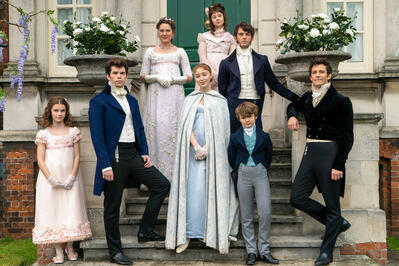 [Warning: The following contains light spoilers for Season 1 of Bridgerton. Read at your own risk!]

Hello, if you are here, we presume that you have discovered the delightfully delicious Bridgerton on Netflix. The soapy Regency-era romance is an adaptation of Julia Quinn’s beloved series of novels and the first gem to come out of Shonda Rhimes’ massive overall deal with Netflix. However, while you’ve been admiring the Duke (Regé-Jean Page) and making your Lady Whistledown suspect list, did you notice that our heroine Daphne (Phoebe Dynevor) has four brothers — Anthony (Jonathan Bailey), Benedict (Luke Thompson), Colin (Luke Newton), and Gregory (Will Tilston) — who all play varying roles in her budding romance with the Duke?

Yes, you read that number right. There are eight Bridgerton siblings in total, with four of them being Daphne’s brothers. And your eyes aren’t playing tricks on you, each one is accounted for within the series but with so many characters to keep track of it might be a little difficult to tell them apart on your first viewing (it’ll be a piece of cake when you undoubtedly return for repeat helpings). Here is your essential guide to telling the Bridgerton lads apart.

Played by: Jonathan Bailey
Position in the family: Eldest son (the new Viscount)
Hobbies: Blocking any suitors Daphne might enjoy spending time with, drinking with the Duke at the club, having sex with opera singers before big family events
Physical traits: Look for the sideburns. If you’re not getting Pride & Prejudice–Wolverine vibes, you’re looking at one of the other brothers.

Played by: Luke Newton
Position in the family: Third-eldest Bridgerton
Hobbies: Traveling, courting his neighbors, being the most gentlemanly of the gentlemen
Physical traits: He’s got a baby face with brown hair and brown eyes. Another way to tell is to check and see if Penelope (Nicola Coughlan) is nearby shooting heart-eyes in his direction.

Played by: Will Tilston
Position in the family: The youngest Bridgerton family member, the second youngest of all the Bridgerton siblings
Hobbies: Running around the manor, flicking peas at his sister
Physical traits: This one is easy — he’s the tiny tot, but we didn’t want him to feel left out. His adorable antics inadvertently help Daphne sort out her true feelings for the Duke, so he’s a bit of a hero!