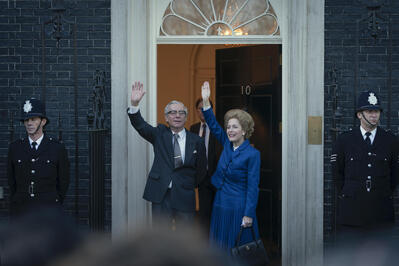 [Warning: The following contains spoilers for Season 4 of The Crown. Read at your own risk!]

“She is such a complex character,” said Gillian Anderson of Prime Minister Margaret Thatcher, her role in the highly anticipated fourth season of The Crown. Thatcher’s introduction, as well as that of Lady Diana Spencer (Emma Corrin), makes for a volatile season that undoes most of the goodwill the Netflix drama has built up for Queen Elizabeth II (Olivia Colman) and the extended Windsor family over its first three seasons. Caught out by Diana’s immense popularity and Thatcher’s bulldozing approach to governing, the crown finds itself on the defensive yet again, unable and uninterested in evolving for modern times. But out of all of the challengers to the Queen’s authority and power over the course of the series, it’s Thatcher who proves herself a true foil — a true equal.

“On one hand, they’re both women of a similar age in positions of power, which is such a unique situation particularly for that era,” Anderson told TV Guide. “There are some significant similarities beyond that; they both had very strong faith, they’re both mothers. You’d think that the two of them, as heads of state, would find some kind of common ground and a sense of ways to move the country forward.”

But from the pair’s discouraging first meeting, in which Thatcher rebuffs the Queen’s excitement over two women holding the highest authority in the land, these powerhouses are set on a collision course. Every subsequent interaction between them, from a disastrous visit to Balmoral Castle to disagreements over the Falklands War, seems to further chill the air in their escalating cold war. Their climatic showdown happens at the annual summit of the Commonwealth heads of government, where they face off over imposing sanctions against apartheid-era South Africa. The fallout from that confrontation — which involves the Queen leaking a story about her immense disappointment with the prime minister’s lack of empathy over a pressing human rights issue and subsequently firing her press secretary in order to cover up the scandal, all of which works in Thatcher’s favor — is one of the rare instances in the series when the crown takes a big, fat public L. What makes it even rarer is that it evolves from the Queen trying to use her power for good, rather than remain neutral, as is the tradition of the royal family.

The Queen’s power, after all, as Thatcher herself points out at the end of the season, is in doing nothing. That is why it’s inevitably Elizabeth who has the last laugh when Thatcher is unceremoniously ousted by her own party after a decade of service.

“At the end of the day, it was hubris. [Thatcher] really believed she knew best,” said Anderson. “What she wanted was that the royal family should exist, but just stay over there and let her get on with running the country.” What Thatcher had failed to factor in is that while prime ministers and governments come and go, the British monarchy remains eternal.

In a touching final scene, the Queen, moved by Thatcher’s visible emotions over leaving 10 Downing St., invites her to the palace and awards her a medal for extraordinary service to the country. Anderson points to this moment as a true sign of respect between the two women, despite the chasmic rift between them.

“They were such different women — different characters, personalities, such different ways of handling situations and problems. It was bound to fracture,” Anderson said. “But [Thatcher] grew up with a huge amount of reverence for the monarchy and ultimately for the Queen. Despite their differences, she does remain a monarchist till the end.”

The Crown Season 4 is now streaming on Netflix.