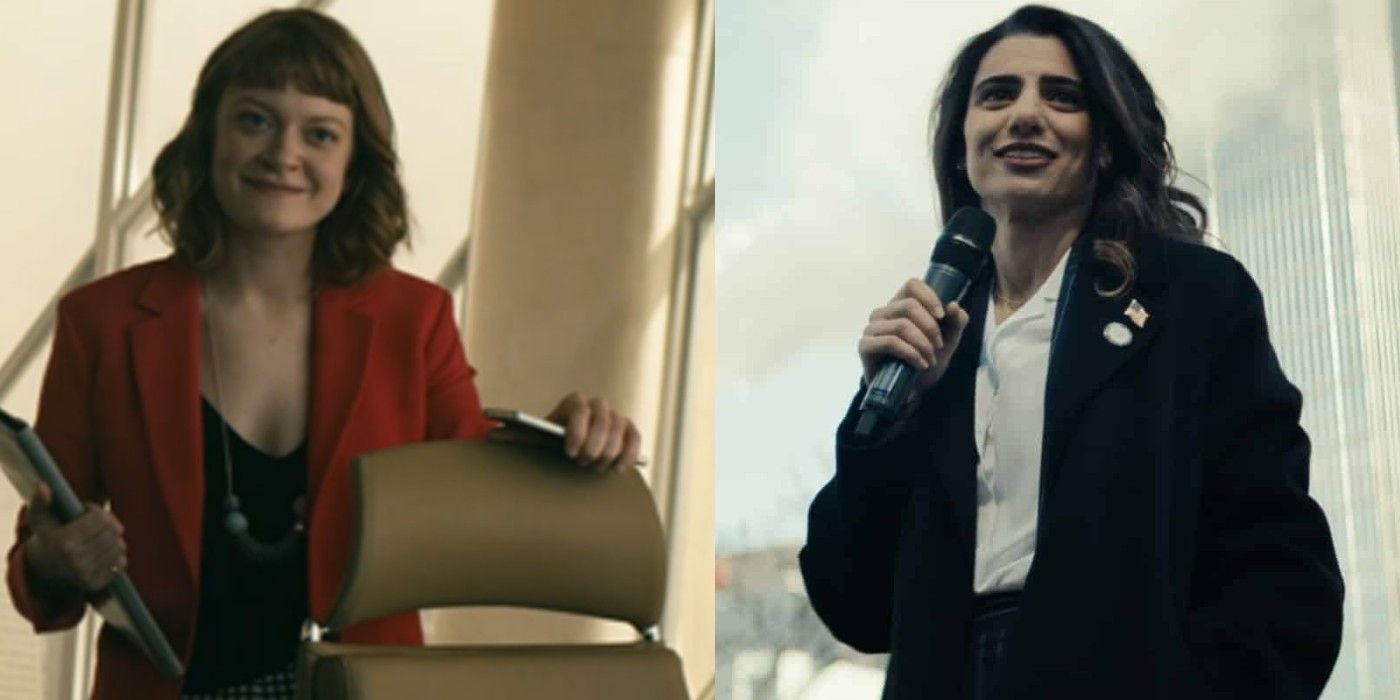 The Boys has promoted Claudia Doumit and Colby Minifie to series regulars for its upcoming season 3. Created by Eric Kripke for Amazon Prime Video, The Boys is a dark superhero drama series based on Garth Ennis and Darick Robertson’s best-selling comics of the same name. The show follows an eponymous band of vigilantes as they endeavor to take down The Seven, a corrupt group of superpowered individuals that is owned and merchandised by a formidable corporation known as Vought International. Celebrated actors including Karl Urban, Jack Quaid, Antony Starr, Erin Moriarty, and Karen Fukuhara headline The Boys‘ star-studded ensemble cast, which has now been confirmed to grow even larger in season 3.

Minifie has starred as Ashely Barrett in The Boys since season 1. At first, Minifie’s Ashley served as Madelyn Stillwell’s (Elisabeth Shue) assistant and the Director of Talent Relations at Vought International. But after Madelyn’s death, she becomes Vought’s Senior Vice President of Hero Management upon Homelander’s (Starr) insistence. Ashley, however, has no authority over The Seven; rather she is only there to keep Homelander informed. Claudia Doumit, meanwhile, entered The Boys in season 2 as Victoria Neuman. Initially, Doumit’s Victoria appeared as an unsuspecting wunderkind Congresswoman who loathed The Seven and Vought for their barbaric use of Compound V. But in the season 2 finale, her ulterior motives came to the fore as she was revealed to be the one responsible behind the head explosions during the hearing against Vought.

On Friday, Deadline confirmed that The Boys has upped Claudia Doumit and Colby Minifie to the main cast for season 3. The site noted that the actresses had recurred in the show previously, but did not divulge any information about their updated roles in the series. Eric Kripke, meanwhile, also confirmed the development in a tweet. While he too didn’t reveal much about how Victoria and Ashley’s extended screen presence will affect the series, he did mention that he’s “got some weird shit lined up for them in Season 3!“ Check out Kripke’s tweet below.

Both Doumit and Minifie reacted to their promotion in The Boys season 3. Doumit, who has also previously worked with Kripke on the NBC sci-fi TV-series Timeless, posted an Instagram story featuring the news about her advancement in The Boys. She noted that she was “beyond excited” over Victoria’s upgraded role. Minifie, who is best known for her roles in Fear the Walking Dead and The Marvelous Mrs. Maisel, also took to Instagram to express gratitude. The Boys cast is also ecstatic about Doumit and Minifie’s extended presence in The Boys season 3. Stormfront actress Aya Cash, for instance, expressed glee about how fans will get to see more of the “two goddesses” in The Boys‘ upcoming season.

Doumit and Minifie’s promotion in The Boys season 3 has certainly excited fans who are eager to see more of Victoria Neuman and Ashely Barrett. Doumit’s furtherance to the main cast is fairly unsurprising as The Boys season 2 had already set her up for a pivotal role in the next season. Minifie’s promotion, however, is a point of intrigue as her character Ashley is often overlooked in the series. Ashley lacks control, yet her lack of morals matches with Vought’s corrupt temperament. But at the same time, she has also shown some degree of compassion. Now with a full-fledged role in season 3, it’s likely that Ashley will get back at Homelander for mistreating her. She might also take up a more imposing role in her workplace.