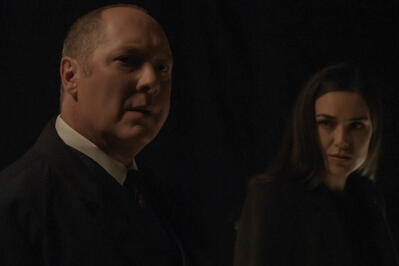 The Blacklist, NBC’s endlessly twisty conspiracy thriller, returns for Season 8 on Friday, Nov. 13. The new season — which won’t be animated — will pick up where the abbreviated seventh season left off, with Elizabeth Keen (Megan Boone) allying with her ruthless ex-KGB agent mother Katarina Rostova (Laila Robins) against Raymond Reddington (James Spader) and Rostova’s father Dominic Wilkinson (Ron Raines, taking over the role originated by the late Brian Dennehy), who are keeping secrets about Reddington’s true identity and why he came into Liz’s life that Liz needs to know. And Liz, who learned deviousness and amorality from Reddington, will do whatever it takes to find out the truth, even if it means turning her life upside down and causing a lot of pain for her loved ones. Not even Red knows how much Liz has turned against him, which puts him in the rare position of not having all the information.

It also puts a lot of strain on her relationship with her FBI colleague Donald Ressler (Diego Klattenhoff), her close confidant and will they/won’t they counterpart. At the beginning of the series, Ressler didn’t trust Liz because of her mysterious connection to the criminal Reddington. But over the years, he grew to not only trust her professionally but care about her intimately, even sharing his biggest secret with her. “And now, realizing, as soon as he does, that she is committed to this path that might be dangerous for her, and might result in the end of the relationship that they have had to date, I think it brings out an incredibly intense desire to express feelings that have been sort of latent for so long,” executive producer John Eisendrath told TV Guide.

Season 8 is being filmed in concordance with New York’s COVID-19 production safety protocols, and so far hasn’t had to shut down for a positive case on set, unlike a lot of productions. There are many things they’re doing differently this season on The Blacklist, from putting in the time and effort to comply with the safety protocols to maybe having fewer actors in a scene than they normally would, Eisendrath said. “Obviously we make adjustments, but what we’ve seen so far of the filming of the episodes, I think the viewer experience will be unchanged, which we’re very pleased about,” he said.

Unlike many other shows, The Blacklist will not be dealing with the pandemic in its storyline. “We feel like each one of these episodes should be an hour to step away from the nightmare that has been COVID and sort of a bit of escapism, hopefully,” creator Jon Bokenkamp said.

That doesn’t mean there aren’t some things that will remind viewers of the outside world, even if they’re coincidental. In the opening scene of the season, a character wears a surgical mask, supposedly to protect from nuclear radiation coming off of another character. “Jon and I, we laugh about it, because, ironically, that scene and that person wearing a mask was written before the pandemic,” Eisendrath said.

For the scene, which was originally supposed to be part of Season 7, there needed to be a reason for people to not want to follow this character into a room, and they settled on saying the guy in the room had an incredibly contagious viral infection. Then, a few weeks later, production was shut down because of coronavirus. When the writers’ room reconvened, they tried a version of the scene where COVID was mentioned by name. “And then we were like, ‘People watch this show for an escapist experience,’ and we changed it to a nuclear [sickness],” Eisendrath said.

People also watch this show for the case-of-the-week episodes where the task force tracks down a given Blacklister, and the producers said that after the first few episodes of the season, which will be heavily serialized and deal with the current Liz and Red storyline, there will be “some really great and unusual and dangerous and fun Blacklisters each week,” Bokenkamp said. Eisendrath added that they’ll have some overarching bad guys this season, too, with one in particular playing an “outsized role for a good portion of the season.”

The Blacklist Season 8 premieres Friday, Nov. 13 at 8/7c on NBC. It will be available to stream on Peacock.