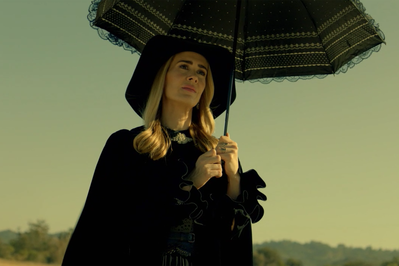 Fans will have to wait a bit longer than usual for American Horror Story Season 10. However, that means that we only have more time to speculate about what Ryan Murphy has in store for us in this milestone installment. We’ve already had ghosts, aliens, evil Nazi doctors, freak show performers, killer clowns, more ghosts, more killer clowns, the literal apocalypse, and a cursed summer camp. But even after all this, AHS still finds ways to surprise us every single season.

As details are slowly emerging about what to expect in American Horror Story Season 10, we already know it’s got a stellar cast in place and have gotten some clues about the theme (or at least what was supposed to be the theme). So, what’s coming up in AHS next season? We’re rounding up everything we know so far below.

Production began in October. On Aug. 28, Ryan Murphy shared on Instagram that production would finally begin — fittingly — in October.

Teeth are involved. Murphy unveiled the poster for the new season on social media in November. It features a mouth with a set of sharp teeth (resembling a picture of sharp teeth he shared in August) as a gloved hand tattoos “AHS10” on the tongue. (He also notably tagged Provincetown, Mass., as the location on his post.) Are we talking mermaid teeth? Is there a JAWS tie-in? Maybe some Rocky Horror Picture Show vibes? We never can tell.

It might feature a major Murder House crossover. On April 26, Murphy shared an image of Rubber Man on Instagram with the very cryptic caption “Coming soon…” The idea that Rubber Man may make an appearance in Season 10 is pretty surprising given that the iconic rubber suit just returned in Apocalypse. However, since the upcoming season is a milestone one, it does make sense that Season 10 may pay homage to several different memorable moments and characters from the show’s past. And if Rubber Man does return, we still won’t know who will be in the suit until the new episodes arrive, giving us yet another thing to speculate about!

Sarah Paulson will officially return. 1984 marked the first season without Sarah Paulson, but the actress isn’t planning on making that a trend. The actress confirmed she’d be back for Season 10 in January. “I did ask Ryan [Murphy] if the question was asked to me, could I say that I was coming back, and he said ‘yes’ you could say. So, yes I will be back on American Horror Story,”Paulson said.

As for what type of character Paulson would like to play next, Paulson told TV Guide in October 2019 the only thing on her wish list is to work closely again with Evan Peters, who also sat out 1984. “I miss Evan and I miss acting with Evan. So I’d love to have that experience again,” Paulson said.

Evan Peters will also return for Season 10. It looks like Sarah Paulson got her wish. In February, Ryan Murphy revealed Evan Peters would be back to star in the upcoming 10th season of the FX anthology.

After Peters announced that he wouldn’t be appearing in 1984 in April 2019, the actor hinted the following month that he wasn’t ruling out a return to the series in the future. Yeah, absolutely, never say never,” Peters told Digital Spy. “I just… Yeah, we’ll see what happens.”

The season will be filled with other familiar faces. Murphy revealed in November 2019 that he had already begun reaching out to several “fan-favorite actors” to return to the series for Season 10. “Some people I haven’t reached out to yet because I was like, ‘Do I have a role for them?’ So far, everybody I reached out to said ‘Yes,’ so that’s been great,” he explained.

In February 2020, Ryan Murphy announced the cast for Season 10, including the returns of Kathy Bates, Leslie Grossman, Billie Lourd, Adina Porter, Lily Rabe, Angelica Ross, and Finn Wittrock. Neither Bates nor Porter appeared in 1984, and this will be the first time Rabe has done more than guest appearances since Roanoke.’

As is always the case with AHS, fans should be braced for other surprise returns throughout the season. Dylan McDermott, Cody Fern, Angela Bassett, Gus Kenworthy, Matthew Morrison, and Cheyenne Jackson all told TV Guide in fall 2019 that they’d be happy to appear in Season 10 in some capacity, so don’t be too shocked if any of them pop up for a guest appearance.

The theme may change. As a result of the production delay, Ryan Murphy revealed that he may now have to change the theme for Season 10, which was supposed to have a summer beach setting. “A lot of what I was going to shoot was dependent on a very specific moment, it was a weather-dependent show,” Murphy said. “So now I don’t know. I don’t know what we’re going to do. I don’t know what I’m gonna do next with that show. I don’t know if I’ll accelerate another season or wait till next year to shoot this one.”

That means that all of the information that’s been released about Season 10 may prove moot if the original theme gets bumped to Season 11. But it does sound like whatever eerie beach season Murphy had planned will happen eventually, even if we don’t get it next.

The casting announcement gave us our first clues on the original theme. The backdrop of the cast announcement Murphy shared on his Instagram page was a somber beach as Orville Peck’s “Dead of Night” played. Does this mean that we’ll be getting a moody beach adventure? Or, if you put more emphasis on the audio clues than the visual ones, will it be a desert trek? Sub Pop describes “Dead of Night” as “a torch song about two hustlers traveling through Nevada desert. Their whirlwind romance takes us on a dusty trail of memories — racing down canyon highways, hitchhiking through casino towns and ultimately, ending in tragedy.”

The first teaser image images are here. Ryan Murphy doubled down on the ocean imagery by sharing the first promo pic for Season 10 on his Instagram page in March. Murphy ominously captioned the image: “Things are beginning to wash up on shore…”

In May, he shared another image of a deserted beach with the caption: “American Horror Story. Clue.”

But what could this be teasing? Our first guesses: evil mermaids, sea monsters, shark attacks, sirens, a cursed message in a bottle, spooky Gilligan’s Island — hell, you don’t even have to work that hard to make the ocean terrifying! Rip tides are frightening enough on their own! American Horror Story: Rip Tides, coming to FX this fall. (We’re kidding, but also, would watch.)

It will reportedly film in Massachusetts. Local news reports have stated that Ryan Murphy Productions and 20th Century Fox Television had been scouting locations around Provincetown, Massachusetts — including dunes, beaches, and cemeteries — for a shoot at the end of March and in April, when AHS Season 10 was supposed to be beginning production. Murphy does have several shows in the works, but the fact that the location scout told Wicked Local that the series included “supernatural things happening” definitely has us guessing AHS will be moving the action back east.

There was a big clue as to the planned Season 10 theme in 1984‘s eighth episode. Ryan Murphy shared with us in October 2019 that the first seven episodes of 1984 didn’t feature any hints about his planned theme for Season 10, but that “there [would] be probably a big one in Episode 8.” While the specifics of what the clue is can’t be confirmed, some fans have guessed that the mention of Paris in the episode indicates the story will be inspired by the film Paris, Texas, while others are confident it will be a season primarily centered on cryptids. Of course, Bruce’s (Dylan McDermott) rantings about Mary Kay could also hint at a horrific take on multi-level marketing schemes, which actually sounds pretty fun.

The Lady of the Dunes case may be a key inspiration. Many AHS fans are speculating that the Lady of the Dunes will be an influencing factor in Season 10. The unsolved murder of a woman in Provincetown, Massachusetts, has troubled detectives since her body was discovered in 1974. And with theories about who she was and what happened to her ranging from connections to mobster Whitey Bulger, serial killers Hadden Clark and Tony Costa, or the 1975 movie Jaws, the Lady of the Dunes is a case ripe with its own lore and urban legends, making it easy to imagine a myriad of ways for it to play a role in AHS Season 10.

It might feature the return of the Coven witches. In addition to the potential return of Murder House‘s Rubber Man, Season 10 could bring back some other beloved characters from the AHS universe. Ryan Murphy revealed in December 2018 that he had plans to bring the Coven witches back for a third time, although it’s unknown whether that means Season 10 or a future season. “The witches will be back. Not next season [1984], though, but we have something really fun planned,” Murphy told Entertainment Tonight.

Although nothing is officially set yet, the stars seem eager to reprise their roles. “Any time I could play Cordelia, I would love to,” Sarah Paulson told TV Guide in October, while Angela Bassett said that she always has her New Orleans accent ready to go in case she’s asked to reprise the role of Marie Laveau again.

If Season 10 does feature the return of the Coven witches, Jamie Brewer told us that she’s hoping for the chance to dig into Nan’s history prior to her time at Miss Robichaux’s, and Angelica Ross has shared that she’d love to return to play a new witch character.

The stars are split on whether they want it to be an alien season. When speaking with TV Guide in October, Cheyenne Jackson, Gus Kenworthy, and Lily Rabe all expressed excitement over the possibility of aliens returning to AHS for the first time since Asylum. “I feel like they’ve definitely done the alien thing a bit but I just feel like there’s so much to explore there. It’d be kind of cool to do something with extraterrestrials,” Kenworthy said.

However, Sarah Paulson and Angela Bassett aren’t so sure of the prospect of an alien-themed season. “That might not be my jam,” Paulson told TV Guide. “Unless I could play the alien.”

“I don’t know, I don’t know about that. But they could make it work,” Bassett added.

For his part, Murphy has acknowledged how much AHS fans have been calling for an aliens-themed season, but said that there’s one main obstacle to pulling something like that off. “It would be hard because it’s called American Horror Story and you’d have to stay within the legal soil limits in order to make that work,” Murphy explained in November.

13 Stars You Didn’t Know Were on American Horror Story

It won’t be the show’s last. Despite speculation that American Horror Story would end after its milestone 10th season (rumors fueled, in part, by Ryan Murphy’s mega-deal with Netflix and Murphy literally saying it “may be our last season” following the 1984 finale), FX renewed the anthology series for three seasons in January. This guarantees AHS will run for at least 13 seasons and likely through 2023, if the show continues to air one season per year.

There’s a spin-off on the way. Murphy announced he was developing an AHS spin-off on his Instagram on May 11. Titled American Horror Stories, the upcoming FX series will consist of hourlong, self-contained stories and would likely feature several returning AHS cast members. Check out everything we know about the AHS spin-off here.

American Horror Story is available to stream on Netflix, Hulu, and Amazon.