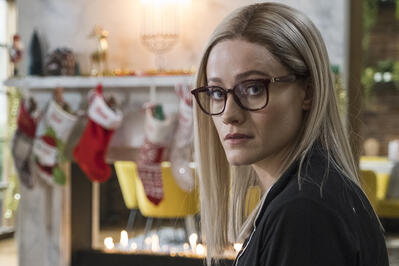 How would we have made it through this year without the pure escapism of supernatural television shows? While the world around us burns down, we can take a little virtual vacation doing some police work with Lucifer, taking on the Upside-Down with the kids of Stranger Things, or roaming the French forests in Black Spot. The supernatural offers the perfect escape for tired minds, injecting a little fantasy into the real world.

There’s a chance you’ve seen a few of the shows on this list already, because they’re popular — we don’t discriminate against shows that are well liked! — but there’s also a good chance you’ll find a few new ones too, as we’ve attempted to include some international gems and newer programs that you might not have gotten around to watching yet. You’ll also find a variety of supernatural elements, aka there’s more to the supernatural genre than just vampires and werewolves, which means there’s a nice selection to choose from. So check out the list below and get to streaming!

For a show about young adults with special powers who go to an actual academy to hone their skills, wave your magic wand (remote control) and make The Magicians appear out of thin air (turn on Netflix). The Syfy series, based on the book series some describe as “Harry Potter for adults” and adapted for television by You‘s Sera Gamble, is set in a world where magic is real and those with an aptitude for it are invited to attend the mystical college Brakebills University for Magical Pedagogy. But don’t expect these kids to pull never-ending handkerchiefs out of their sleeves or turn your ears into change dispensers. These students get involved in some really dark, apocalyptic arts, and the series features one of the most shocking deaths in television in the last several years.

Lucifer, which was saved by Netflix after Fox canceled it, is based on The Sandman comics. The show stars Tom Ellis as Lucifer Morningstar — also known as the Devil — who has traded the horrors of Hell for the lights of Los Angeles, where he runs a nightclub and also moonlights as a consultant for the LAPD, as one does. The series, which just recently debuted its fifth season, deftly mixes supernatural horror with elements of the police procedural, and while it takes itself and its characters seriously, it also knows how to have fun. It’s a bit like Supernatural (which is also on this list) in that way.

This short-lived British horror-comedy from Misfits creator Howard Overman balances a brilliant sense of humor with fighting the supernatural to make for a quick and enjoyable binge. Crazyhead stars two young women — Cara Theobold and Susan Wokoma as Amy and Raquel, respectively — who become fast friends after finding themselves caught up in uniquely personal battles with demons only they can see. When a group of said demons try to bring about the end of the world, it’s up to the self-trained hunters to prevent that from happening, all while trying to navigate the familiar trials of young adulthood.

Penny Dreadful is the perfect supernatural show to watch if you’re looking to escape into an underworld where even the chills are literary. Showtime’s tastefully gory gothic horror stars Eva Green as Vanessa Ives, a powerful medium who keeps company with characters like Dracula (Christian Camargo), Victor Frankenstein (Harry Treadaway), and Dorian Gray (Reeve Carney). She’s even got a star-crossed romance with a gun-slinging American werewolf (Josh Hartnett). The drama is tightest in the second season, which pits Vanessa and friends against a coven of witches led by Helen McCrory, but Green’s ferocious performance is unmissable throughout. – Kelly Connolly

A suspenseful and atmospheric thriller, Black Spot is known in France as Zone Blanche, which refers to the fact the small, isolated town at the center of the series is a cellular dead zone, but there’s so much more to the mysterious town and show than that. The drama, which blends elements of the mythological with the fraught tension of crime dramas, kicks off with a prosecutor arriving in town to investigate why the murder rate is so high. What he — and the audience — soon find out is the forest surrounding the area is full of dark and inexplicable secrets, and as the series progresses and the head of the local police digs into both her past and the area’s past, a clear-ish picture begins to take shape. What is revealed is likely crazier than anything you could possibly dream up yourself, but somehow it all works.

If you’ve yet to watch Supernatural, the long-running WB-turned-CW drama about Sam and Dean Winchester (Jared Padalecki and Jensen Ackles), two brothers who travel America in their 1967 Chevy Impala and hunt monsters and demons and pretty much anything that threatens humanity, you’re in for a wild treat. Across 15 seasons, the series, which features an expansive mythology that includes heaven, hell, and everything in between, has taken its simple premise — saving people and hunting things — and added a great sense of humor, a classic rock soundtrack, and a willingness to take risks, and the result is a globally beloved drama that has, at times, been one of the most creative series on TV. Although its roots are in horror, that aspect fades after a little while and the series becomes the story of two brothers who would do anything for each other, including selling their soul to save the other. With the end of the show now approaching, it’s the perfect time to jump on board — provided you have a lot of free time on your hands, of course.

Featuring one of the wildest premises we’ve heard in some time, Netflix’s Warrior Nun follows an elite and secret order of highly trained nuns known as the Order of the Cruciform Sword, which is tasked with tracking down and killing demons on Earth. Based on a series of comic books, the show stars Alba Baptista as Ava, a young woman and former quadriplegic who is given a second chance at life — and the use of her arms and legs! — when an angel’s halo embedded in her back revives her from the dead, gifts her with special powers, and gives her the family she never had in the form of the Order. The series, which features many parallels with Buffy the Vampire Slayer, is a fun addition to the streaming service’s quickly growing supernatural catalogue.

At its core, The Innocents is a romance involving two love-struck teens, June and Harry (Sorcha Groundsell and Percelle Ascott), who ditch their rough and abusive upbringings for life on the road together. They have next to nothing to their names, and things are quickly made more difficult when June discovers she can shapeshift but doesn’t know how or why she has this power. The show, which explores themes of identity, is heavily influenced by the moodiness of Scandinavian dramas, and it’s the show’s unique tone and cinematography that sets it apart from other teen dramas with supernatural influences. We called this one of Netflix’s surprise hits back in 2018 when it debuted, and it still stands out today, especially because it features a supernatural element that isn’t explored too often.

We’ve recommended Wynonna Earp a number of times now, and we’re not about to stop anytime soon. The fan-favorite Syfy series, which has the kindest and most accepting fandom of any show on TV, follows Wynonna (Melanie Scrofano), the witty (and often whiskey-soaked) descendent of legendary lawman and gunslinger Wyatt Earp. Thanks to a family curse, she is tasked with sending revenants — the men and women Wyatt killed who became demons upon his death — back to hell upon her 27th birthday. She’s an admirable, if unconventional, heroine, and like so many others on this list, she is made better by the people surrounding her, a group that includes her younger sister Waverly (Dominique Provost-Chalkley), an immortal Doc Holliday (Tim Rozon), and a badass marshal named Xavier Dolls (Shamier Anderson), who’s way more than meets the eye. More allies join the team as the show progresses, but what makes the show stand out is its willingness to go in directions rarely seen on TV.

Curon, a new Italian supernatural series, draws more heavily on horror than some of the other shows on this list, so if that’s not your jam, you might want to skip it. But those who aren’t bothered by the show leaning heavily into the sinister and downright creepy will find an intriguing thriller about the double-sided nature of humanity as told through the story of evil doppelgängers replacing their doubles in a picturesque lakeside town. The show follows fraternal twins Daria (Margherita Morchio) and Mauro (Federico Russo) as they investigate the disappearance of their mother Anna (Valeria Bilello), who grew up in Curon but left after the death of her own mother many years ago. It admittedly takes a few episodes for the story to reveal itself and put the pieces in motion, but it’s worth your time if you stick with it.

No list about the best supernatural shows Netflix has to offer would be complete without the service’s extremely popular series Stranger Things, which kicks off in 1983 with the disappearance of Will (Noah Schnapp), a young boy from Hawkins, Indiana, after a nearby lab opens a portal to another dimension known as the Upside Down, allowing monsters into our universe. Bursts of comedy and horror combined with viewers’ collective nostalgia to make the series a pop culture phenomenon when it first debuted. Three seasons later, the stakes are higher than ever as the monsters from the Upside Down have gotten bigger and the threats they pose are more dire, but one thing remains the same: The show continues to be must-see TV.

Since the great French drama Les Revenants (The Returned) is no longer streaming on Netflix, we recommend the Australian series Glitch, which features an eerily similar premise in which multiple people in a small town return from the dead in perfect health with no explanation and no memories of dying. The mystery-driven show, which stars Patrick Brammall as a police officer who must confront the fact that his late wife is one of the Risen, aired its first season in 2015, but the third and final season only hit Netflix in the U.S. last fall. While certainly not as good as Les Revenants as parsing out the existential questions, the supernatural series is an addictive, and relatively quick, binge.