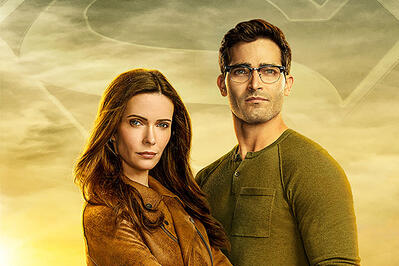 The Man of Steel is putting down roots in the Arrowverse. The CW superhero universe is expanding in 2021 with Superman and Lois, which will bring the eponymous duo into the CW lineup after they were first introduced on Supergirl.

Created by former Flash showrunner Todd Helbing, the Supergirl spin-off puts Lois (Elizabeth Tulloch) and Clark (Tyler Hoechlin) front and center as they juggle parenthood with their demanding jobs. Balancing saving the world with tight newspaper deadlines and raising rambunctious twin boys is sure to keep this dynamic duo on their toes, setting the stage for an interesting journey ahead. And given everything they went through in the 2019 Arrowverse crossover, Crisis on Infinite Earths, we’re hoping life in Smallville won’t be quite as traumatic.

Superman is getting a new suit: Warner Bros. released a photo of Hoechlin in a new suit in mid December. He’s wearing some new “super boots,” combined with a redefined neckline and cape. New muscle lines have been added, and this new iteration of the suit has a fresh paint job from the one Hoechlin has worn on Supergirl and during the Arrowverse crossovers.

Helbing previously teased a makeover for the iconic Superman costume. “Originally [Hoechlin] came on for the crossovers and that suit wasn’t built to sustain a series. And I think in just everything that we were talking about, we have a fresh slate,” he said at DC’s Fandome. “There’s going to be a really badass Superman suit in this show that we’re pretty excited about.”

We’ve got a first look at Lois and Clark. In December, The CW released a new image of Tulloch and Hoechlin as Lois Lane and Clark Kent, giving fans a look at their more casual side.

Tulloch said in a statement, “From the very beginning, going back to when she was introduced in 1938, Lois Lane as a character defied society’s expectations of how women should behave. Women at that point were more typically portrayed as demure, but Lois was always opinionated and unapologetic and uncompromising and a career-woman. Part of why she has remained so compelling for so many years is that she’s also vulnerable and fallible, romantic, and goofy, and a clutz… I find Lois inspiring in how little she gives a crap about what anyone thinks of her. She’s not doing the work for glory or more Pulitzers, she’s doing it because she believes in justice and truth.”

Filming on the series began in the fall. Tulloch revealed via Twitter that the cast began quarantining in Vancouver in mid-September ahead of shooting. “The last of the cast landed in Vancouver today to start their quarantines. Getting close!” she wrote.