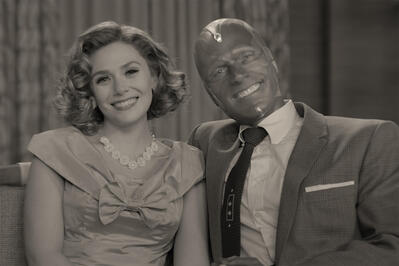 The Infinity Saga ended in 2019 with Avengers: Endgame and Spider-Man: Far From Home, but that is not the end of the MCU. The next phase of the story will be taking place both on Disney+ and in theaters, with the films and series continuing to build the connective tissue of the superhero universe. Here is what the entire Marvel slate looks like for the next few years, but below we dig into the Disney+ side of things to give you an idea of what’s coming to the streaming service in 2021 and beyond.

WandaVision sees Elizabeth Olsen and Paul Bettany reprising their roles as Scarlet Witch and Vision, respectively. A tonal mashup, the series is part classic sitcom à la The Dick Van Dyke Show and part Marvel blockbuster. From the official trailer, it’s clear that although it appears Wanda and Vision are now living their ideal suburban lives, they begin to suspect that everything is not as it seems — which makes sense, considering that Vision died in Avengers: Infinity War.

The show will also feature Teyonah Parris as an adult Monica Rambeau, who was played in Captain Marvel by Akira Akbar. Monica is the daughter of Carol Danvers’ best friend, Maria Rambeau (Lashana Lynch). In the comics, Monica eventually takes on the title of Captain Marvel herself after she gains powers when she is exposed to extra-dimensional energy.

Additional cast members include Thor‘s Kat Dennings, making her return as Darcy, and Randall Park, who is reprising his role from Ant-Man and the Wasp. Finally, Kathryn Hahn will appear as a nosy neighbor.

The series, which premieres Jan. 15 on Disney+, will be the first to tie directly into one of the MCU’s upcoming feature films, but it won’t be the last. Olsen is confirmed to appear in the Doctor Strange sequel, Doctor Strange in the Multiverse of Madness, in theaters March 25, 2022.

Falcon and the Winter Soldier is written by Malcolm Spellman and directed by Kari Skogland. Daniel Bruhl is confirmed to return for the series as Zemo, and you can catch a glimpse of him in the footage that Marvel/Disney+ released during its Super Bowl teaser. Meanwhile, Emily VanCamp will reprise her role as Sharon Carter/Agent 13, and Lodge 49‘s Wyatt Russell is portraying new comic book character John Walker.

The logo for the show features a certain shield, because as you’re probably aware, Steve Rogers (Chris Evans) handed over his iconic shield to Sam, and thus passed on the title of Captain America, in the final moments of Endgame. You can see Sam trying to get a feel for the shield in the opening of the Super Bowl teaser.

The six-episode series was originally set to be the first MCU Disney+ series, but its original August premiere date was delayed due to COVID.

Loki, a new limited series that finds Tom Hiddleston reprising his fan-favorite role, is still reportedly on track to premiere in the spring of 2021. Although the god of mischief met his demise at the hands of Thanos (Josh Brolin) in Infinity War, a different version of Loki escaped with the Tesseract during the events of Endgame, and that’s who we will be following in the new series, not the evolved man from Thor: Ragnarok.

“He’s still that guy [from Avengers], and just about the last thing that happened to him was he got Hulk-smashed, so there’s a lot of psychological evolution that has still yet to happen,” teased Hiddleston during San Diego Comic-Con 2019. In the first look footage, Loki can be seen getting up to his usual tricks.

Rick & Morty’s Michael Waldron will not only serve as showrunner but also write the pilot and executive produce. Like WandaVision, the series will tie directly into the events of the Doctor Strange sequel, Doctor Strange in the Multiverse of Madness, in theaters March 25, 2022.

Find out more about Loki

Marvel will take a brief break from its live-action Disney+ series during the summer of 2021 to debut the animated series What If…? The show is based on Marvel’s “alternative history” comics that debuted in the 1970s and looked at how things might have happened if key moments from the timeline had gone differently. This series imagines what might have happened if major events in the MCU films hadn’t played out the way we know them.

The 10-episode season is helmed by Ashley Bradley and features many Marvel actors reprising their roles from the films. The first episode will follow Hayley Atwell’s Peggy Carter and explores what would have happened if Peggy, not Steve, had been given the super-soldier serum.

Marvel is also working on a series starring Jeremy Renner as Clint Barton, who was first introduced in 2011’s Thor. The series, Hawkeye, originated as a film before being developed for TV. The show will introduce fans to Kate Bishop, played by Hailee Steinfeld, as Clint trains her to take on the mantle after he retires, and it will explore more of Clint’s time as Ronin after the events of Infinity War.

Hawkeye will be written by former Mad Men writer Jonathan Igla. It is set to premiere in late 2021.

Find out more about Hawkeye

Following the release of four Disney+ shows in the MCU that feature the characters whom movie and TV audiences already know and love, Marvel will introduce fans to Kamala Khan, aka Ms. Marvel, in Ms. Marvel. She will be the first Muslim character to lead her own Marvel superhero series. Bisha K. Ali of Hulu’s Four Weddings and a Funeral will serve as showrunner, with newcomer Iman Vellani taking on the title role. Vellani will also be joining Brie Larson in Captain Marvel 2.

Find out more about Ms. Marvel

Bruce Banner is no longer the only Hulk in the MCU. Marvel is launching a new series about She-Hulk, aka Jennifer Walters, who is an extremely intelligent lawyer who gives legal aid to various Marvel superheroes. Created by Stan Lee and artist John Buscema, she made her debut in Savage She-Hulk No. 1 in 1980. It was reported in September 2020 that Tatiana Maslany will be playing Walters in the upcoming series.

Mark Ruffalo will appear in the series as Jennifer’s cousin Bruce, and Tim Roth will reprise his role as the Abomination.

Find out more about She-Hulk

Moon Knight is about a vigilante who has a military background and powers that are dependent on the moon’s lunar cycle. Oscar Isaac is reportedly in talks for the titular role, making his formal debut in the MCU after playing Apocalypse in the X-Men Universe and Spider-Man 2099 in Spider-Man: Into the Spider-Verse.

This isn’t the first time Marvel has attempted to bring the character to the small screen; way back in 2006, two years before Iron Man, Marvel discussed a potential series, but that fell through. Guardians of the Galaxy director James Gunn then revealed that he once pitched a Moon Knight movie, but it never came to be.

The Umbrella Academy‘s Jeremy Slater has signed on to lead the writers’ room for the series, while Egyptian filmmaker Mohamed Diab has been tapped to direct.

Find out more about Moon Knight

Samuel L. Jackson continues his tenure in the MCU as Nick Fury in this new series, which will seemingly pick up after the end credits scene of Spider-Man: Far From Home, in which Talos (Ben Mendelsohn) revealed he was shapeshifting as the S.H.I.E.L.D. director. Secret Invasion will showcase a whole faction of Skrull aliens who have been infiltrating Earth for years.

In this new Disney+ series, Dominique Thorne will play Riri, a genius inventor who creates the most advanced suit of armor since Iron Man. Consider her the next-generation Tony Stark (Robert Downey Jr.).

Armor Wars will explore Tony Stark’s worst nightmare, with Don Cheadle returning as Rhodie (aka War Machine) to clean up the mess when Stark’s tech ends up in the wrong hands.