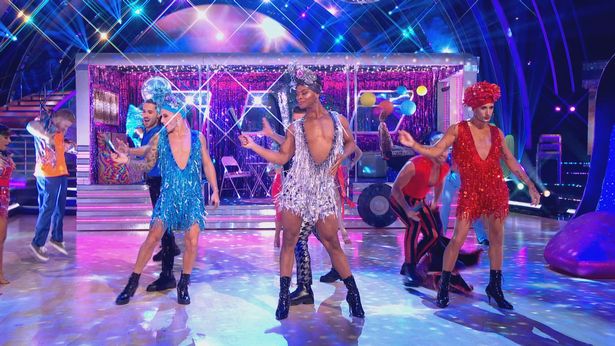 Some fans threatened to boycott the show while others hailed Saturday night’s routine as the best group dance in the programme’s history.

BBC bosses were proud of the dance, inspired by Priscilla, Queen of the Desert, which kicked off musicals week.

Former Strictly professional James Jordan, 42, who is married to ex-pro Ola, waded into the row by declaring: “I have to say I’m glad I never had to dance in a pro dance like that.

“I’m sure many of you enjoyed it, which is fine, just not my style.”

But some fans vowed to stop watching after Joh­­annes, 33, emerged in a sparkly silver mini-dress, make-up and high heels in homage to Priscilla, the hit film and stage musical.

One moaned: “Used to be a family show. Will stop watching. It is one thing to support equal rights and completely another to promote homosexuality.”

Others branded the performance “disgusting” while some said it was not traditional dancing. But the routine, which also featured Gorka Marquez and Graziano Di Prima in dresses and heels, was a hit with some.

One viewer gushed: “Gorka as a woman… stunning!”

A show insider said of Saturday night’s routine: “The boys loved doing it so much. Last year Karim dressed up as a panda and Stacey was a minion.

“If people can become an animal or a cartoon on the show, then what’s the difference putting on heels and make-up to do drag?”