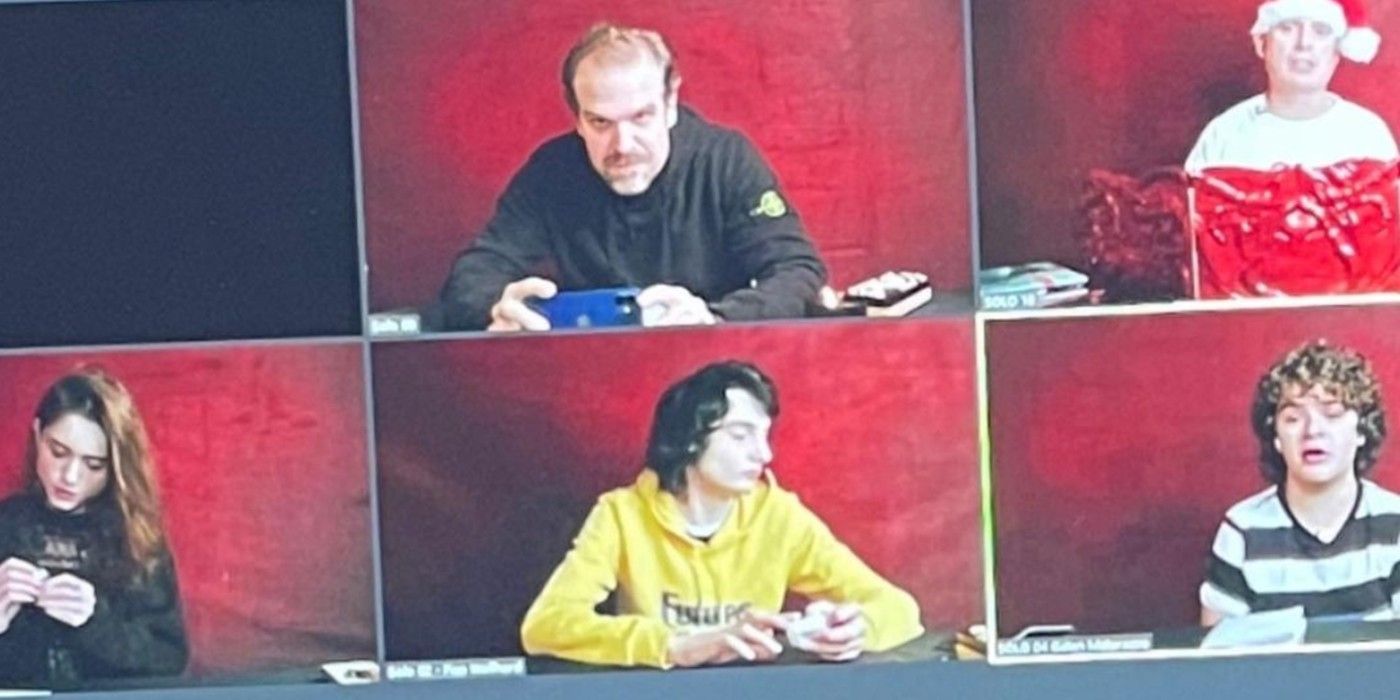 The Stranger Things cast unites to play D&D virtually, proving many are just like the characters they play on their hit Netflix show. An ode to 1980s sci-fi and adventure films, Stranger Things began in 2016 and practically became an overnight sensation. For its first season, Stranger Things delved into a compelling mystery: The disappearance of young Will Byers (Noah Schnapp), which had ties to an eerie realm known as the Upside Down and a powerful girl named Eleven (Millie Bobby Brown). Since then, Will has returned, Stranger Things has dropped three seasons, and the mysteries of the Upside Down keep coming. Production on season 4 is currently underway.

Right from the beginning, Stranger Things cemented itself as a celebration of nerdy culture. Fans first met Will and his friends as they were playing Dungeons and Dragons, and there have been numerous Easter eggs scattered throughout the three seasons for fans to enjoy. Stranger Things‘ popularity has actually grown to encompass different spaces within the pop culture realm, including several comic book series. In fact, the latest comics run features the Stranger Things characters in their first D&D game together.

Fiction meets reality in this new post from David Harbour (Sheriff Jim Hopper), which sees him teaming up with his younger co-stars in a virtual D&D game. Fans can spot Natalia Dyer (Nancy), Finn Wolfhard (Mike), and Gaten Matarazzo (Dustin) in the various Zoom screens, all preparing for their upcoming adventure. Harbour also shared a text conversation he had with Wolfhard, in which both seemingly struggle with technology, and the D&D logo. Harbour wrote, “‘Tis the season for both young and old dorks to meet in a tavern and attempt to slay mighty technical glitches.” Check out the post down below.

The similar red backgrounds behind each cast member seems to hint this is more than just a casual game between friends. Could they actually be filming this for a promotional video? Possibly. Netflix has a tendency to release fun videos with their various stars, and the Stranger Things cast playing D&D would be an excellent addition to their channel. Only time will tell if anything further comes from this, but even if it doesn’t, it’s a sweet glimpse into the cast’s offscreen activities.

Stranger Things season 4 was originally slated to premiere in early 2021, but the coronavirus pandemic delayed production and thus the entire season. The series was able to pick up work in the fall, and provided it remains on track going forward, fans might be able to see the new season in late 2021. The end of season 3 left behind numerous questions, particularly about Harbour’s Hopper. Hopefully, new information about the season will emerge soon. In the meantime, perhaps Stranger Things fans can play some D&D to get in on the fun.