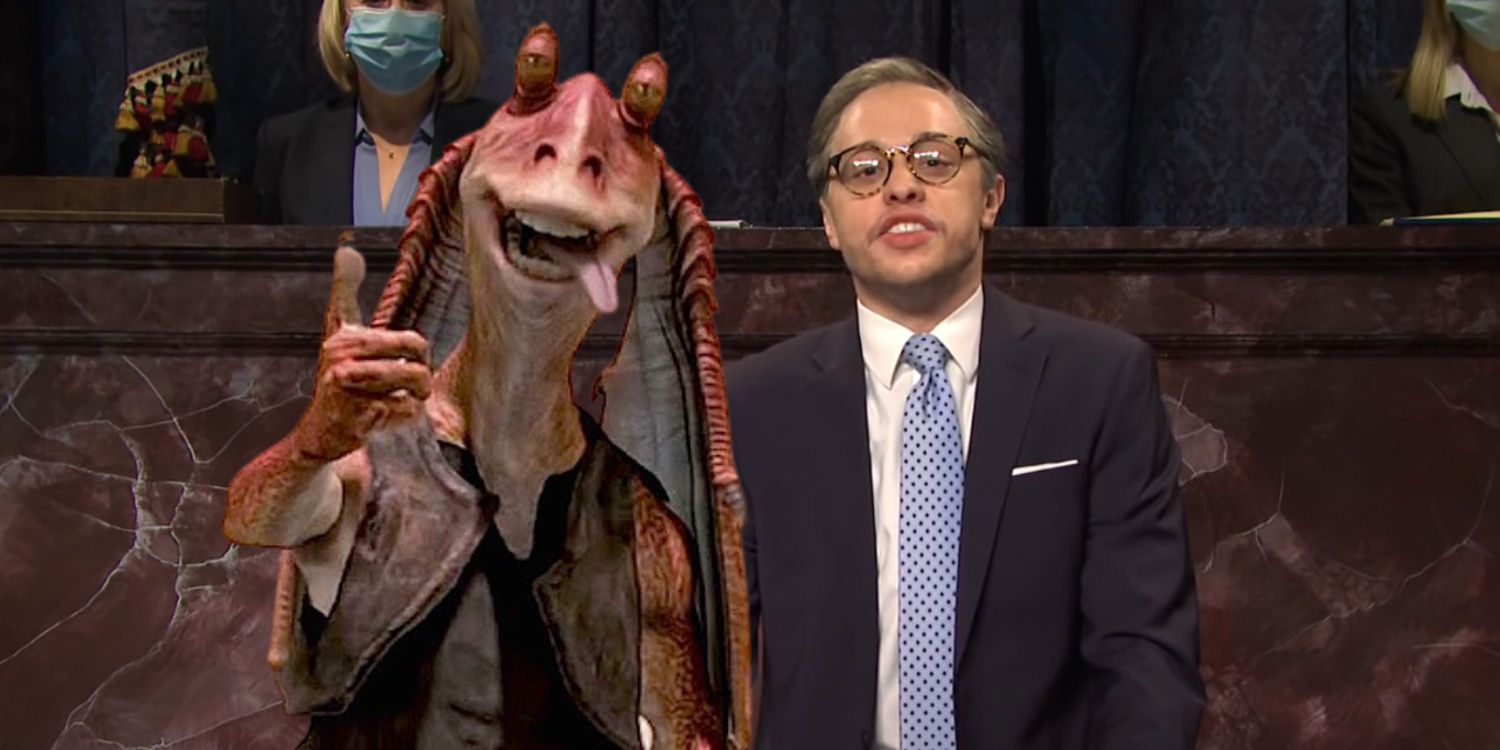 Saturday Night Live mocked the second impeachment trial of Donald Trump with an edited video that included clips of the Minions and Jar Jar Binks from Star Wars. This was a nod to a questionable video produced by the former President’s lawyers as part of his defense, which featured recordings of several prominent Democrats repeatedly saying the word “fight.”

Before ending his only term as President of the United States, Donald Trump was impeached for a second time by the House of Representatives on a charge of insurrection. It was the contention of the Representatives who filed the charges that he had incited a riot during a speech on January 6, 2021, leading to a violent mob storming the Capitol with the intention of stopping the official Congressional acknowledgment of the 2020 Election results, which confirmed Joseph Biden as the 46th President. While the former President was easily impeached within the lower House of Representatives, the United States Constitution requires that the impeachment trial occur within the Senate and that two-thirds of the Senators must vote in favor of the impeachment for it to result in a conviction and/or removal from office. As a result, the Senate hearings were a foregone conclusion, as it seemed unlikely enough Republicans would break ranks with their party to vote against the former President and ensure a conviction.

The opening sketch of the latest Saturday Night Live episode made reference to the ludicrous tone the Senate trial had acquired, with a parody of the Fox News program Tucker Carlson Tonight. Alex Moffat played the titular host, who interviewed several Republican Senators regarding how pleased they were with the trial, before showing footage of the “winning” defense. The footage mocked how ill-prepared the former President’s lawyers seemed to be and one of the odder points of the defense, which contended that the former President’s political rivals were equally responsible for encouraging violence, with a montage of random clips of prominent Democrats saying the word “fight.” The sketch can be viewed in full below, with the montage beginning at the 5:13 mark.

While it was difficult to exaggerate the absurdity of this moment, Saturday Night Live tried their best by inserting other clips of people saying the word “fight” into the montage of clips of Vice President Kamala Harris and Speaker of the House Nancy Pelosi. These included Lady Gaga singing the word “fight” as part of “The Star-Spangled Banner” at President Joseph Biden’s inauguration, Brad Pit (as Tyler Durden) in a clip from Fight Club, a scene from the first Karate Kid movie and a slap fight between two of the Minions from Despicable Me, which was cheered on by their fellow Minions chanting the word “fight.” The montage concluded with Jar Jar Binks saying “Gungans no dyin’ without a fight” and defense attorney Michael van der Veen (played by Pete Davidson) stating “Meesa rest my case.”

While Saturday Night Live made light of the impeachment trial with these clips from Star Wars and Minions, this dark chapter in American history cannot be easily laughed off. The Senate hearing was a bigger farce than anything Loren Michaels produced in 46 seasons of Saturday Night Live. Thankfully, while the Senate may have faltered in their duty, there is nothing they can do to shield the former President from the trials that await him in numerous state criminal courts and it seems certain that the name of Donald Trump will only live on in infamy.