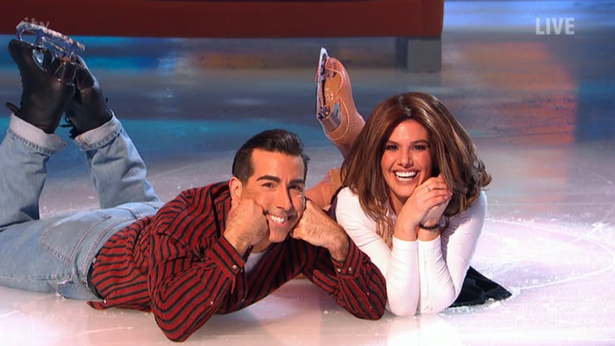 Dancing On Ice viewers have claimed the judges are favouriting Rebekah Vardy over the other celebrities, with many saying Faye Brookes is marked too harshly and others believe Amy Tinkler, who was voted off, was “robbed”.

Faye’s stumble at the start of the routine did not go unnoticed by the judges and host Phillip Schofield pointed out they “almost ran out of rink” as they misjudged the distance.

Ashley said: “I would love to score you higher but I keep asking the same thing and that’s to excite me, with choreography, tricks, the connection between you, I really want you to come out here and shock me.

“And you had a stumble didn’t you, and then the sequence was out of synch.”

John added: “I thought Faye that you rushed a lot of it, you’re going ahead of things and Hamish is trying to pull you back, you also had a stumble so I had to judge you based on that, you’re a better skater than it.”

Another ranted: “The judges are truly delusional. Faye is by far the superior performer. Amy was also better than Colin and Rebekah. Horrendous.”

“How on GOD’S GREEN EARTH are they scoring Rebekah higher than Faye? They’re not even comparable. Rebekah gets flung around the ice, but Faye actually skates. Faye and Sonny should be joint top,” ranted a third.

Others remarked: “Lady leshurr and faye were robbed. deserved higher scores. # DancingOnIce ” and “amy robbed bc rebekah should’ve been in the skate off over lady leshurr”.

* Dancing On Ice airs Sunday nights on ITV at 6pm