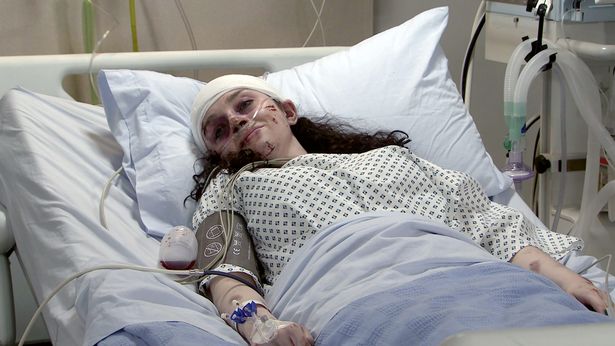 In upsetting scenes on Coronation Street this week, Nina Lucas and Seb Franklin will be left fighting for their lives after a brutal attack.

In a sickening twist, goth Nina and her boyfriend Seb are cornered by a gang of vile thugs and mercilessly beaten by a vile gang of drunken thugs led by prejudiced Corey Brent.

After having abuse hurled at her for the way she looks, Nina and Seb are chased in an unprovoked attack which leaves them battered and bruised in hospital.

The horrifying hate crime storyline is based on a real-life attack which resulted in the tragic death of teenager Sophie Lancaster, who was senselessly murdered simply because she looks different.

“I couldn’t believe it. Why on earth would someone want to attack that little girl who was so pleasant, so kind, so caring,” said Sophie’s mother Sylvia Lancaster.

Sophie and her boyfriend Robert Maltby were walking in a park in Bacup, Lancs during the early hours of August 11, 2007 when they were beaten by a gang of teenagers.

“It was very important to work with Sylvia and the foundation. It’s a powerful story that still needs telling,” he said.

The Corrie boss has discussed the importance of tackling this storyline and where it is going in the future.

“The issue of intolerance and hatred towards people from different cultures and subcultures is arguably more relevant now than it’s ever been,” MacLeod added.

“This incredibly hard-hitting storyline, which centres on a senseless act of violence, will draw in characters from all corners of our narrative universe and will, we hope, leave the audience with a clear message: everyone, regardless of how they look, how they dress or any aspect of how they live their life, should be treated with tolerance and respect.

“The story will run across the rest of the year and beyond, with many twists and turns, and will be heartbreaking and dramatic in equal measure. In the end, the story will see an optimistic outcome emerge from the traumatic attack.”