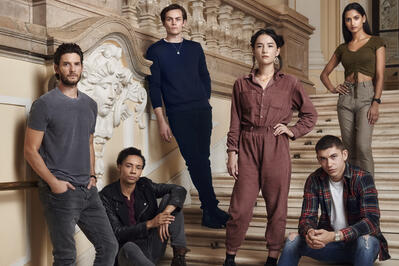 It’s a good time to be a Grishaverse fan! Netflix’s Shadow and Bone adaptation is on the way, and the streaming platform has begun releasing information about the upcoming series, which wrapped production back in March, before COVID-19 shut down Hollywood. TV Guide is here with all the latest scoop on this highly anticipated new series — including when it will finally premiere!

Based on Leigh Bardugo’s bestselling book series Shadow and Bone and Six of Crows, this Netflix Original promises to bring to life the novels’ fantastical world of magic, romance, and monsters. Set in what fans of the books call the Grishaverse, Shadow and Bone takes place in a world cleaved in two by a magical expanse of darkness known as the Shadow Fold. The story follows Alina Starkov, a young soldier who discovers her own hidden power could finally unite her divided country, but political and magical machinations threaten to overwhelm Alina as she struggles to hone her new power.

Six of Crows, on the other hand, is more of a heist adventure, focusing on a gang of criminals constantly on the hunt for their next job and the next big score. The synopsis of the series previews a union of these two worlds, teasing, “Thugs, thieves, assassins, and saints are at war now, and it will take more than magic to survive.”

When does Shadow and Bone premiere?

The series will premiere in April 2021, as Netflix confirmed in the above teaser for the fantasy series. An exact release date hasn’t been set, but the teaser gives us an ominous preview of the series, with Ben Barnes as the Darkling saying “You and I are going to change the world.”

Who has been cast?

Netflix has announced a ton of casting for the upcoming series, and it’s full of one or two very familiar names, as well as a lot of fresh faces.

On the Shadow and Bone side of things, Jessie Mei Li will play our heroine, Alina Starkov. Ben Barnes has been cast as General Kirigan, aka the Darkling, and Archie Renaux has been tapped to play Alina’s childhood friend (and love interest) Malyen Oretsev. Other members of the cast of Shadow and Bone Season 1 include Sujaya Dasgupta as Zoya Nazyalensky, Daisy Head as Genya Safin, Zoë Wanamaker as Baghra, Kevin Eldon as the Apparat, Luke Pasqualino as David, Julian Kostov as Fedyor, Jasmine Blackborow as Marie, Gabrielle Brooks as Nadia, and Simon Sears as Ivan.

As for Six of Crows, Freddy Carter has been cast as Kaz Brekker. He’s joined by Amita Suman as Inej Ghafa and Kit Young as Jesper Fahey. Calahan Skogman will play Matthias Helvar, and Danielle Galligan will play Nina Zenik. The one major character from Six of Crows whose casting has not been announced is Wylan Van Eck.

If you want to put faces to names, Leigh Bardugo posted a cute roll call video on Instagram, featuring all the actors announcing which characters they play.

What is the plot of Netflix’s Shadow and Bone?

Based on the released synopsis, the show will find its focus in the first novel of the Shadow and Bone series, as Alina discovers her power and realizes she is a Grisha — someone born with magic. She is whisked away by the Darkling (the Grisha leader) to study with other Grisha so she can use her power to destroy the Shadow Fold, a massive barrier of darkness that cuts her country of Ravka in two.

How will the two worlds of Shadow and Bone and Six of Crows work together?

Though Shadow and Bone may be the title of this TV series (after Bardugo’s first Grishaverse novel), Six of Crows fans won’t be left out in the cold, since Season 1 will attempt to merge both of Bardugo’s book series into one narrative. The Six of Crows novels follow a criminal gang in Ketterdam (a city of industry outside Ravkan territory) as they take on a mission to rescue a prisoner held captive by one of Ravka’s neighboring enemies.

Showrunner Eric Heisserer revealed in Dec. 2020 that he and Bardugo created prequel stories for the main Six of Crows characters in order to introduce them in the new series, allowing the audience to get to know them even though the events of Six of Crows will not play out on screen until the series finishes the Shadow and Bone trilogy story. “What Leigh [Bardugo] and I had to do was essentially invent prequel stories for the key Six of Crows characters this season — Kaz, Inej, and Jesper — to fit alongside what is happening in the Shadow and Bone storyline,” Heisserer explained in a statement. “That’s been the heavy lifting.”

“We’ve taken the stories of Shadow and Bone and the characters of Six of Crows and we’ve brought them together in what I think will be a really unexpected way,” Bardugo said in a statement. “Eric [Heisserer] and our writers’ room and our directors have built something entirely new that still somehow stays true to the characters and to the heart of the stories. And it wasn’t easy! Eric took two fantasy series — with powers and creatures and horrors and heists — and molded them into this cohesive, incredible thing.”

Heisserer also teased that characters will cross paths who don’t meet in the books. “I get most excited talking about certain characters meeting certain other characters — meetings that don’t happen in the books because they’re set on different timelines,” he said. “But they happen in the show, and I believe those moments are meaningful.”

How many episodes will it have?

Season 1 will consist of eight episodes.

Is there a trailer?

Netflix has not released a full trailer for the series yet, but you can watch the date announcement above.

Shadow and Bone premieres in April 2021 on Netflix.