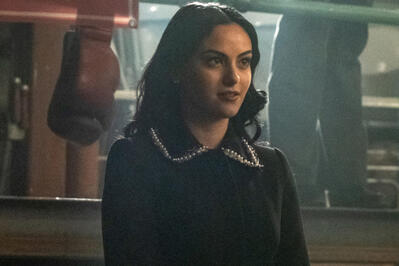 It is almost time to head back to Riverdale!  The series ended its fourth season prematurely in March, and we can’t wait to resume the madness from where we left off. In the episode that became the Season 4 finale, the gang was sent a creepy video of “themselves” killing Principal Honey (Kerr Smith). That disturbing ending was not the originally intended finale for Season 4, but due to the COVID-19 pandemic, production was forced to shut down early. The season wrapped three episodes early with Episode 19, “Killing Mr. Honey,” depriving us of the anticipated prom and graduation episodes.

The Season 4 episodes we didn’t get to see will kick off the new season, which is now premiering this year. As Hollywood is slowly getting back to work, more details are being revealed about what to expect from Season 5. Here’s everything we know so far…

We have a premiere date: Riverdale Season 5 will officially premiere on Wednesday, Jan. 20, 2021 at 8/7c and will lead into a new season of Nancy Drew.

Filming began in September, but had to pause: After a long hiatus, Riverdale is back in production in Vancouver. Mädchen Amick posted her annual first episode of the season table read selfie. While everyone was socially distanced and remote for the read-through, show creator Roberto Aguirre-Sacasa confirmed with a very steamy photo that filming began on Sept. 14.

However, Riverdale, along with several other Vancouver-based productions, were forced to pause production less than a month in when British Columbia reported a backlog in COVID-19 tests. Production resumed again in October, keeping the show on track for its January premiere.

Senior year will continue in Season 5. The Season 4 finale was supposed to see Archie and his friends graduate from high school and plot their futures together, but due to the production shutdown, a few senior year rites of passage still needed to be filmed — and we will get them in Season 5.

“We’ll do prom as our season premiere next year,” Aguirre-Sacasa told TV Guide. “I love that we’re not short-changing things like prom and graduation. We’re saving them to do them next year.”

A big time jump is happening. Mädchen Amick revealed to TV Guide that Riverdale was “planning on a bit of a time jump, after [the teens had] all gone off to college and something brings them back to the town,” but those plans were put on hold with the abbreviated season.

“We’re talking about what we can do [in the writers’ room],” Aguirre-Sacasa told TV Guide. “Usually, time jumps are the best when they happen in between seasons, but we’re definitely talking about all of our different options.”

Aguirre-Sacasa told TVLine that the plans for a time jump are still in the works, saying, “What we’re doing is picking up right where we left off for the first three episodes, and then doing a time jump… after those three episodes.”

That means we won’t be saying goodbye to FP or Hermione just yet. In February, news dropped that both FP Jones (Skeet Ulrich) and Hermione Lodge (Marisol Nichols) would both lose their series regular status in Season 5, which makes a lot of sense given the time jump. However, since we’ll still be in the kids’ senior year when Season 5 kicks off, we will get to see both of the adults again and give them a proper goodbye.

“Marisol already knew what we had planned for Hermione and really loved it, and wanted to make sure we weren’t going to change that [in light of the shutdown] — which we weren’t,” Aguirre-Sacasa explained. “Skeet was completely down…Neither character dies. My hope is that they’re a part of Riverdale as long as there’s a Riverdale. Even as we talk about stories for Season 5, if Hermione and FP fit into those stories, we’re writing them that way and hopefully, we’ll be able to use them, depending on what other commitments they have.”

Veronica has a new man in the future: Veronica (Camila Mendes) will have a new man in the future. According to Deadline, Chris Mason (Broadchurch) has been tapped to play Veronica’s husband beginning in Episode 4 when the show will time jump seven years ahead. His character is named Chad Gekko, a “controlling and jealous” Wall Street banker — related to Gordon, perhaps? — who is not a fan of Veronica’s friendship with Archie and her life in Riverdale.

Pop’s granddaughter is coming to town: The Resident alum Erin Westbrook will be joining Season 5 as Tabitha Tate, Pop Tate’s granddaughter who has big plans to franchise the iconic chock’lit shop even as Riverdale struggles to survive around the establishment, per Deadline.

More Fangs, please!: We will also be seeing a lot more of Fangs in Season 5. Aguirre-Sacasa confirmed via Instagram that Drew Ray Tanner had been promoted to series regular for the upcoming season, writing: “Thrilled with this news!! @drewraytanner is a series regular on #Riverdale starting this season!!! Fangs Fogarty has come a LOOOOONG way from the comic books!!!”

Jughead and Veronica will find out about Barchie. Season 4 had Bughead and Varchie shippers’ heads spinning when Betty (Lili Reinhart) and Archie started getting closer. They pretended to date to save Jughead from the Stonewall preppies, but then actually cheated on their significant others during the musical episode. That illicit kiss will not stay secret for long in Season 5.

“Neither Veronica nor Jughead have found out about [Betty and Archie in Season 4],” Aguirre-Sacasa said. “I don’t know if this is a spoiler, but I can tell you that they definitely will find out in very different ways. I don’t think it’s the end of the drama, or it’s the end of the love quadrangle by any stretch of the imagination.” The Riverdale ship war continues.

The Best Teen Shows to Watch on Netflix

The voyeur has a “personal” reason for videotaping everyone. A lingering mystery from Season 4 is the mysterious voyeur sending disturbing videotapes to everyone in town. Aguirre-Sacasa says the identity of the voyeur will be revealed in Season 5, and that they will have a personal reason for making the tapes and forcing the teens to face all the trauma they’ve experienced over the past three years before they move on to college.

Riverdale returns next season on The CW.