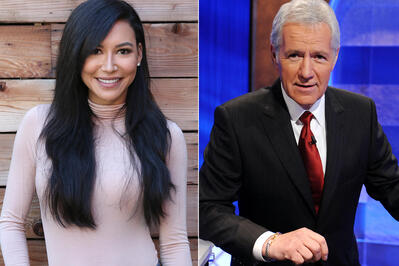 As we look back on 2020, it is staggering to think about the sheer volume of lives lost. This unrelenting year has been unlike any other because of the COVID-19 pandemic and the endless number of people who lost their fight against the virus. That’s in addition to the many people lost to other causes.

There were immense losses in every field. There was the sudden death of basketball legend Kobe Bryant in a helicopter crash in which his teenage daughter Gianna also perished. Naya Rivera’s death by drowning shocked everyone as we learned how she protected her son and lost her own life in doing so. The passing of Chadwick Boseman from colon cancer was the snuffing out of a bright light in Hollywood; a talent who would surely have gone on to even bigger and better things after the colossal success of Black Panther. And then, Alex Trebek lost his long battle against pancreatic cancer shortly after he completed filming an order of Jeopardy episodes.

The coronavirus hit the entertainment industry hard, including the loss of songwriter-performer Adam Schlesinger, best known for his work on Crazy Ex-Girlfriend, for which he wrote many of the show’s 157 original songs with Rachel Bloom and Aline Brosh McKenna. He was also a co-founder of the Fountains of Wayne, and wrote hit pop songs like “Stacy’s Mom.” Also in the musical realm, Broadway actor Nick Cordero put up a valiant fight but was unable to beat COVID19. The virus also claimed legendary country singer Charley Pride’s life.

We also lost true entertainment icons. Talk show host Regis Philbin was a man who was welcome in everyone’s living rooms, probably because there was barely any time he wasn’t on TV once his career began and he holds the Guinness World Record for the most hours on U.S. television. Another TV pioneer, Carl Reiner, also passed this year. Reiner was one of the people responsible for sitcoms as we know them. Did you know he created and wrote the first 12 episodes of The Dick Van Dyke Show all by himself, and he also created Alan Brady, the terrifically funny character for himself in that same show. Reiner’s work as a film director were also comedic successes: check out The Jerk starring Steve Martin and All of Me starring Martin and Lily Tomlin. Silver screen icon Sean Connery also passed this year and though he’ll be remembered first and foremost as elegant super spy James Bond, Connery’s body of film work included much more than Bond films. His towering presence is also remembered in films like The Man Who Would Be King, The Rock and Hunt for Red October.

It’s difficult to process a year like this one that’s filled with a constant barrage of grief. Many of us take solace and find comfort in the TV shows and movies we love. Our hearts are hurting for those we lost but we’ll always smile when we watch or listen to their wonderful works.

Click through TV Guide’s in memoriam gallery to remember more stars we lost in 2020.