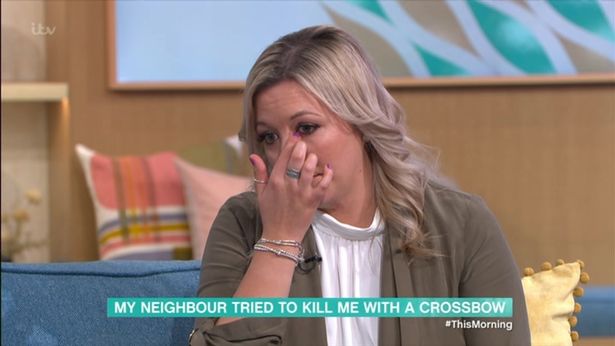 A pregnant mum who survived being shot in the head with a crossbow was in tears as she spoke about her dying partner’s final words to her before she managed to escape their murderous neighbour.

Laura Sugden had been 27 and five months pregnant when her deranged neighbour Anthony Lawrence broke into the semi-detached house that she shared with boyfriend Shane Gilmer.

Lawrence, 55, had managed to get into the property through their shared loft and lay in wait for the couple to return.

He went onto launch a frenzied attack as he shot both Laura and Shane with his crossbow. While Laura and her unborn daughter miraculously survived, Shane tragically did not.

Appearing on This Morning, Laura, now 30, said that there had never really been a feud between themselves and Lawrence, though Shane had asked him to turn his music down.

“But you had to get out – what were the last words that he said to you?”

She replied emotionally: “Be strong, I love you.”

“And get out to save the baby,” Phil supplied.

The only thing that has helped with Laura’s grief over Shane’s death is the birth of their daughter.

Laura is now campaigning for there to be regulations in place for owning crossbows.

“There’s no regulations to have a crossbow,” she said. “They’re just as fatal and they’ve caused a number of injuries.”

Laura previously told The Mirror that Shane would have wanted her to be happy and has been dating someone else on and off for a year.

But she said: “It’s hard for him because I’m still in love with Shane.

“We were madly in love and worked at the same place and were hardly ever apart. The honeymoon period never went away.”

“I don’t believe you ever get over something like this. I can’t imagine the grieving ever comes to an end.”