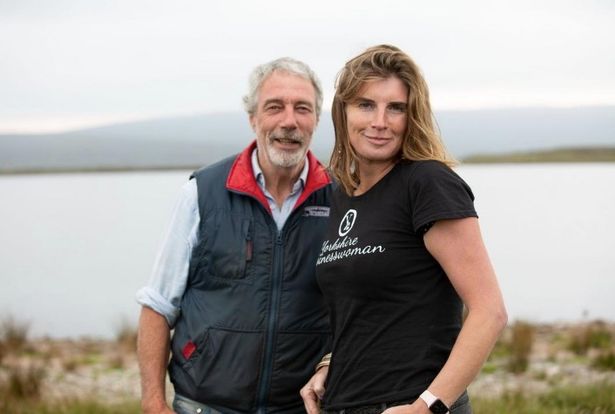 Our Yorkshire Farm star Amanda Owen has experienced some rather unusual births.

The 46-year-old shepherdess has given birth a whopping nine times to her children Annas, Violet, Edith, Raven, Clemmy, Nancy, Reuben, Miles, and Sidney.

Staggeringly, six of her kids were born at the roadside as Amanda lives on the family’s farm in Ravenseat, Upper Swaledale, which is a lengthy 69 miles away from their nearest hospital in Middlesbrough.

Amanda joined the farm 25 years ago as a trainee shepherdess aged 21 when she first met husband Clive, who was divorced with two of his own children at the time.

Clive, 67, was present for births of their first seven children but missed the eighth for a somewhat unusual reason.

Rather than make the long trip to the hospital, Amanda laid down in front of the fire and bravely gave birth alone with only one of the family’s dogs for support.

On last week’s episode of Our Yorkshire Farm, we saw Amanda get shut down by her son Reuben while discussing his lockdown-affected GCSE results.

There was good news when the teenager arrived home to reveal he had passed all his exams with flying colours.

Reuben explained that he got a 6 maths, which was a grade B in the old GCSE scores, but his mum wanted to know if that was a good mark.

The teen replied: “Anything four and above is a pass. I got nothing below a four so I passed it all. I got a five in English language, a six in design and technology.”

When Amanda asked if that was the best score he could get, Reuben replied: “Oh, don’t go into that,” before shutting down requests from his mother to explain how the new grade boundaries worked.

Despite the confusion over the new grades, parents Amanda and Clive were very pleased with their son’s results.

*Our Yorkshire Farm airs tonight on Channel 5 at 9pm