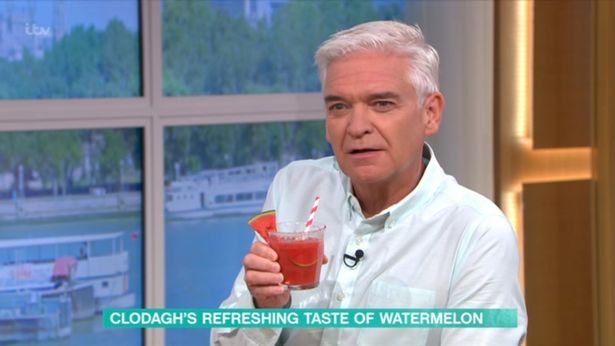 Phillip Schofield wasn’t taking any chances on This Morning on Tuesday, as chef Clodagh McKenna returned to the show.

A week ago, she hilariously dropped the S-bomb live on air after spilling a cocktail.

Clodagh returned to the studio on Tuesday, to create all sorts of alcoholic beverages and treats out of watermelon.

But Phil was keen to get a warning in before she started, to ensure no awkward slip-ups this time around.

As she prepared to start her segment, he quickly said: “And don’t swear today, eh?”

Clodagh was caught off guard by the remark, fearing his reminder would trigger the same event again.

“This was Holly’s idea, it’s vodka, elderflower cordial, ice and fresh mint, I added fresh mint into it, because I just thought it would be so good,” explained Clodagh.

She then began to throw it around in the cocktail shaker but it was not shut properly and the cocktail spilled everywhere, with Clodagh exclaiming: “Oh s**t!”

She then covered her mouth as she realised what she had said, with Holly Willoughby and Phil bursting out laughing.

“I’m so sorry! I’m so sorry!” she laughed, as Phillip quipped: “She does tend to forget she’s actually on telly!”

“Oh well! It happens, who out there has never said that word in their life? Let them be the first to cast the stone!” said Clodagh.